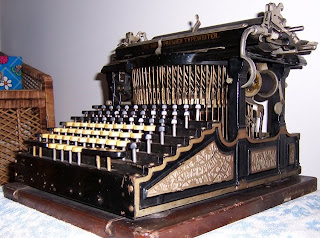 OK, get this for a coincidence. We have had this kind of luck more than a few times in our antique careers, but never more, well, significant than this time.
While Will was far away buying the machine you saw in the previous post, my wife and I found and bought the machine you see here.
That is to say, while Will was buying the last standard machine associated with the Smith Bros. second company, we were buying the very first machine associated with their FIRST company. So, in ONE DAY, we have Alpha and Omega, so to speak. 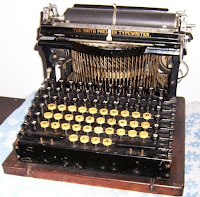 Once again, as has happened to us so many times with significant machines, this was found in a large antique mall, which usually does not yield a lot of typewriters. This time, this "first variant" Smith Premier No. 1 (no platen knobs) serial no. 22577, was there, along with several other typewriters which we did not buy. One was a mint Royal Arrow with instructions, another a Consul 232 in sky blue, also very nice. An Underwood standard, Remington portable, and a couple others rounded out the selection. Even in this "EBay era", it can still pay off to get out and look on foot!
But how weird is this? On the same day, in the same state, Smith Premier No.1 and SCM Smith-Corona 76 Secretarial? One of those almost every serious collector has certainly heard of, the other probably almost no collector has heard of. They represent the bookends of a family history, spanning nearly the entire era of standard sized manual office machines. One of them, we have seen very few of, the other, only ever ONE of so far. Which is the "rarer" machine? The 76! More collectible? The Premier to be sure. But for Will and I, being interested in the stories and the people and companies behind the machines, the 76 is a significant find too. Maybe somewhere the Smith Brothers are smiling tonight, as for the first time ever a No. 1 and a 76 sit side by side together.