We take a break from our ongoing installments in the "ABC in Detail" series to cover some breaking news from the other side of the world.. Australia!

Chris Ronayne has reported to us today the discovery (and thankfully the purchase) of a heretofore unknown name variant typewriter.

This machine carries the label "Cherryland," and was purchased from an antique store very recently in Morpeth, New South Wales, Australia. Chris reports that although the owner of the shop noted that the machine was of good quality, and was worth around $70 AU, he was able to purchase it for $60 AU. We like that! Let's take a look at it now. 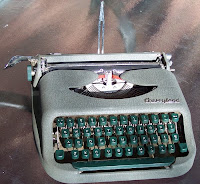 At left, the Cherryland. This picture blows up larger than usual for this site, since it's a one of a kind label. This machine's serial number is 401670. Quickly notable are the machine's distinctive green hue and green keytops; note also the gull wing ribbon spool covers, or doors and the markings on the margin release key at the top left of the keyboard. These are all the hallmarks of the very earliest NIPPO machines, from Japan .. and in fact we can very nearly match this new find with a known machine, already on the net, that most of you will probably know. 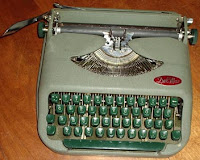 This is the Del Mar, from my collection. This machine is serial number 400455 which is only about 1200 units earlier than Chris' newly found Cherryland machine. This coupled with the fact that the new discovery is in Australia nails the heritage of the new find.

There is something inherently pleasing to the eye about these early machines - in fact, this shape is almost deliberately totally contradicted in every way by the very ultra-modern design of later Nippo machines. The body shape on these early Nippos is very like the shape of the last variant of Halberg Traveler, on which these are based, and the early Royal portables derived from the Halberg after Royal bought out and integrated that operation into its own and began distributing the machines made to that design all over the world -- a very early case of typewriter outsourcing, as it is now called here!

The earliest of these Nippo machines are always all-green, with green keytops. There is some rough indication by way of illustrations found in instruction manuals that there might have been a gray color used as well, but none are yet known.

Above, a page from the instructions found with the "Graduate," which we'll see in a moment. Note all the distinctive early Nippo features and the typical zipper carry case. No other style of case is known for these machines -- yet!

At left, the Graduate. Also from my collection, with serial number 602777. This machine is still all green, with the green keytops but has a more conventional double arrow marking on the margin release key. Also still has the typical gull-wing doors.

The second phase of production in this body is found in smooth-surfaced, glossy and very attractive enamel paint. The Japanese were very adept at manufacturing very fine looking machines for home use - they'd learned this with their sewing machines. The painted surface on these later units is very like that of many sewing machines in my collection. However, the machines themselves remained unchanged. 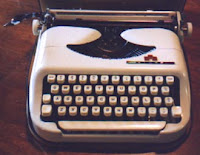 This machine, also from my collection, carries the name ATLAS and is serial number 709985. This machine actually has something in common with the Cherryland - it was discovered in Australia! This was the very first typewriter I ever bought on an overseas auction, quite a number of years back. It was the first early style Nippo identified, and was our first hint that there was someone in Japan other than Brother, Nakajima and Silver-Reed making manual portable typewriters. Note the white keytops and overall smooth paint.. but otherwise this is still the same machine.

Of course, machines like this were sold in the United States as well. 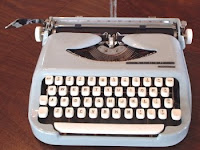 At left, another one of my machines, the Elgin Collegiate. Serial number 711207. This machine's name seems tied to the Elgin Watch concern; there were very many companies that tried very brief shots at typewriter sales and distribution in the 1960's here in the United States, especially because batches of fairly inexpensive foreign-made typewriters seemed to make a good short-term profit plan workable. This helps explain why so very many unusual or 'off brand' portables with odd names are very hard to duplicate here; not too many were sold and very often there was no second batch for many distributors. This seems to fit many machines made and distributed by Nippo - and might fit the Cherryland too as a scenario!

Many thanks to Chris Ronayne for telling us about this machine, for showing it to us and for allowing me to present it here on the Davis Typewriter Works blog for the first time.

For more unusual portables sold in Australia, check out this link!
Posted by Will Davis at 4:04 PM