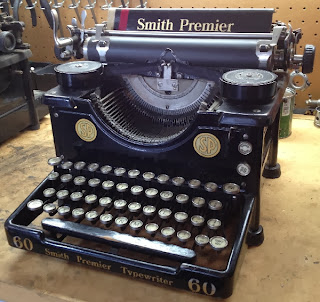 We've filmed another video in our "Typewriters 301" series, which is an in-depth examination of typewriters for those really interested in these machines -- and particularly, their design and manufacture.

This video concerns a design alteration we've commented on before - the changing of a given design of typewriter from having (early style) individual type bar bearings to having a (modern style) slotted segment.  The change wasn't always easy by any stretch, but may have allowed more of the machine to remain the same than one might originally have thought.

All is revealed in this new ~15 minute video.  Click here to see it!

Good question.  We might consider 101 to be basic use of typewriters, comparison between portables and standards, knowledge of some of the basic brands.  201 might move to knowledge of tooling for certain machines having been moved from place to place, rebrandings, non-standard typewriter designs (as they're considered now, like upstrikes or thrust action machines) - more in depth than what the person only interested in writing and basic collecting would be interested in.  301 is our placement for typewriter engineering and manufacturing as a focused, in depth study.   We just kind of stumbled on this college-like delineation during an earlier video and now we've stuck with the 301 label to signify the most involved, complicated studies of these objects as machines.

We're making this series for everyone, however ...   What's important is that people feel as if they have a place to learn the secrets of these machines, and that's what we're doing with this series.  We deliberately slow down and really investigate certain features or changes, certain methods of manufacturing or assembly and discuss the implications discovered therein.  In this way, the knowledge we've obtained can be both recorded and passed on.

We also realize that many people don't get much chance to talk with other collectors face to face .. except for annual or semi-annual meetings, or the occasional type-in.  These videos allow collectors and enthusiasts to immerse themselves in typewriter-related themes for just a short span at a time.  You're not alone in this hobby - interest - obsession!

We do have another video shot, but I haven't processed it yet for upload.  I'd like to note for those who have not noticed that we do these all in one take, with no script and no editing.  We have a rough and brief, loose plan for what will happen, and then I turn on the camera and we just GO.   We think that makes the best and most entertaining video style -- and the most informative.