The Mystery from the Great Typewriter Gathering


As regular readers of this blog are well aware, earlier this year I had the good fortune to win the Visigraph you see above in open auction.  The machine created a bit of buzz in collectors' circles because it is not a previously known example - in other words, it isn't as if I'd acquired the machine from another collector.  This was a fresh find, and makes only the 13th known surviving example of this make.

At the now-well-known Gathering (an event so momentous, it surely must be capitalized) held earlier this month by Herman Price, we had the good fortune to have an unprecedented three Visigraph machines in one place, as well as only the second known wooden Visigraph implement / tool box.  Below we can see the three Visigraph machines as they're prepared for comparison in detail. 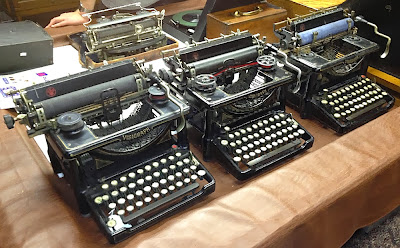 Below is a view taken from the other direction; the relation of machines remains the same. 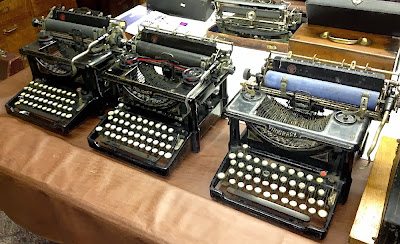 The most obvious external difference between the machines is that Richard Polt's machine is fitted with the optional decimal tabulator, although the key stems have long since been removed from the machine.  The rest of the mechanism remains in place, however and functions essentially as designed.  Other than this purely optional change, the machines displayed no outwardly visible changes in manufacture of any note whatsoever.

The surprise was to be found inside the machines.

As it turns out, my Visigraph -- which is in between the other two in serial number -- has a key lever / type bar mechanism which is very different from that of the other two.  My machine has the mechanism so clearly seen in all of our videos up until now; the other two use a link with a hook at each end to connect the primary key lever and the intermediate bell crank.  Perhaps more significantly, examination of all other available photographs of other known machines (three others available) shows that they all match the hooked link design.  This means that among the surviving Visigraph machines, my machine, serial 12970, is completely unique at the moment.  Examination of the other examples known to exist will have to be arranged.  (This blog post will help facilitate that process through use of photographs for comparison.)

The design employed in my machine is shown well in this video.  Note carefully in this video the point at which we're examining the type bar mounting from the Visigraph, removed and sitting on the work bench.  Note the forked, or slotted, extensions on the back of the bell cranks that are mounted on the back side of this assembly. 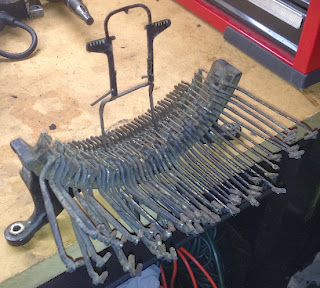 For completeness, above is a static view of the type bar mounting assembly from Visigraph s/n 12970 sitting on the workbench.  Note the 'feet,' through which are large holes for the mounting bolts. 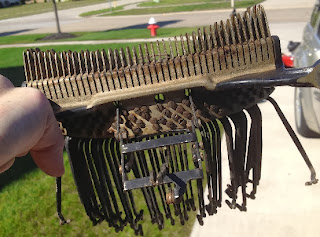 Above is the underside of the type bar mounting from Visigraph 12970, seen outdoors during cleaning.  (This was during one of the last warm weeks we had here; it's now far too cold for this!)  The slotted rear extensions of the bell cranks are sticking straight up in this photo. 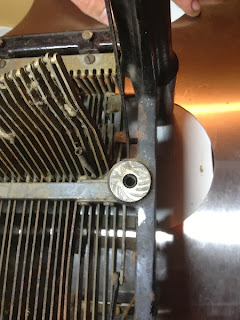 The view above is looking straight down at the largely disassembled Visigraph 12970.  The right side mounting location for the type bar assembly can easily be seen.  Sticking up from the machine are extensions that are screwed on to the primary key levers.  These engage the slots on the back of the bell cranks in the type bar mounting.  It is through this sliding connection that motion is transmitted from key lever / key lever extension to the actual type bar, through the bell crank and a further link.

The design employed in the other known machines is seen in detail in the photos below. 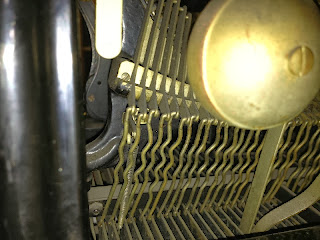 Above is a view looking into the rear of either Herman's or Richard's machines -- I did not record which one it is, but in this respect the machines are identical.  The connection between the key lever and the set of bell cranks in the type bar mounting is not made with an extension and a pin-and-slot connection to a slotted bell crank, but rather is made with a link, hooked on each end, connected to both the key lever and the bell crank through a simple drilled hole.

Without getting into incredible detail, this change is significant.  It's significant from a theoretical standpoint (since the design of 12970 includes true accelerated type bar action, which the others do not) and from an assembly standpoint (the type bar mounting will not anywhere near as easily come out of, or be put back into any of the machines other than 12970.)  What's even more interesting is the fact that it is clear that the company changed to the new design by the time 12970 was made, and then changed back to the other design by the time 13807 was made.

For whatever it is worth, it looks to me as if the key lever extensions on 12970 are just screwed into the same holes used for the links to hook to the key levers as seen on 10077 and 13807.  This would certainly be expedient.

Of course, many were exposed to the Visigraph for the first time at this meeting; few were aware that this machine incorporated a design that allows for a very quick carriage removal.  Below is Richard Polt's machine s/n 13807 with the carriage off. 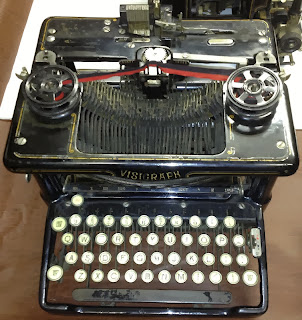 The housing for the stop levers in the decimal tabulator mechanism can be seen at the top of the photo, mounted at the very back of the typewriter.  On the front is a rotating bar that has marks which corresponded to the keys to operate the mechanism, with four varied scales on the rotating bar.


Peter Weil brought along his rare and interesting Visigraph accessory box, seen below, to make four very scarce related items that were in one place.

•  It is at this point that the tales of the Visigraph will go underground.  I've decided, after many years of having been prodded by other collectors, to finally write a book on typewriters.  This book will be titled "The Visigraph Story" and will detail not just this machine and its history, but also the competitive environment into which it was released.  Peter Weil, who is aware of the project, has given his full endorsement and offered help - and the other collectors who own Visigraphs have already begun to contribute photos and information.  The book will not be large -- Peter has labeled the concept as a "slim volume," which rightly it will be.  I hope to have it out sometime very late this year or early next.  This will be a great challenge with my schedule, but I have at least begun the project during the year marking the 100th anniversary since the appearance of the Visigraph on the market.

(Oh .. one more thing!  This post was originally going to have been made with a video.  However, I lost my voice due to laryngitis a week ago plus, and still do not have anything like my normal voice back.  Rather than produce an unintelligible video, and rather than continue to wait for my voice to recover, I've decided to post pretty much everything I'd have said or shown in the video here on the blog.  We have things for video piled up, and when I'm back to being able to talk fairly normally for longer than a short while, the videos will come right back.)

Finally, I'd like to thank Robert Messenger for the very kind review of the session in which these machines were compared during the Gathering held by Herman Price.  You can find the post he made here.