National Combination Typewriter: The National No. 5

Our long-ago page on the National / Portex, part of the Portable Typewriter Historical Spotlights page, and the (original) page on the National / Portex  (linked to the Harris - Rex - Demountable article, since they were made at the same plant) remain essentially accurate in whole and in detail, and are the only authoritative collections of information on the history and development of this line of typewriters.

One particular name variant of this line is however not represented in enough detail to express its importance; this is that labeling variant that concurs with the company having advertised the National as the "National Combination Typewriter," with the direct implication that the machine was both suitable for use by travelers (as was, say, the folding Corona 3) and for use by those who wished to keep it stationary in a home office.

In both of the National / Portex pages listed above, National No. 3 serial 12681 (part of the Tilman Elster collection at the time) carries the round decal known to have been used during this labeling and marketing period.  I've acquired a No. 5 machine with a slightly more elaborate decal. 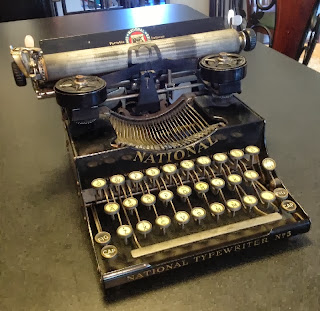 While this machine carries the designation "National Typewriter No. 5" on its front frame as one would expect, the paper table carries a more descriptive decal seen below.  Click any photo to enlarge. 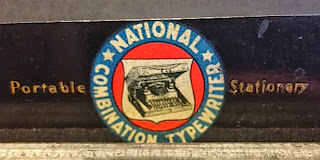 In the paper table decal we see the description that the machine can be considered either Portable or Stationary, and the description as the "National Combination Typewriter."  It's clear that the manufacturer, the National Typewriter Company, wanted prospective buyers to consider that this typewriter was substantial enough to take hard use.

Below is a May 1921 advertisement for this typewriter; the ad is in my collection. 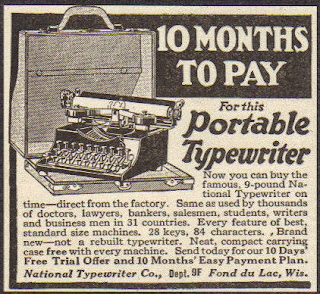 The machine has liberal terms, as did quite a number of mail order or "cut rate" machines of the period.  It's interesting to realize that the Rex Typewriter Company and (somehow always associated) National Typewriter Company were among the first to produce standard and portable typewriters in the same factory.  The persons in charge clearly realized the massive profit potential available in portable typewriters at the time, which could charge a semi-premium price for their portability and novelty -- which, considering the very small amount of material they included, assured a large profit margin.

Another advertisement (not shown) from the time stated that the National "Will do the work in any office..  is light enough to be carried anywhere, and heavy enough to 'stay put' when operated rapidly."  Historically we might well consider that this advertising effort heralds the kind of machine we would eventually see in the Alpina -- a portable heavier and more substantial than others of the day, intended to be applicable for small offices if required, but still portable.  Of course, the National's advantage over such machines of the day such as the folding Corona and Fox portables wasn't anywhere near as large as that of the Alpina over other 1960's portables, but the intent of the advertising clearly points in that direction.  Thus, the theoretical implications of the advertising are of interest to historians even if the National's impact in the industry was small.

Above, the front of the National No. 5 can be seen.  The decal says "Sold and guaranteed by National Typewriter Co. Fond du Lac, Wis."

The advertisement seen above states that a carrying case was free with each machine.  National No. 5 serial 16169's case is seen below.  It differs from some later National / Portex cases. 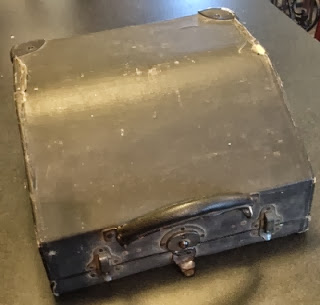 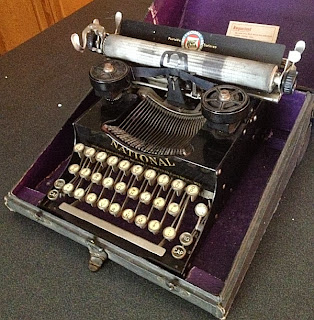 The inside of the case is purple -- just as it is with our Portex No. 5 from a later period.

Very soon after the machine we've been seeing was made, Rex Typewriter Co. took over National Typewriter Co.; National had been using space in Rex's factory, and perhaps it defaulted.  Whatever the case, Rex spent $50,000 to retool the portable machine's production and alter material specifications to reduce its weight to nine pounds even (from nine and a half.)  This was then announced as the Portex; the carrying case was made an option.  Initial announcements for the machine did not specify that the National brand name would be continued, but it most surely was as we know from surviving examples.  What changed in the case of the National-branded machines was that the "combination typewriter" ad approach and labeling was dropped. 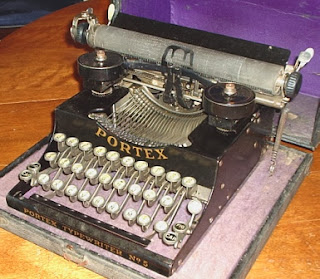 Above, Portex No. 5, Davis Bros. collection, serial number 19882.  This machine has the optional carrying case, with interesting purple lining. 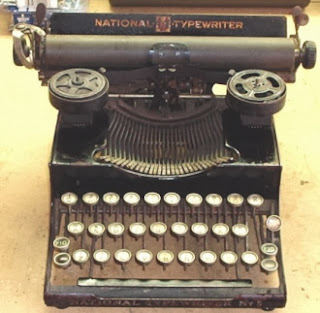 Above, National No. 5, Will Davis collection, serial number 22036.  Note that the "Eagle-N" emblem has appeared, the paper table boldly says "National Typewriter" and that there is no hint of the earlier approach to advertising.

The "National Combination Typewriter" advertising and labeling appeared during production of the National No. 3 machine, and as we've seen stretched right to the early 1922 takeover of the National concern by Rex.  (It's important to note here that the National Typewriter Co. had originally been the National Typewriter Dept. of the Rex Typewriter Company and was split off during sometime in 1918 or perhaps 1919.)  It's perhaps a minor variation in labeling, but we show it here in detail to add to the history of the line and to point out the interesting implications for the future history of portable typewriter marketing and manufacturing portended by the dual-nature approach.