The gathering held over the weekend at Herman Price's place was absolutely incomparable.  Collectors, authors, and general enthusiasts had several days' worth of interaction that proved once again that the core of our hobby is PEOPLE.

Herman and Connie Price did a fabulous job with the entire affair including food and drink.  I had the good fortune to see many friends who I have not seen in a year; I had extended conversations with my friends Peter Weil, Maddie Allen, Richard Polt and Alan Seaver.  I haven't seen Dennis Clark in a number of years, and we talked a number of times (and are now working on a little research project together.)  So many others were there -- long time collectors like Mike Campbell, Fritz Niemann, Paul Robert, Marty Rice.  And of course, all the way from Australia, Robert Messenger, who I was very thrilled to meet and talk with.

Robert Messenger has made a great post showing some of the machines and people.

So many people were there and there were so many conversations and presentations that I liked that I cannot mention everyone and everything; I can't even remember how many people I talked with right at the moment!  It was all great.  I do especially want to thank Mark Petersen, J.P. Huard and Katie Kirkland for great company at dinner the first night.

•We made a video before I went down to Herman's place.  This was an update on the Visigraph, and it also delves a bit into our philosophy of how new collectors and enthusiasts should initially approach the concept of repair.  Click here to see this video.

•I made a brief post-meeting video update showing some exciting new additions. Click here to see this new video.  (At press time, this video was still processing - 9 PM 10/14.)

Photos from the Meeting -- Here are a few photos I took at the meeting this last weekend.  All will enlarge when clicked. 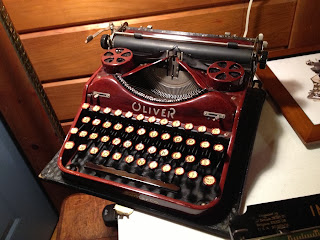 Above, Gabe Burbano's wonderful Oliver portable.  The more of these I see, the better I like them! 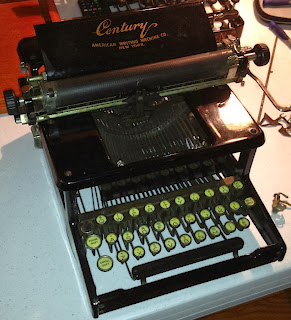 Above, Mike Campbell's Century.  This machine is just like the Remington Junior, but carries the branding normally associated with the Century 10.  However, this is clearly still the original configuration, right down to having the ribbon spools behind the carriage just like you'd find on the big Smith Premier No. 10.  Also notable is that this unit has a pharmaceutical keyboard. 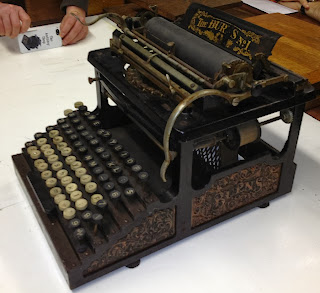 Herman Price's Burns No. 1 is seen above.  This is an incredibly rare machine that several collectors, including Giulio Fanutti, said was on the "top of the desirable list."  What a fantastic looking machine!  Peter Weil told me that it's believed today that this machine was never put into what we'd think of as "mass production" ...  all surviving examples have differences that suggest no large standardized factory production was achieved, even briefly.   Reminds one of the Smith Premier No. 1 in some ways, doesn't it? 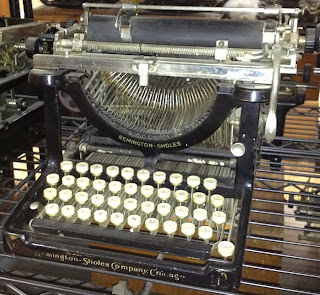 Above, Remington-Sholes Visible, Herman Price collection.  Another very scarce, relatively early (and briefly produced) "standard four bank front strike" typewriter like the Visigraph we've been showing on this site quite a bit lately.  When the enterprise failed, tooling for this machine went to France where it re-entered manufacture as the Japy.  (There's a Japy right next to this machine that you can't see in the photo, by the way.) 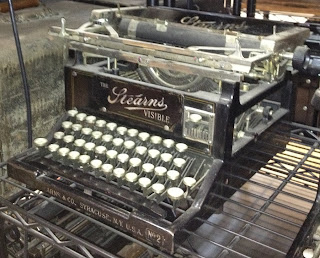 Stearns Visible No. 2, Herman Price collection.  Another relatively early visible standard, which is also a pretty scarce machine these days.

I can't tell you how much I'm looking forward to the next get-together, wherever and whenever it is!
Posted by Will Davis at 6:02 PM