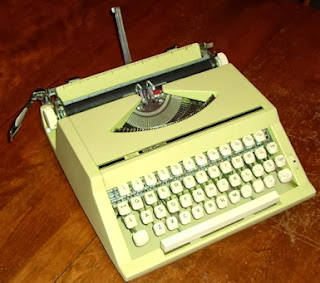 Up right now at our new YouTube Channel is a fun exercise that we would normally (in the past) have conducted using photos and text on either my site or this blog, and it involves this typewriter. The machine you see above has been shown on my various site pages (Portable Typewriter Reference Site, European Typewriter Project) for many years; it's the Sears Chevron, or perhaps better the Sears Model 5298.  This is a version of what was originally known as the ABC 2000, but this one was made in Portugal.

Well, a long while back I acquired an actual German-made ABC 2000 variant ... and then forgot about it.  The two were right next to each other, stored, when I noticed them last week and decided to do the comparison point-for-point.  We had the idea that it might be fun to just film it cold, and that's exactly what you will see on the video.  Click below to see the video; it'll open in a new window.

Let us know if you have a particular machine you'd like to see us review, or analyze, in one of our videos.  If we get a number of votes for a particular model (that we have available, that is) we can certainly give our impressions.  We already have a number of such "walk-around" videos in planning.