I recently purchased an advertisement that has triggered, along with a recent video (see our video on interchangeable type) a brief look at late manual, standard typewriters.

The general history of the Woodstock / R.C. Allen typewriter line carries the fact that, in 1950, R.C. Allen Business Machines (who had bought the business) changed the name on what had been the Woodstock typewriter, and carried right along manufacturing it in its original Woodstock, Illinois factory.

Back in mid-2006 I spotted (on e-Bay) and purchased a curiosity; a typewriter that carried BOTH brand names -- that is to say, it had both the R.C. Allen and the Woodstock names.  You can see the machine below. 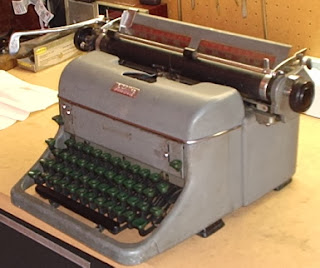 The machine you see above is covered in proper timeline sequence, as is usual for my web pages, at my R.C. Allen gallery.  Click here to see that gallery, mirrored on Alan Seaver's site.

This week, I was fortunate to spot and win the advertising folder (tri-fold, printed on one side only) that you see below. 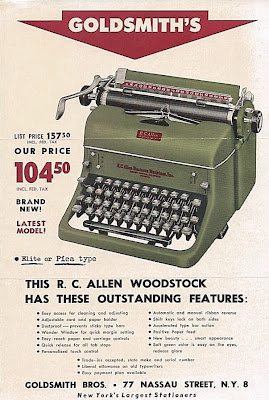 This ad both shows the typewriter labeled just as my example is, and also clearly advertises the machine as such -- namely, the "R.C. Allen Woodstock."  Finally, we have at least one piece of ephemera that shows a typewriter we all knew to exist, but for which there was no other evidence other than it, itself.  Unfortunately there's no date on this ad folder.  (Click photo to enlarge.)
As we can see from surviving machines, at least one R.C. Allen exists with a lower serial number than my R.C. Allen Woodstock... which seems to say that, at least initially, the Woodstock branding was dropped.  The company may well have thought better and decided a transition period resurrecting the Woodstock name was required.  (Smart... why ditch well over 30 years' worth of brand recognition?)
•RC ALLEN PRODUCTION UPDATE
The overall line had a LONG life... and we can tell you now from NOMDA serial number records that it went through 1971.  For comparison, the Woodstock was produced in various models from 1914 through 1950 (36 years) while the R.C. Allen ownership and production era lasted another 21 years, from 1950 through 1971.  Here are the serial numbers for the R.C. Allen Visomatic B, the last model produced (from NOMDA records.)
1965          2356M
1966          2370M
1967          2394M
1968          2415M
1969          2420M
1970          2445M
1971          2470M
•END OF US PRODUCTION, BUT NOT OF SALES
The end of production of this long-lived line is just one of a series of stoppages in a several year span that marked the end of the manual, standard typewriter being built in America.  In 1968, Underwood (actually, Olivetti-Underwood) stopped manufacturing typewriters here; Smith-Corona halted production of its manual standard typewriter in 1970.  As we see, R.C. Allen followed in 1971.  Royal shut down its Hartford, Connecticut plant in 1973 so that later Royal standard manuals were made overseas; it had already been importing some.  Remington had already quit manufacturing standard machines here but these continued to be made overseas and imported. 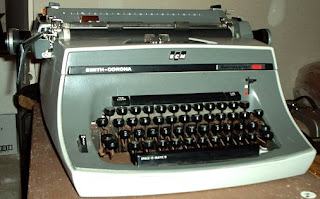 Above, Smith-Corona Secretarial 76, manufactured 1970.
This wasn't the end of the SALE of manual, standard machines in the United States by a long shot, though. Well established brands such as Olivetti, Olympia, and Facit had manual standards available here well into the 1980's.  International Typewriter Exchange eventually obtained licenses to import both the East German-made Optima standard machine, and the Polish-made Predom machine and sold very many to the US Government. (One of these Predom machines is on the header of this blog - on the left.)  Morse, an import firm, also later continued to import Remington brand machines even after the original company had ceased to exist, with the machines being produced in Italy, in the mid-1980's.