A Royal Safari at Eighteen Years on the Net

Folks, I put up my very first typewriter-related web page eighteen years ago this month.  The purpose of that early site - which started on AOL Hometown and then was supplemented by GeoCities - was to identify the myriad of portable typewriters found out in the wild which had no source for identification.  There were no sites, no lists; no databases. No books of use.  Nothing. No "serious" collectors had any interest in any modern portables at all. I was essentially alone, but after I got started and people in the collecting world became certain I was serious, a number jumped on board.  Eventually those original sites expanded to cover not just world-wide portables (many shown and identified there for the first time anywhere) on the Portable Typewriter Reference Site, but also early visible standards and hundreds of European machines of all sorts.  The original set of sites, with some Bravehost pages added, was well over 220 separate pages on various subsections at the peak.  Many collectors eventually helped out; many are still friends today.  Sadly, a number of critical people from those early days are no longer with us - but are well remembered.

Looking back on those early days when every portable interested me isn't too different from now - they still do.  Since it's been 18 years of this hobby and thus 18 years of friendships, co-authoring, contention, work, and fun all wrapped up I thought I might put up a few posts that hark back to the early days, showing some of the sorts of things that initially intrigued me.  Here's one such sort of thing - the relative zoo of Royal portables labeled "Safari."

A ROYAL SAFARI - of sorts 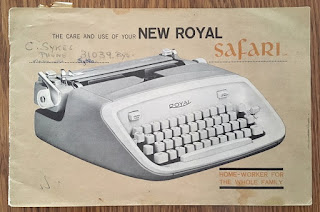 The Royal Safari was introduced about 1962 - at least, the version seen here which is likely to be that variant most frequently brought to mind when the model name is mentioned.  This variant was produced at Royal's still-new plant for manufacturing portable typewriters in Springfield, Missouri.  These machines (that is to say, this basic mechanical design no matter the small changes or model name) were well made and very widely sold, keeping Royal at the forefront of the field.

Royal itself, however, was not to continue for very long in its original form.  The company, which properly had been merged into the new Royal-McBee Corporation in 1954, was bought and merged by Litton Industries - a giant conglomerate corporation.  The merger took place on February 28, 1965, marking the beginning of what would become a huge office machine organization.

An interesting change took place almost immediately; the company began bringing Silver-Seiko manual portables into the US and selling them under its name.  The next year, 1966, Litton bought Imperial Typewriter Co. in England; in 1968 it bought Triumph-Adler (which already owned Grundig, who was producing the Tippa portable.)  The firm has also bought adding machine manufacturer Monroe in 1967.

Rationalization of production was not long in coming, and in 1969 Royal closed its Springfield portable typewriter plant.  Imperial's plant closed in 1974.

During this time the trend of selling imported typewriters was growing in every market, and typewriters were becoming more and more international than they'd ever been before.  The first "Safari" that Royal sold which wasn't really a Royal came from Portugal - where it had transferred the machinery to make the original "1962" Royal Safari. 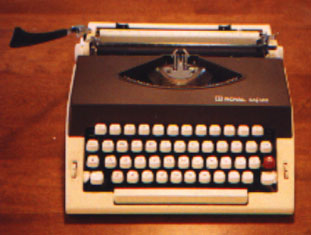 At left we see one of those Portuguese-made Royal Safari machines, in a nostalgic shot from my old website.  These machines were very heavily encased in plastic, with a fair amount of space between the body shell (mask, officially) and the machine itself.  What this machine actually was had no relation to the former-US made Royals, but in fact was the last development of the old West German ABC machine from the mid-1950's whose production had also been transferred to Portugal - specifically, to MESSA S.A.R.L.

The Royal Safari was a fairly close copy of the abc2000s which is seen below in a very recent shot.  This was also sold as the Imperial Safari; the Litton versions are all-plastic but the abc version has considerably more metal used in the body and lid.  Rarely, the Safari can be found in green. 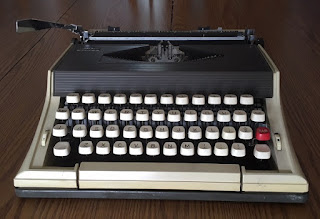 Following the years of Litton ownership (which ended in 1979 when Volkswagen bought TA-Royal) a few other machines were brought in and sold as the "Safari" - but with Roman numerals added.  These are seen and briefly discussed below. 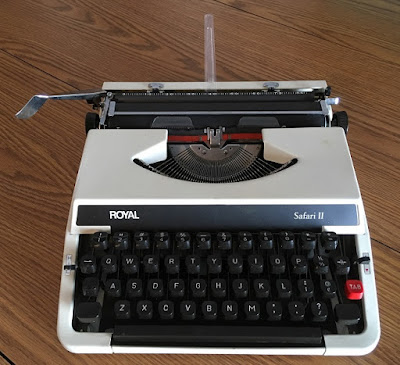 The typewriter above is a Royal Safari II.  This machine, it will be noted, does not bear the Litton Industries "Li" emblem anywhere and postdates that firm's involvement with Royal.  The Safari II was manufactured by Nakajima in Japan, and is a late model whose primary key lever mount is completely enshrouded, preventing fouling.  The rounded, downward curved margin set tabs are always a giveaway for a Nakajima (although there are some Nakajimas out there that don't use this design, mostly electrics.)  This carriage shifted machine is a pretty solid runner, and capable of decent speed. 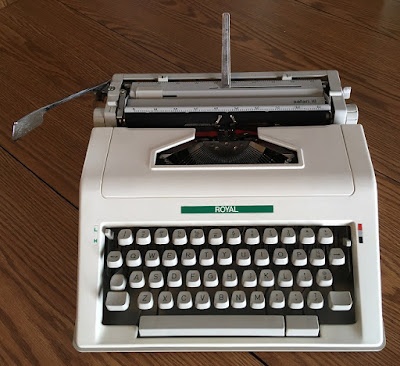 Above we see the Royal Safari III.  This machine was manufactured in South Korea by Dong Ah Precision, the second of two Korean typewriter manufacturers (the other being K-Mek, which made the Clover.)  Interestingly both Korean makers were building clones of Silver-Seiko machines; the Clover was a copy of the very common small Silver-Seiko, while this Safari III was a version of the much larger and different Silver-Seiko machine that is also much less commonly seen.  So far as this writer is concerned this is a very good to excellent typewriter; the response is smooth and solid, and the machine could be used comfortably by people with a wide range of typing competence and style. 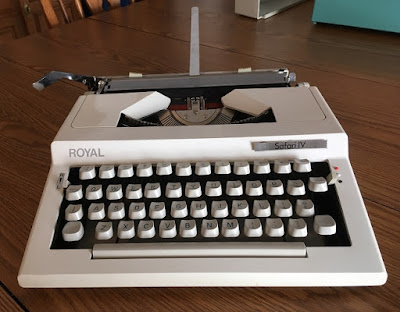 This slightly improbable machine, the Royal Safari IV, is by far the hardest to find of the bunch and, frankly, the worst.  This is another version of the small Silver-Seiko machine, but this time manufactured in Bulgaria by Typewriters Works Plovdiv.  This machine is analogous to the Maritsa 30 (original name) and the Omega 30 (the name commonly used for export to the US.)  The Safari IV and an Omega 30 are seen below.  All examples of the 30-series Bulgarian machine suffer from poor gluing of the label plates, and these have often been found to be missing on these machines.  As an aside, the same machine can be found with a TA-Royal label. 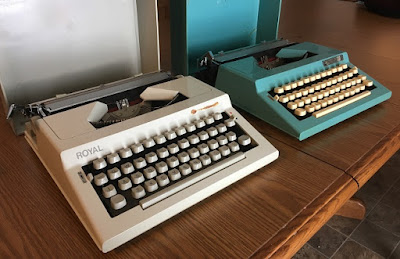 In 1986, Olivetti bought TA-Royal, ending any further potential variations like those above and seeing the Royal name instead applied to other designs.

What you're seeing me calmly go through above, rattling off models and makers took years to develop, research and prove.  The internet wasn't what it is now in those days, and there was precious little help.  (Those who DID help know who they are!)  Advertisements, trademarks, patents and, most importantly, international collectors who could provide pieces to the many puzzles were all necessary to properly write the history of so many varied brands.  And we're still discovering things, still finding new information and updating old - it likely will never end.  And that, my friends, gives me hope for another 18 years or more in this wonderful hobby!