When looking back at having had typewriter-related pages on the internet for 18 years this month I'm reminded of the early days of going out to second hand shops, antique stores and antique malls, consignment shops, garage sales and flea markets looking for typewriters.  One brand that we had in bunches here in Ohio that seems harder to find elsewhere is the Czech-made Consul.  These sold quite well here; perhaps it's not as big a mystery why as one might think, considering the very wide Czech-origin immigrant background we have here.  (They've provided us not just with great typewriters to collect, but great food as well!) 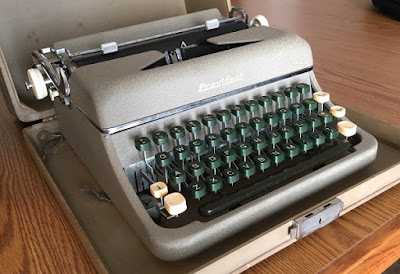 First off we see a machine labeled President - a name surely applied to give the machine better appeal here in the states - and which is dated to 1958 by the case label sometimes but not always found stuck either in the center of the lid or centered on the base under the typewriter.  This early series of Consul portables was a straight development from the Zeta portable, which probably explains the ZP prefix that the serial numbers of such machines have.  This example is serial ZP-111888.

These segment-shifted machines were pretty well made, but these early ones just are not as tight and refined as major makes their size from their day.  Still, they're good machines and it's pretty clear that just like Japan would do with automobiles the Czech firm of Zbrojovka Brno, who made the Consul machines, was taking feedback and improving design and assembly all the time. 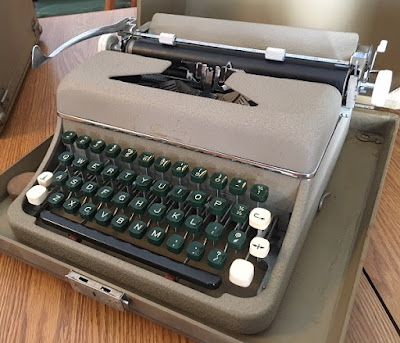 The machine above is of the same lineage, but is missing its front label.  It's a safe bet that the machine at one time said "Consul" on the front as we'll see on others later but there's also the chance it had some American-sounding name for sale here.  This example is serial ZP-121555, is dated to 1959 by its case label and actually came with tools and its instruction book. The machine also had its rubber carriage knob caps that serve as the carriage immobilization - one can be seen on the left of the machine in the case base.  Interestingly, neither the cover illustration nor the interior diagram in this machine's manual matches this typewriter.  We'll briefly see those below. 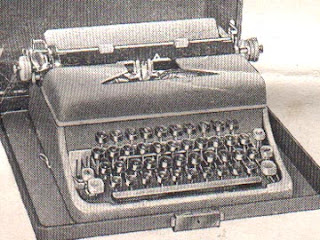 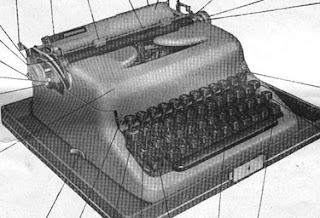 Here we see two illustrations found on the instruction book for ZP-121555 from 1959.  The upper illustration is close to the machine but has two fewer character keys, while the interior diagram illustration is the more deluxe model with rounded lines.  Clearly, the product lineup was in a state of change and development.

What's known officially as the Consul 1511 comes next in our stroll through the Consuls. 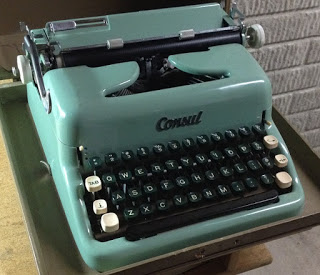 Consul 1511 serial ZP-157225 is seen here; this machine has a case label dating it to 1959.  This design has a lever-set tabulator and automatic margin setting like many Royals and others.  Compared to the previous machines, these are deluxe models and are good running machines. 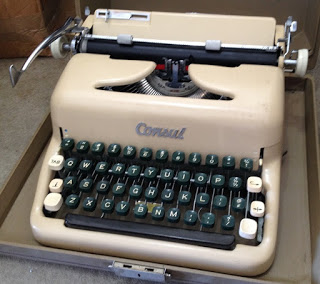 Consul 1511 serial ZP-164862 (label date also 1959) is not different from the previous machine. Note that the "Consul" name label on both of these deluxe models is chromed. 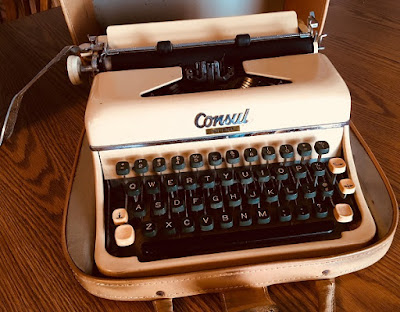 This machine is a Consul Silent, with serial number ZP-185678.  There's no case label, but this machine might be from 1960.  There's nothing special or different about this machine to make it any quieter than any other; the model name is thus probably simple marketing.  What is unusual is that this is the only machine I've got in the old, square body style that has smooth enamel paint on it, which is a sort of strange beige.  The others are all crinkled.

These models above were all found locally; the local supply also yielded a much later Consul portable, seen below. 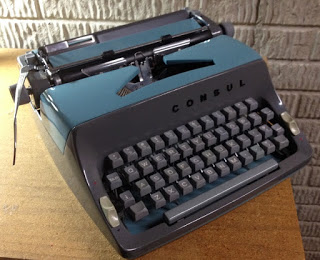 The Consul 221.1 seen here is an excellent typewriter, and any real typist encountering one of these in any kind of good shape should buy it.  These are solid, well made and pretty fast.  This machine is serial number 0 221 115301.

The portables seen above - sometimes thought of or referred to as "upright" or "desk model" portables - were not the only portables ZB manufactured.  The company also introduced an extremely widely sold and successful line of flat portables, some of which we'll see below. 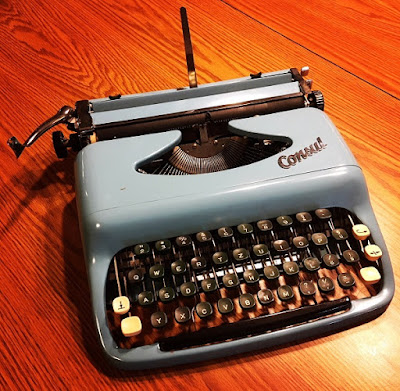 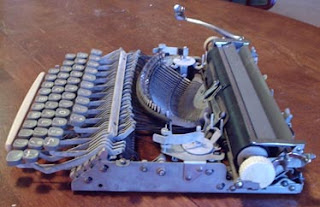 A similar machine stripped of its mask components reveals the simplicity of the flat Consul machines.  Key levers are mounted on four dowels that themselves are held in a 'dowel plate' at the front of the machine, and act simply as cranks pulling the intermediate link (a wire) and then the type bar itself.  Simple stampings make up the frame.  This basic construction feature was shifted over to more and more by manufacturers around the world in an attempt to get manufacturing costs down. All Silver-Seiko flat machines, all Nakajima manual machines, the Olivetti Lettera 32 and all derivatives thereof use a form of this design of key lever mounting - as do a number of others. 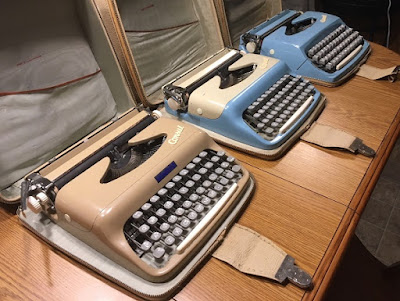 A variety of machines was developed from the flat 1531 including those seen here, which we'll briefly take a look at individually.

The Consul 1531 was directly replaced, it appears, by the 232, but the 233 was added later.  This machine, as we can see, had a different body, two more keys, a lever set tabulator and different keytops.  However, the mechanical concept of the machine was essentially the same. 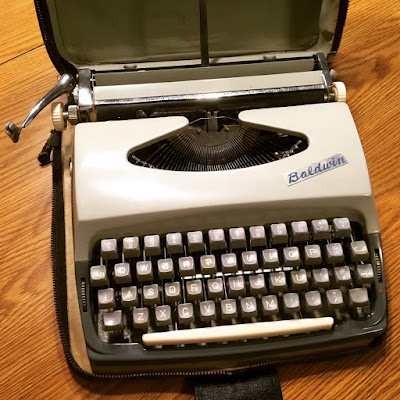 Above we see a relabeled Consul 233.  This machine carries the name "Baldwin," and is serial number 6 233 040454.  It's suspected but not confirmed that this machine was sold by Bundy Typewriter in Philadelphia, who was known to sell and service both the Czech Consul line and the Bulgarian-made Maritsa line.

Concerning the flat machines and identification - it seems that the single digit out in front of the serial is a year reference; the next three digits are the model number, followed then by a serial.  This holds true for other subvariants of the flat line, not shown here. 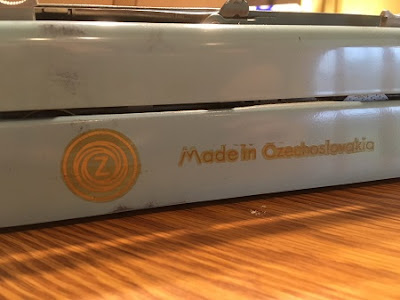 On the rear of the Consul 233 we can see the distinctive Zbrojovka Brno emblem - a capital Z in the center of a rifled gun barrel.  This is because the firm was originally an arms manufacturer; it got involved with making Remington machines before the Second World War under license.  However, the segment shifted big portables and flat portables seen on this page were developed independent of Remington and are unlike any of that company's designs.  In fact, it seems likely that the Czech large portable was the first segment-shifted big portable to be sold in numbers that was made in Europe.

Zbrojovka Brno sold the rights and tooling for typewriters to a company known as RVHP in 1977 at the time when nationalized industry was privatized; that company lasted making Consul machines until about 1988.  My records show that a new firm, REMAGG, relaunched Consul production in 1992 but, as might be expected, that company quit typewriters (and office equipment) in 1998.

So much for our little walk down Consul memory lane.  You used to be able to find lots of these here in Ohio - I passed on quite a number back in the old days.  I could have had double or more of these, but I left them for the next person.  Who knows where they all went ... but for sure, there are many more out there, somewhere, waiting to appear from attics, basements and barns.  Even today!