One of the things I've focused on in my years of writing about typewriters is the area of rebuilt typewriters.  I've got a large section on my site covering these; if you haven't seen it, please take a look because it's a good primer.

Rebuilt typewriters by Will Davis 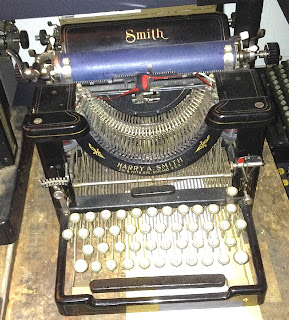 Above, Harry A. Smith No. 4.  This machine is actually a rebuilt Victor No. 2 which Smith's company has sold by mail order; click here to see this typewriter unearthed.

Another thing I've focused on is the area of what we might call "low cost" standard typewriters.  By this, I mean machines that are intended to be functionally competitive with the "$100" standard machines in many, most, or all respects but which cost (for one reason or another) far less than that price brand new.  Some great examples of this class which had notable success over a period of years would be the Harris Visible line (see my article here) and the Daugherty-Pittsburg-Reliance line (see my article here) both of which sold for well under the price being charged for new standard machines at the time by Remington, Underwood, L.C. Smith & Bros. and Royal.

What happens when these two forces meet?  We know that both types were frequently close enough in price to compete directly with each other -- by this, I mean typewriters rebuilt in volume, and typewriters of the "cut rate" brand new variety.  In fact, for a number of years (even including price increases) the Harris Visible / Rex Visible line whether sold through Sears, Roebuck & Co. or through agents was right at the price level of rebuilt machines being quite widely advertised by such rebuilders as Harry A. Smith and others.

An interesting perspective on this comparison -- which for the thrifty was probably a major decision -- can be found in the back of an original advertising book for the Harris Visible which was distributed by Sears, Roebuck & Co.  Here's this book's full page dissertation:

A FEW WORDS ABOUT SECOND HAND AND "REBUILT" TYPEWRITERS

Before it was possible to secure an efficient new typewriter at reasonable price, it may have been economy to purchase a second hand or "rebuilt" machine.

But now that the Harris Visible Typewriter is offered at $44.50, we do not believe you will care to purchase any used machine.

Really good typewriters are rarely traded in.  In nearly every case when a typewriter is traded in, its greatest usefulness has been pounded out.  If it were still efficient, it would not be traded; or if traded and really rebuilt, would command almost the price of a new machine.

Regarding "rebuilt" typewriters - the name is misleading.  Very few are actually rebuilt and these sell for $50.00 to $75.00.  The others, which sell for $30.00 to $50.00 are old machines, which have been cleaned, polished and "tuned up a bit."  Very few, if any, of the worn parts are replaced with new parts, and even such replacements do not add strength to the parts that remain and which are all more or less worn.

When considering the purchase of any second hand or "rebuilt" machine, remember that you can secure a brand new Harris Visible Typewriter for $44.50.

If you are offered a used machine for even as low as $25.00, remember you can secure a new Harris of the latest type with up to date improvements for only $20.00 more.  And remember that the Harris is guaranteed and backed by Sears, Roebuck and Co., one of the largest merchandising institutions in the world.  You take no risk; you are guaranteed perfect satisfaction.

Surely, a feeling of confidence in the firm you buy from is worth considering.

Do not buy any second hand machine unless you know its entire history and are satisfied that it has not been unduly worn or abused.  It is possible to make temporary repairs in a worn out typewriter which will cause it to do fairly good work for a short time, but it will not last.

Our price, $44.50, is a revelation in the typewriter industry.  The Harris is good enough for our use and good enough for anybody.  We venture to say there isn't $5.00 difference in manufacturing cost between the Harris and any of the most expensive typewriters made.  Yet there is a difference of about $50.00 in the price the purchaser is asked to pay.

Where does this difference come in?  What causes it?  You should answer this question before buying.

The difference, of course, implied in the price between the Harris and other standard makes was due to the fact that the Harris was at that time exclusively distributed through Sears, Roebuck & Co. and as a result there was no need to support a vast network of dedicated typewriter salesmen and repairmen, in addition to big-city stores and travel expenses.  Later, Rex Typewriter would claim essentially the same advantages except for the fact that the machine was distributed exclusively through individual agents.

It's clear that there would have been a lot of thought given by a prospective buyer in those days over whether a rebuild or a new cut-rate machine was a better buy if the $100 machine was out of the question.  Often, these cut-rate machines had very few options; for example, the Harris never had more than one carriage width, and never had a decimal tabulator.  On the other hand, the cut-rate machines were brand new as is so clearly pointed out in the Sears advertising book.  It might be more appropriate for us, as historians, to think of the cut rate new typewriters not necessarily as being direct competitors to all of the other $100 makes on the market, but rather as competitors for those machines AND those same machines when either sold second hand or rebuilt.