Richard Polt has sent us a photo of his exceedingly early Monarch Visible No. 2, which I reproduce below. 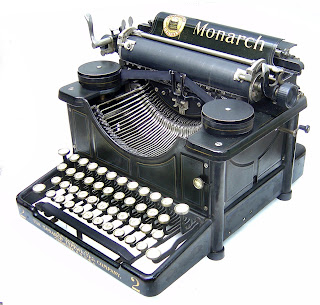 Richard's Monarch Visible No. 2 is serial number 437, and replaces Jim Dax's machine in my known inventory of Monarch machines as the earliest yet found.  The decals on Richard's machine match those shown in the previous article on Peter Weil's advertisement.  This leaves some question as to the decor on Jim Dax's machine with serial in the 1500 range, but look at the following illustration from Peter Weil: 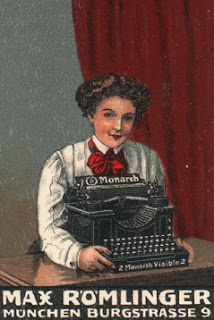 This is a 1907 poster stamp image sent to us for use on the original site.  Note that the front frame has only the large "Monarch Visible" lettering like on Jim's machine, while the paper table is like that on Richard's.  Clearly, Monarch was changing the decoration around during this time period.

As collectors, then, we might expect to find more, or less, elaborate decoration on either the paper table (with emblem, "Monarch" offset or without emblem, "Monarch" centered) or on the front frame (decal with smaller name and place of location, or just with large name.)  Normally, identification of very early variants of any given typewriter by labeling is fairly easy - but as we can see, on the Monarch it is more complicated.  The simple advice to collectors here is to make sure to get the serial number of a machine in any sort of consideration.  (We also must note the chance that any given machine we find was repainted.)

I did a typing test on my Monarch No. 2 a long time back.  I found the machine on a particularly good hunting day in operable condition.  I cleaned it up, and then, being curious about it, had it professionally cleaned and adjusted -- so far as is possible with an individual type bar bearing machine -- at our favorite local typewriter repair center, "Your Typewriter & Computer."  Below I reproduce the results of that testing as they originally appeared on my site, but with additions made in comparison with later slotted-segment variants.  I've also clarified some of my points to make sure the impression is accurate to the readers. 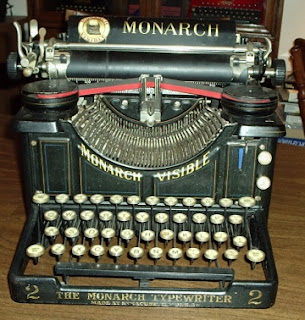 "I tried very hard to like this typewriter.  I attempted numerous styles of touch, from light to extremely hard and staccato, and adjusted my seating position numerous times as well.  No matter what I did, I could not arrive at any set of conditions that rendered the machine pleasant to use.

The machine has been returned to as near as possible to factory specifications by Your Typewriter & Computer, a local operation whose owner and technician have a combined 60 years of experience.  That the machine is functioning as originally intended is, to all of us involved (myself, Craig and Dan at YT&C) indeed without doubt so far as adjustment is capable; that does not remove its number of sub-standard qualities.

This machine has a key touch that must be experienced to be understood.  The machine's sound is tinny, but that is only the sound; the touch is overly stiff, with inhibition of key travel for one hundred percent of the motion at a high degree; in addition, the key level throw is rather short.  Given this fact, type bar return (to rest) ought to be rapid - and it is.  The failure on the part of this machine's design tends to result in the typist overspeeding the machine, resulting in a considerable number of jams if the rhythm is not perfectly continuous and touch not completely even.  Of course, it should be pointed out that this machine has no type guide at the print point, leading to increased full jams and uneven print.  Only a professional typist with completely even, refined touch and rhythm and who had practiced on this model exclusively for some time could produce acceptable copy with it.

The design of the type bar, the type bar bearings, and the mountings for the type slugs makes perfect alignment of the type problematical; age has only increased the effect due to wear.  It's true that the Monarch was one of the first typewriters on the market which was visible and which employed segment shift, but given the propensity for troubles with the overall design and its likelihood to get out of alignment through use -- early -- one wonders what the design engineers responsible for the Monarch were testing during the roughly four year run-up to production.

Other features were noted as we conducted this typing test (myself and my late father) but the most annoying was the wholly clumsy arrangement of the paper fingers and their slide rod.  We have not seen any notably worse designs than this (of the paper handling) on any machine of that time period, in the same price bracket.

Later machines with slotted segments and type guides (print alignment fork to some) are an order of magnitude better in producing acceptable looking copy for a range of typists' skills.  In addition, their feel is somewhat improved so that the later units with slotted segment would be vastly preferable to the early, individual type bar bearing machines.

Having said all of this, it does seem certain that when this machine was brand new and the type bar bearings tight, it would have done all that was asked of it.  The Monarch is sturdily constructed, is well assembled and has a number of features that were directly competitive with all other major makes of the day.  Certain too is the fact that just about any major make of typewriter in the same bracket (and many below) had a better feel.  My late father agreed with all of these assessments, and together our overall grade for the Monarch Visible No. 2 on typing test is only FAIR."

The above review does of course take into some account the age of this machine, wear on the bearings, and general wear of the rest of the machine.

This exact circumstance -- the fact that this machine types out of alignment with anything but the steadiest touch -- brings to mind a conversation I had with the late George Baker, who helped run, and then took over, an office machine business that he and his father began in 1932.

George told me that his father taught him everything you needed to know about how to sell typewriters, and that the typewriters themselves could often be the best sales tools.  In the case of the Bakers, a dedicated local effort in repairing machines from the back porch of their home led to a good local business being built up.  That ripened shortly into the Bakers acquiring a Royal Typewriter Company dealership, which was quite difficult to do at the worst of the Great Depression.

Royal had just introduced its newest model, which was its well known No. 10 machine mostly throughout but converted to use segment shift (and thus with the carriage rigid.)  Baker told me that he watched how his father approached each sale, focusing sometimes on the people involved and sometimes on the typewriters involved, until he had learned what his father was really doing.

He told me that if you went into an office where L.C. Smith machines were being used that had individual type bar bearings that got sloppy with age, his father would ask one of the typists to borrow her machine and then would proceed to type a few sample lines at high speed, but with deliberately uneven rhythm and touch so that the typing would be abominable.  The same sheet would then be put into the new Royal they'd brought along, and of course the typing would be perfectly even.  This was not to say that this was what the typists were putting out on the L.C. Smith machines; they were mostly professionals and could get good copy out of bad machines with technique.  But the boss seeing prospective correspondence going out looking like this would help seal the deal.

If on the other hand one went into an office wherein something like the old front strike Remington 10 or 12 machines were in use, or even Underwoods, the best bet was to let the typists try out the Royal.  Now, the sales tactic (again, with the boss present) was entirely different; the easy shift of the Royal would quickly be noted by the typist and applauded.  The elder Mr. Baker would ask how much more important that easier shift might be late on a Friday afternoon when there was still work to be done than it was at the particular moment, and of course the answers were usually affirmative to Mr. Baker's intent.  In these situations, the typists actually sold the machines to their bosses, if you think about it.

I loved these stories, because it was the perfect union of that moment wherein you had a superior mechanical product, dedicated and knowledgeable salesmen, a very narrow market (given the economic times) and brilliant sales tactics.  It was that combination that launched the Bakers' business.

We can easily imagine, bringing us back to the Monarch and my typing test, that had either of the Bakers spotted the Monarch in action in an office, they'd have noticed that they were separate bearings like the old L.C. Smith machines, and known just what to do to secure a sale.

Remington, and later Remington-Rand and even Sperry-Rand Remington, kept using the Monarch name long after the Monarch Typewriter Company was dissolved into Remington - in fact, into the early 1970's.  But not one single one of those products has anything to do with any Monarch branch of Remington -- these are simply "house brand" name units. 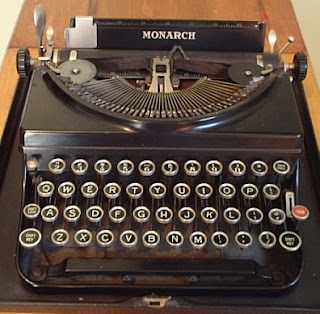 The typewriter above, in my collection, is what normally would be found as a Remington 5T portable.. but in this case, the machine carries the name "Monarch."  There was, when this machine was built, no Monarch Typewriter Company - Remington was using the name of a formerly fairly popular and widely sold brand, now folded into its operation, for brand recognition.