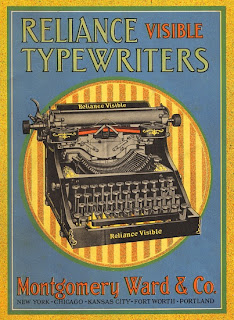 In 1916, a Mr. Enos Lesh sent away for the Reliance Visible brochure you see above.  I think we've all seen the early ads that said "send for our color brochure" or "write for particulars."  This kind of detailed sales brochure, heavy on why you should buy, was the result.

In this case, we can also assert that there was something else; a letter from Montgomery Ward & Co. to Mr. Lesh.  This letter isn't a mass-produced or mass printed affair; it's typed.  Although I mentioned it on my website article on the Reliance, I did not show the letter.  I've decided to do our first ever "typecast" on this blog by reproducing the actual letter Mr. Lesh received.  Two scans below. 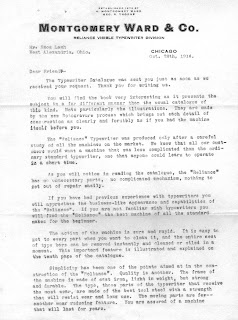 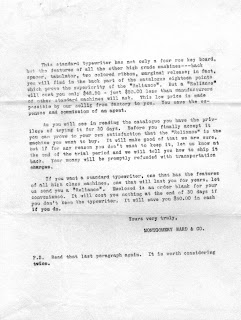 The Reliance Visible (formerly the Pittsburg Visible) was one of the "cut rate" machines being offered in those days - the idea in this case being that most of the value you paid was in the typewriter and not in a separate sales, distribution and service organization.  (Our favorite Harris Visible / Rex Visible family is in exactly the same bracket.)  Below is the centerspread of the brochure, also not before reproduced. 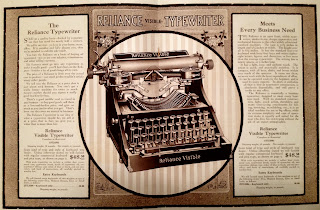 There is a note inside the brochure, written in, that hints at Enos Lesh having purchased a Reliance Visible; this brochure certainly is among the best of the early such examples and it would be easy to see why anyone thinking about getting a typewriter would be fully convinced to act having read all the material contained therein.  The brochure would surely have been expensive to produce, but there may well have been the supporting assumption that those who sent away for one were more than likely to purchase a typewriter anyway.

For full details on the Reliance Visible and more images from the brochure, click here to see my large article on these interesting machines.