Our recent examination of a pre-Second World War Adler standard typewriter caused me to examine a family relation of sorts while moving a number of machines around today.

The machine is a Dejur Triumph Standard; while quite a number of portables are seen carrying this dual branding, standard machines seem to be a lot more difficult to find with it. 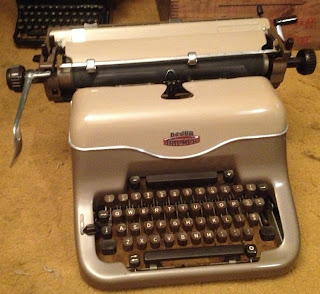 The Dejur Triumph we see here is a large, fairly heavy 45 key / 90 character machine with segment shift and key-set tabulator.  The serial number of the machine is found both on the inside of the machine, on the lower left side on an attached plate and is also found on the front of the carriage rail. 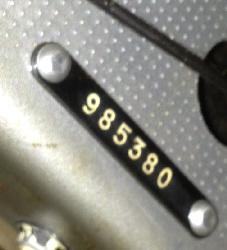 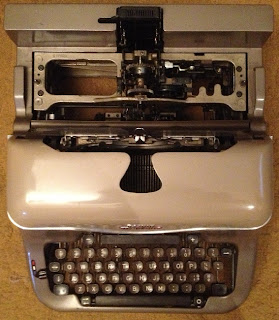 The ribbon cover flips up in the conventional fashion as seen below. 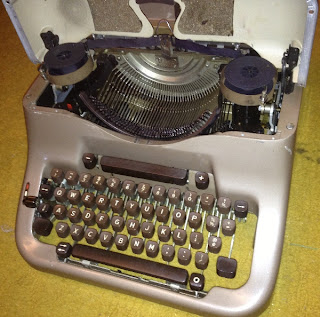 The two unusual keys either side of the space bar combine with wires and a multi-point socket on the left side of the typewriter to allow the typist to remotely operate a Grundig manufactured "Stenorette" dictating machine. (For those unfamiliar, the typist could insert a dictated tape into the Stenorette machine, and then control the machine from the typewriter keyboard in order to listen to the dictation and type it directly rather than interposing a step of hand-writing the dictation.)  Dejur Amsco Corporation was distributing these dictating machines in the United States, and within a few years of the date of manufacture of this typewriter it would have the rights to the trademark of the name "Stenorette."  Of course, at this time, Grundig (a German firm) was shortly to take control of Triumph itself.

This machine is extremely pleasant to use.  The action is smooth, crisp and quick.  The shift is positive and bounce free, but easy.  Carriage removal and reinsertion could not be simpler.  The machine's fit and finish are excellent.  A useful added feature that various makers of typewriters have added, then removed from time to time is the paper winding lever seen on the right end of the carriage on this Triumph that makes paper insertion a snap.  The keytops are of that modern, conformal plastic style which just feels very natural.  One is certainly given the impression that this would be a highly welcomed tool in the office when compared with a very large number of other makes and models from years previous.  The Adler and Triumph machines of this date range are probably not given their due as fine, top-grade working typewriters but this writer highly recommends them for any and every job.