The typewriter you see below is the only machine in my collection (or my family's, for that matter) which is assured to have been owned by a famous person.  I won it in open auction very early in my collecting career, and the background with the machine all checked out - the seller was fairly specific in the auction information about how he had come by the typewriter.  I checked out the address visible on the machine and it matched with archived information.  The machine was not very expensive because the date for bidding on any portable typewriter was early; they weren't really popular among collectors yet. 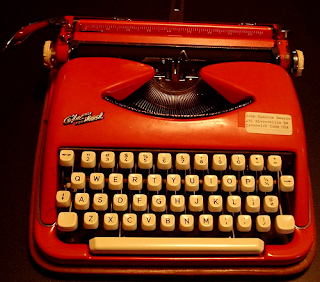 This is a Cole-Steel typewriter, and it was owned by John Cameron Swayze.  The machine had in its case an instruction manual, whose information was unknown to me prior to the auction but which checks out with a very early print date (1957) and was printed "Cole Steel Equipment Company" --- in other words, it was printed before the firm set up a separate business to market office machines instead of just office furniture.

Of course, what no one knew until after the auction was that I had an actual magazine advertisement in my collection that backed up the machine's existence.  I had won the ad on Yahoo! Auctions (now long gone!)  Below is the top two thirds of the ad; the rest just lists dealers.  Click photos to enlarge. 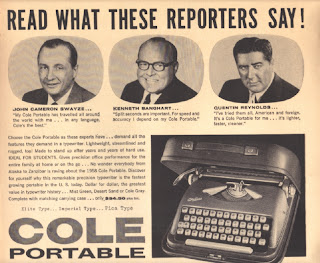 Although we know that the machine initially called the "Cole Portable" in these ads, later known better by its full name "Cole-Steel" appeared here in the United States in 1958 (being a relabeled West German "ABC" specially made for Cole-Steel) we don't know for certain when sales ended.  The numbers surviving seem to indicate several years' of imports from West Germany.

Now, let's fast forward to the late 1960's, when Cole-Steel Equipment Company becomes involved with Litton Industries, who already owned Royal (Royal-McBee by then).  This relationship eventually evolved into a merger of Cole-Steel into Litton in July 1970, according to trademark assignment records.  During this Litton era, the "Cole" brand name appeared again on a different generation of typewriters.

The most often seen late, Litton era "Cole" machines are the large Royal portables like the 890 / Custom III / Sabre.  Much harder to find is the model you're about to see. 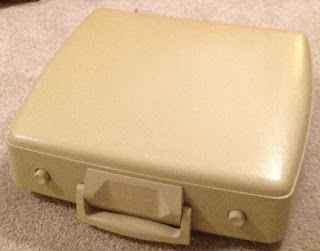 The case looks normal enough at a glance that one might pass it up if he or she were not inclined to like smaller, more compact machines.  But take a closer look at the handle. 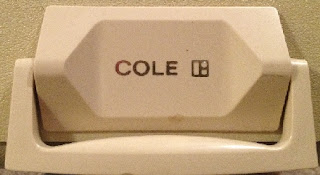 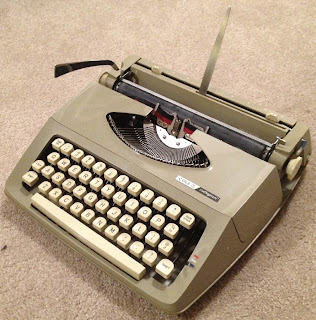 Here it is; the Cole Collegian.  A fairly compact 42 key rocking carriage-shifted portable, labeled "Made in Holland."

Here we see the label on the top of the machine in detail; we also see an extreme close-up of the serial number, found under the left end of the carriage, stamped on top of the bottom frame rail.

The serial number "6740083" does not make any sense unless we relate it to contemporary Royal machines, because that's what this Cole Collegian is - it's a rebadged Royal.  In fact, we have the correlating model. 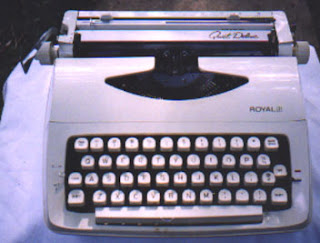 Above, a fuzzy but nevertheless useful old photo from my first typewriter site, showing a Holland made Royal Quiet Deluxe.  The serial of this machine is SL 7426286.  It is extremely similar to the Cole Collegian; it has a lever-set tabulator added as compared to the Cole Collegian, but is otherwise practically identical.

A look at the Collegian's serial number reveals that it fits in the known range for the Royalite / Royaluxe family, corresponding to 1966... IF the serial is running in with the contemporary Royal machines, that is.

(This series is that which derived originally from the Halberg Traveler; it then went through a run as a very flat Royal [sometimes also relabeled for, and sold by, Singer Sewing Machine Company in the United States as the Singer Scholastic] with model names like "Royalite."  The machine was given a new angular body more appropriate for the 1960's as the Royal Arrow, and Royal Parade.  The body style you see here is the third and last body style this machine had under Royal production before being dropped.)

Perhaps most interesting is the fact that the Cole name, quite familiar these days to collectors due to the skyrocketing popularity of the Cole-Steel (and the ABC too, I might add) did make a reappearance on typewriters after the original venture to import West German-made machines ended.  This little known enterprise had no real impact on the office machine industry and judging by surviving machines minimal sales; it's of interest to us today in context only.

It's also a good example to illustrate the collectors' tenet that you should fully examine every typewriter you ever find.