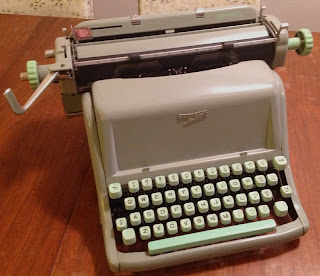 The machine we review today is a Hermes 8, a standard manual typewriter introduced by Paillard in 1954.  The particular example before us today is serial number 8125641, manufactured in 1965, according to NOMDA serial number records here.

The Hermes 8 is a 44 key / 88 character machine incorporating segment shift.  The machine is equipped with a tabulator, whose stops are set and cleared by use of a single lever on the right rear of the carriage.

The most instantly notable feature of the machine is the recess on the front cover to hold a stenographer's notebook.  Tabs at the bottom ensure the notebook will not slip down.  This feature, first introduced on the Hermes Ambassador model in 1948, eases the typist's work a bit since his or her eyes are always directly forward.  Incorporation of this design element gives the machine a very tallish look and an unusual profile. 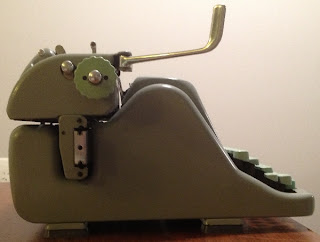 Another peculiar feature of the design can be seen in the profile photo; the Hermes 8 introduced a vertical carriage rail assembly.  The silver-ended carriage support can be seen in the photo, with the carriage mounting wrapping around it from the rear.  Ball bearings are used on this mounting and we think that this machine may have the smoothest-running carriage of any we've ever tested.

Other than these peculiarities, the machine is actually quite conventionally fitted out with line space selector (including half spaces, as many European machines do), flip up paper support arms, a paper release that also, when operated, lifts the paper bail (a feature we like,) and a well designed and shaped carriage return lever.  Margin stop setting is "automatic," with the location of each stop indicated by a pointer visible through slots in the paper table. 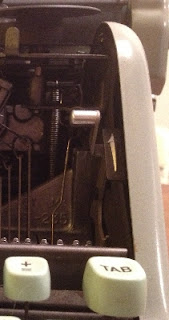 The touch regulator is located under the ribbon cover, on the right hand side and does have a marked effect.  That said, the action on this machine might by some be considered excessively stiff; this machine is surely one of the stiffer standard machines we've encountered.  While the action is not so hard as to be unusable by any means, it does require strong and/or experienced fingers to both develop the machine's full speed potential while not shadowing, or skipping with the machine.  It is of interest to note that Wilfred Beeching, in his book "Century of the Typewriter," wrote that the follow-on Hermes 9 was "specially developed to give a light and rapid touch."  The Hermes 9 was introduced in 1964; by 1966 the Hermes 8 was out of production.

The machine includes other features, both peculiar and desirable.  A peculiar feature is the manner of the ribbon selector; it is a knob, or perhaps spindle, protruding from the right side of the machine which correlates to dots printed on the carriage rail extension.  A desirable feature is the inclusion of jam clear function in the margin release key. 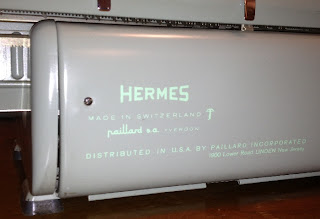 The Hermes 8 gives the impression of being a real workhorse.  It seems extremely solidly made, and in fact has a key lever / type bar system that positively ensures that any misalignment in a key lever cannot be transmitted to the type bars, by use of a novel dual-segment design.  The action is quite stiff but the shift is remarkably easy and positive. 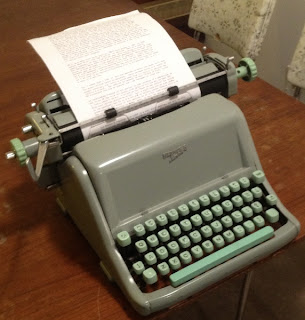 We put enough paper through the Hermes 8 to be able to recommend the machine with no misgivings, except to say that it might not be the machine one would initially wish to learn to type on due to the stiff action.  Of course, if one did learn to type on this machine, he or she would have a leg up on others who learned on less stiff machines -- the payoff would be typing speed and endurance.  The machine was clearly very expensive to manufacture and will take just about any abuse an operator could dish out on it.  For office and transcription work, the notebook holder feature materially adds to this machine's utility and value.  While the Hermes 8 is not our top favorite standard typewriter, it is a worthy and well made instrument.