Introduction of the Woodstock No. 4 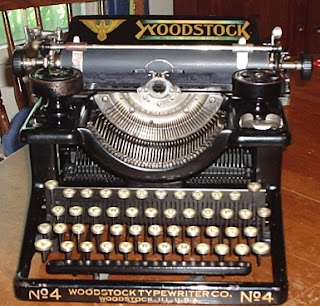 The Woodstock No. 4 was released to the public in 1915 as the second model from Woodstock Typewriter Company; it followed the No. 3 which had been released in September 1914.  At the time of the appearance of the No. 4 Woodstock, the typewriter market was already heavily saturated in the United States with visible machines from established makers, including Remington, Smith Premier, L.C. Smith & Bros., Royal, Underwood, Monarch, Fox, Oliver and Victor - all at the $100 mark for price.  In addition, Blickensderfer had begun manufacture of a true $100 standard machine at the end of 1913, which was getting some headway.  There were lower priced machines available as well; Sears, Roebuck & Co. was distributing the Harris Visible at roughly the $40 mark.

Woodstock clearly intended its machine to be in the true $100 or "top end" bracket, but took a marketing approach which not only allowed it to charge less, but depended upon it and in fact capitalized on it.  We have a Woodstock sales brochure here which probably dates from the last quarter of 1915 that tells the story.


This brochure contains 126 testimonials from actual Woodstock purchasers, most with tiny photographs of the users.  The reason that this was possible was in fact that this supply of testimonial from the new purchaser back to Woodstock was a part of the purchase agreement.

Woodstock nominally priced the No. 4 machine at $100.  However, it offered to its buyers what it called the "Credit Draft Agreement," which cut the price of the machine by $32 for a total by-mail installment cost of $68 if the purchaser agreed to show the machine to friends, family and other prospective purchasers and to send back to Woodstock a testimonial of their experiences with the machine.

From the testimonials, we can glean a few facts about Woodstock's sales terms in late 1915.  The machines were offered on five days' trial.  They were guaranteed for 18 months against defects in material or workmanship.  Woodstock also paid all of the shipping charges for the machines, whether they were kept on installments, or whether they were returned after the trial period.  Although it appears that most of the business was being done by mail order, Woodstock did have agents representing some territories at this time, as proven in the testimonials from those who purchased from them.  According to Typewriter Topics' 1923 compendium, Woodstock did not launch its official sales and distribution organization until the beginning of 1916.


The front and back covers of the sales brochure are above, left and right; click to enlarge.

Interestingly, Woodstock has added a further claim to its repertoire of angles by which to sell the machine; throughout the brochure, the Woodstock No. 4 is repeatedly referred to as the "Woodstock Visible, Silent Typewriter" and many of the testimonials refer to it as such -- although in other places the machine is simply referred to as the Woodstock.  The company was pushing the assertion that their machine was the quietest of all of the conventional front-striking standard machines of the day; it does so numerous times in the brochure, and numerous testimonials ensure that it was when compared to other makes.  None of the other makes is called out by name in the testimonials, though; they're lined out or asterisked out so that the clear inference of mention of a specific brand is made but the actual brand is never identified.

The brochure also takes the opportunity several times in its many pages to identify that the four bank, single shift keyboard had become the industry norm and that three bank double shift machines were slower and less convenient to operate.  Certainly, this sort of statement has the Oliver in mind, but also might have the Harris Visible in mind, considering that Sears, Roebuck & Co. owned Woodstock but was also distributing the Harris Visible through its catalog.

Looking generally at what Woodstock was emphasizing in this sales effort, we find that extreme visibility, mechanical simplicity, quietness of operation, and a standard 4-bank single shift keyboard were the things mentioned the most either in the material or the testimonials.  In terms of the sales campaign, Woodstock clearly indicated that their machine was in the $100 class but that it had a unique plan to allow the buyer to pay far less - in return for provision of testimonial.  The Woodstock brochure sets the whole campaign plan out fairly neatly: 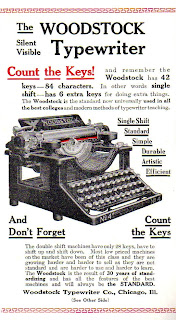 "...we have determined to sell the Woodstock Typewriter for no more than is charged for other typewriters, namely, $100.  We have further determined in order to rapidly introduce our machine and its superior qualities to the public that we shall within the shortest time possible introduce the Woodstock Typewriter into every city, town and hamlet in the United States, distributing thousands of typewriters.  For this purpose we have a very unique plan which appeals to everybody with a taste for the best.  Our plan is very simple, yet very effective, and it is based on the principle of giving the purchaser every possible advantage in return for which he agrees to lend friendly assistance toward further sales.  We are leaving in the purchasers' pockets what would otherwise go to expensive advertising and high-salaried salesmen, with their costly hotel and traveling expenses.  We are giving concessions that no typewriter company was ever known to give before.

The other benefits are everything that anyone could possibly offer, absolutely free trial, express prepaid, whether typewriter is accepted or returned, easiest kind of installment payments, less than is charged for rental on a high-class typewriter, and on top of all this the greatest benefit and the feature that has proven so attractive is our Credit Draft allowance of $32.00 off of our regular $100.00 price in return for good will and friendly co-operation, as his conscience and convenience may dictate."

As I have mentioned a number of times both on my websites and on this blog, rebuilt typewriters of various sorts (whether rebuilt and distributed in volume, or rebuilt and sold individually by dealers) were always a factor, and at the time the Woodstock was introduced, the FTC action against typewriter rebuilders had not yet fully evolved.  As a result, hordes of poorly refinished, lower quality used machines were being marketed both by mail order and through various dealers and their low prices were definitely a problem for companies honestly manufacturing brand new typewriters.  Woodstock takes a whole page in the sales brochure to address the rebuilt typewriter competition:

"Look Out!  for Second Hand, So Called "Rebuilt" Typewriters 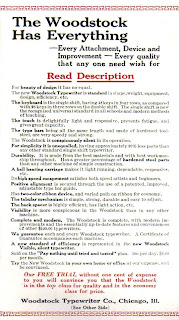 REFINISHED WOULD BE A BETTER WORD for this uncertain article of commerce.  The people throughout the country have for some time been imposed upon, and in many cases very greatly deceived by these revarnished, renickeled creatures of uncertain age, whose exterior disguise gives little intimation of the infirmities and impairments within.
THERE IS NO SUCH THING as rebuilding a typewriter to make it as good, or nearly as good as new, without literally making a new machine, and this is not done.  The "rebuilding" process commonly followed is usually nothing more nor less than a "patching up" that would be given to any worn out piece of machinery to make it last a little longer, and the greatest effort is given to renewing the exterior finish, which is not an essential element in the efficiency, durability, or practical usefulness of a typewriter.
THE FACT THAT THESE WORN OUT MACHINES do not, and cannot have all their worn parts renewed, coupled with the fact that they are also usually back number models, make them a thing of very uncertain value and service, to say the least.
ADVERTISING PAGES ARE FILLED with advertisements, calling attention to a low price on various makes of typewriters, and saying little or nothing about the fact that they are of this so-called "rebuilt," back-number class, and also illustrating the large profits in this class of business.
ALL THIS SHOWS:  That it is necessary, every so often, that a new machine be built, bringing all previous experiences down to date in one harmonious, complete structure, getting away completely from the "added-to," "tacked-on" features, and from the curse of the "rebuilt."
The Woodstock has done this.  It is NEW from Start to Finish.  There are no Second Hand Woodstocks.  R-E-B-U-I-L-T spells "REGRET"."

{Two images, front and back, of advertising card found inside the sales brochure; click to enlarge.}

There are two ironies to be found overall in this brochure.  First, the company states that it can allow its buyers to keep the most money in their pockets because it has no salesmen, nor their associated costs - but it did launch its sales organization the following year.  Also, Woodstock tells its buyers the hazards of rebuilt typewriters - but it did eventually begin factory rebuilding and distributing its own machines some years later.

As we now know, the Woodstock Typewriter Company was a success practically from the start.  The company introduced its No. 5 machine late in 1916, and opened an export organization at the beginning of 1917.  From this time, according to Typewriter Topics' 1923 compendium, Woodstock operated on a practically continuous backorder situation, so great was demand.  I have often wondered, considering the saturated environment that the Woodstock entered, how it could have been so successful.  The very ingenious marketing campaign finally revealed by the Woodstock No. 4 sales brochure we've seen above might be the biggest part of that initial success - of course, coupled with the fact that the company was indeed offering to the world a typewriter of the highest caliber. 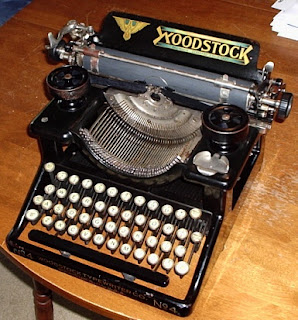