The Adler I brought was the 'hit of the show' for typists during the Fifth Annual Typewriter Collectors' Meeting at Herman Price's Chestnut Ridge Typewriter Museum.  Richard Polt, Martin A. Rice and Jack Knarr all declared that the machine was among the finest in actual use that they had ever encountered.  Because of the buzz generated by this machine -- and also because it comes from a very highly uninvestigated time for German-made typewriters in English-language sources -- I've put together a complete study of the machine including design details and features in the usual style, as well as historical background and outside site references for context. 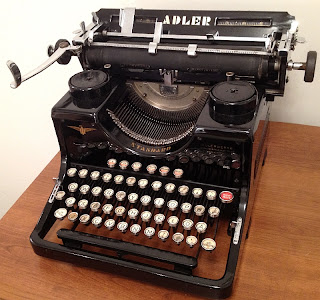 The machine seen above is properly simply designated as an Adler Standard, serial number 575954 and which was manufactured in 1938 by Adlerwerke vorm Heinrich Kleyer, A.G. Frankfurt, Germany.  The line of Adler front strike standard machines was introduced in 1931 with the Model 31 and was made until the Second World War (reduction in manufacturing of typewriters to build war materiel, and later bomb damage) forced production to halt.

The Adler office machine seen here is a standard, four-bank keyboard machine with 45 keys typing 90 characters, and which incorporates segment shift with shift motion in the downward direction.  The machine is fitted with a six-key decimal tabulator, whose tab stops are set and cleared individually through use of a lever at the right of the keyboard.  A lever on the right end of the carriage will simultaneously clear all tab stops.  The keyboard includes a back space key whose keytop legend is red; the margin release, however, is operated by a button located on the right front of the machine.  On the front left of the machine is the lever for reversing ribbon travel.  To the left of the keyboard is located a three position ribbon color selector lever.

Paper handling on the machine comprises an excellent combination of features.  Two bails are incorporated, which may seem complicated but in service these do not get in the way.  The nearest bail is of the conventional type, which both lifts up with the actuation of the paper release lever but which will also separately pull forward toward the typist and lock; slight reverse pressure returns the bail to its normal or engaged position.  The rear bail holds paper guides which will prevent even the thinnest onion skin typing paper from re-entering the feed once typed upon and moved up.  Spacing up to triple, in half space increments, is provided for and the return lever is of excellent design and location.  Margin stops are set in the normal way, but windows in the paper table at each side allow easy view of the margin stop locations by way of included scales and red hash lines on the lower margin stop rack blocks.

The Adler Standard incorporates a quickly removable carriage.  The carriage and its rail and rail base, along with main spring assembly are released by use of two push rods located on the rear of the machine.  Once the rods are depressed, the entire assembly quickly and easily lifts straight up.  Replacement is just as easy, and the rods need only be pushed slightly upward to spring back to their extended or "locked" position.  The tabulator stop and set/clear tunnel assembly on the rear of the machine provides only minimal interference to the performance of this procedure. 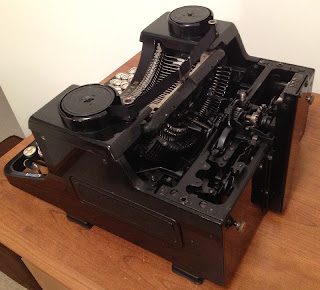 The machine is manufactured to the highest quality in both material and fit/finish.  The machine overall is exceedingly solid, but incorporates a rapid and light stroke which is finished with a high degree of acceleration and force due to the special design incorporated in the key lever / type bar mechanism.  Since the action of the Adler is, to the feel of the typist, somewhat unique, this design is worth briefly investigating.

The design incorporated into the Adler Standard which affords accelerated type bar action is actually the patent of one Berthold Baumann, under license to Triumph Werke Nurnberg A.G.  Adler and Triumph front strike standard machines were, as Wilfred Beeching mentions in his volume "Century of the Typewriter,"  "cross pollinated" for most of their lives, which accounts for the coverage of the design in question by a patent assigned to Triumph. 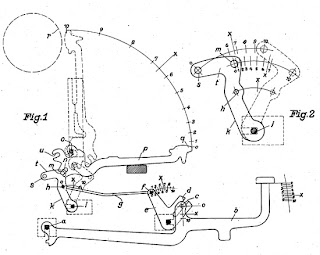 As can be seen in the first illustration from US Patent 2117235, the key levers actuate a swing link which then pulls a reach rod forward, pulling on a swing link of peculiar design that connects at rest and for the first part of its travel with a pin and slot connection to the type bar.  As motion continues, the first connection by pin and slot is broken and a second pin engages the open hook that can be seen mounted high on the end of the type bar and which protrudes behind the segment with the type bar at rest.  This second connection changes the ratio further; note the numbered positions along the travel of the keytop downward, evenly spaced as compared with the position of the type bar along its arc with the same corresponding numbers.  It can be seen how much the angular travel increases as the type bar nears the print point.  The inventor, Baumann, has the following to say about the design in the opening remarks of the description of the patent:

"This invention relates to a novel kind of actuation for the type levers of typewriters, in which two intermediate levers are interposed between the key lever and the type lever.  It has this advantage over the known arrangements, that the type lever experiences an additional acceleration in about the second half of its swinging motion towards the platen, but that the pressure applied to the key remains practically the same and equally soft and elastic during depression of the key.  As the return swing of the type lever also takes place with an additional acceleration, a very great increase in typing speed results, which could not be obtained with the typewriting systems hitherto known.

While type lever actuating systems are known in which the type lever is accelerated towards the end of its swinging motion, in the arrangement according to the invention this known acceleration has an additional positively regulated acceleration imparted to it. 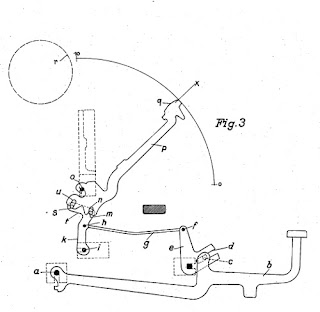 In actual operation, depression of the key levers through their travel is easy to a point at which resistance increases markedly near the end of travel; this occurs when the type bars' projections meet the U-bar behind the segment.  This of course, when running the machine at a normal typists' speed, is hardly noticed and in fact markedly aids the rapid throw of the type bars away from the print point after the impressions are made.

This typewriter has been judged by all exposed to it as absolutely excellent in every respect; an especially outstanding recommendation has been given by all for its unique touch.

Click here to see the Triumph page on the European Typewriter Project site; note the similarities between the Adler Standard seen here, and the two Triumph machines seen third (Triumph 10, austere) and fifth (Triumph Standard 14, mislabeled as a 12 on the caption) on the ETP page

Click here to see Richard Polt's post from the Collectors' Meeting wherein he mentions and shows the Adler Standard.

The Adler Standard as seen on this page is pictured on page 93 of Wilfred Beeching's "Century of the Typewriter" (1990 Edition) where it is described as "Model of 1938."  Serial number data follows on page 96.  Serial data can also be found on tw-db.com.

The first Adler office sized, or Standard machine which was a conventional four bank front strike machine was the Model 31 of 1931.  Other later machines of various front strike and thrust action incorporated model numbers matching their years of introduction through 1937 (the Model 37 being yet another large thrust action machine) but the Adler Standard as seen on this page has no model number or name other than "Standard" on it anywhere, and none exists in literature available to the author at this time.

Removal of the carriage for inspection caused me to note the unusual design of the final swing link in the key lever and type bar mechanism; a half hour's worth of searching for Adler patents on the design proved fruitless, but examination of other material for background caused me to question whether the patent for the design (if one were filed) might be under Triumph rights, which it was.

Royal Typewriter Company had made some amount of press concerning E.B. Hess' designs for accelerated type bar action long before appearance of the Triumph patent; see Typewriter Topics' 1923 compendium "The Typewriter - An Illustrated History" under Royal for a brief description.  Many machines other than the Royal Standard (including the Adler and Triumph machines) eventually incorporated key lever / type bar mechanism designs which afforded type bar acceleration. 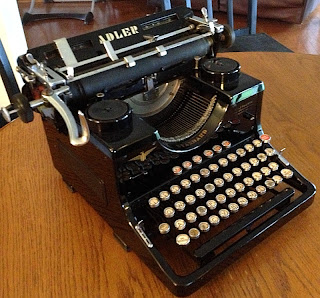