What's wrong with that Webster? The ANSWER(S). 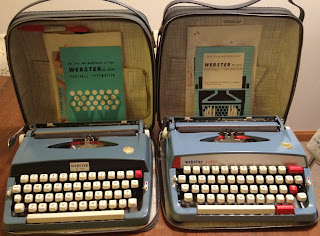 Time to reveal just what it is that is unusual about our subject machine for this feature: the Webster XL-800. There is SO MUCH to go into about these Webster machines, which are of course re-branded Brother typewriters, but that is information for another article. It would take many articles, or one REALLY LONG one to go through the complete evolution of typewriters made by Brother, and we could probably write another several on all the re-brandings of their machines sold through other outlets. But we will stick to the machine in question here. Above, you will see a Webster XL-500 on the left compared with our XL-800 on the right. Notice that the machines are very similar mechanically. As for sales of machines branded "Webster" the XL-800 followed the XL-747 which followed the XL-500 we see here. Some viewers got one of the differences (or oddities) exactly right, which is that the 800 has an extra wide tabulator key, which seems to take up the width of two keys when compared to the 500. This renders the 800 a 43 key machine, while the earlier 500 has 44. Now of course the 800 is a later variant, so what gives? Isn't that a step backwards? I mean, everybody's marketing made a big deal once portables got all the features/keys that office sized standard machines had, right? So you GAIN the rapid-space feature and LOSE two characters? Why do that? (Remember, you can click on all of these pictures for a larger view.) 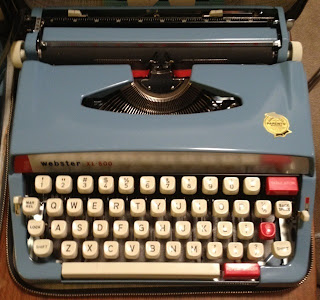 Above is an overhead view of the XL-800, and we can see that the tabulator key does indeed occupy what would, or should be, the position of two keys. Another unusual thing about this machine is that red key top. See it? That is the "@/cent" key. Now, Brother machines and all of their variants can indeed have red "Tab" keys. MANY do, in the top row, right most position, BUT taking up only one key width. But this machine has not only a red double width tab key, it ALSO has a very unusual RED CHARACTER key. Hmmm.....Let's take the cover off and look around inside. 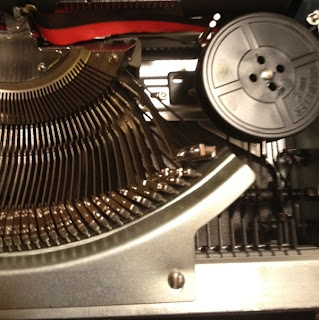 Now with the top cover off, we can see exactly what is "wrong" with this machine! Or, the reason that there are SEVERAL things wrong with it, when compared to any other of this model of Brother machine. (Keep in mind here, there are THREE and ONLY THREE basic Brother manual machines EVER MADE, but with the way they changed styling and casings it can be confusing!) This Webster XL-800 has a "Changeable type" head slug on it's RIGHT most type bar, (@ /cent) and the next type bar over, usually "+/=" is not installed because the extra width of the changeable type head does not allow it! Thus, there would have been a gap in the keyboard, so rather than have that, Brother widened the "tab" key to take up the space. The red key top on this machine denotes a changeable type head, NOT JUST the "tab" key as on all previous Brother made machines with this mechanism. See the empty slot in the segment, just to the left of the right most type bar? See the very large head on the end of the right type bar? There you have it! A Brother with more than one red key top should be suspicious, and this is why. 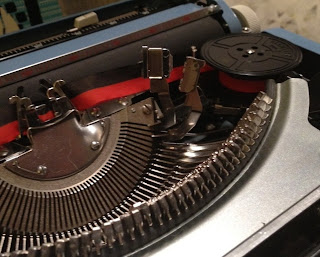 Above, we have the changeable head type bar raised, and to its right, a normal slugged type bar. Note the size difference between the two. With a segment this tight, (if you have a "small" Brother machine you can see for yourself just how close the type bars really are), there is NO WAY an oversized type head would fit anywhere without omitting one or more adjacent type bars. Of course, putting it out on the end means only losing one key or two characters, but it makes the "red" changeable key top become a lower row key. So far as we know, after having studied literally hundreds of Brother machines, the Webster XL-800's are the only "small" Brother machines to EVER HAVE the changeable type feature! This of course implies that other Brother machines have this feature, but I digress... 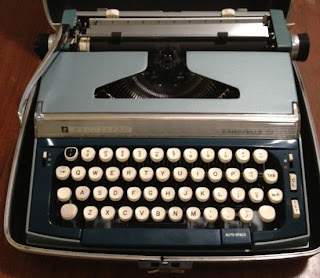 Above, we see a machine which, in its many guises, is usually thought of as being the only big selling U.S. machine with changeable type, namely the Smith-Corona "Galaxie" series, (Galaxie II and later) here seen in a re-branding for retail giant JCPenney as their "Caravelle 10". Note the black key top, denoting the removable key top on the type bar that holds their version of "Change-a-type" (as Sears called it) and which key top could be replaced with a top matching the symbols on the head you swapped out. Smith-Corona machines are widely known when it comes to a changeable type feature. But Brother? Not widely known at all, and only in the "big" machine is it usually seen. But this Webster XL-800 is indeed a mutant, that's why it's in this feature!

So, the next time you think of how easy it is to change fonts or type special characters on your computer, think back to a time when characters on a keyboard were VERY limited, and manufacturers had to resort to all kinds of things to get consumers extra characters beyond those available on a standard keyboard. (I know, just leave a space and wtite it in. We all know what that looks like.) And there is the reason to do this, to go to this length to make that possible: sales! Sure, no front settable tabs on this thing, BUT it can accept other characters, just like an SCM machine! And just like many other times in the evolution of the portable typewriter, it is an example of a full size or office sized "standard machine" feature being introduced into a portable to gain an advantage over the competition, or to at least keep up with it.