Alpha and Omega, sort of 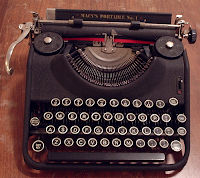 At the recent gathering that Richard Polt held at and around his home, I was treated to the sight of a Barr typewriter. The Barr, I thought... One of the biggest research articles I ever wrangled together (with the help of innumerable friends in the hobby who can always be counted on) was on the Barr; the history, the variants, the options, the colors. The whole nine yards, as always on one of those big projects, but on this one it was really big and the original article that first appeared around November 2004 ran eight pages.

I'd just gotten an early Barr (serial 2521, in red) a month before or so and was really intrigued by the machine and its design. Moreover, the machine's apparent superiorities in terms of quality vs. cost of manufacture made it seem as if it should have gotten a better shake. So the whole huge article gets done, and later there's more information and before you know it there are more Barr machines pictured on the net on that article than pictured total before, everywhere. But I only still had one!

Yes, there are colors and options and model variations and so on but I'd never pursued another one. However, at the meeting I was reminded that I had always .. "always" .. thought that I'd like to get a machine as late in the overall production (from Weedsport, to be sure) as my red one was early.

So you know that when I saw a Macy's Portable No. 1 show up "Buy it Now" on e-Bay and I was the sixth person to view the page, I naturally hit the BUY button. The price was fair... probably even good. Especially if you consider I wanted one very late; this one is serial number 39840 which is about as late as my red one is early.

We'll be featuring more on this machine from a technical standpoint -- that is, design, manufacture, and operation -- in the very near future. You can consider this to be "Barr 201" if you consider 101 to be the original article. So keep checking back.
Posted by Will Davis at 8:05 PM