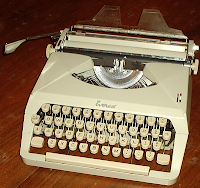 In June, Richard Polt held what has come to be known as an epic collectors' convention in Cincinnati, Ohio. Among many other things that happened there was the very kind offering by Alan Seaver, who I had long wanted and waited to meet, of his Everest K3 typewriter. I in fact settled the deal for a twenty, being very appreciative of his offer and hoping to at least partially compensate the fuel cost that a five liter Mustang might generate moving such a machine over about a fifth of the continent. Click on the picture to enlarge it.

Some back story is needed; years ago, while commenting generally on the rather poor and rather large Everest K2 portables, I was met with a message that Alan had a K3. I hadn't heard of that model before, and when he told me that it was a rather flat machine and unlike the K2 or in fact any other Everest, I was intrigued. Years passed without any chance of seeing another one until Alan decided to generously allow me to have his.

The Everest K3 (launch into review here) is a compact if not flat machine which surprisingly incorporates segment shift. The example seen here is serial number 1101320, which according to the British OMEF Typewriter Age Guide means that the machine was made in 1962- the last of three years in which the K3 was made. Everest had at that time been bought out by Olivetti and production was running down; the standards and the larger desk-model K2 portable ended at this same time. The K3 is a fairly well made machine, with metal body and interesting plastic (lucite?) paper support. The segment shift action is positive in feel and in point of fact the machine is superior to a few contemporary flat machines, as for example the flat Royals from Holland, in touch. Clearly, if an Italian-made small portable were to compete with the Olivetti Lettera 22, it would have to be solid and segment shifted. The machine does occupy about the same footprint as the desk model K2, incidentally.

Having said all that, the machine is not in overall fit, finish and quality excellent but rather "acceptable." That may sound like a disappointment, but it's a lot better in its class than the K2 which is universally disliked for its dead feel. Seeing further that the K3 is the final new overall design from Everest, I'm inclined more to view the K3 as a collectible machine and not as a workhorse.
Posted by Will Davis at 5:31 PM