The Ideal A in detail

In 1900, the firm of Seidel & Naumann introduced a machine that it labeled as the IDEAL, and which was designed by American engineer E. E. Barney. Barney would later become something of the "front strike visible" guru at Union Typewriter, working for a number of that operation's subsidiary companies. For a review of the Ideal branded typewriters over the years, look at the website of the European Typewriter Project and navigate to the Ideal page under "Germany."

The photos here are of our family's Ideal A, serial number 13023 which was built sometime between the first two examples seen on the ETP site and which are owned by Tilman Elster. That means a 1904-1908 time frame, so this machine is both from the front edge of the mass-production "visible writing" generation and over 100 years old. If we consult Dirk Schumann's "tw-db.com" site we get a date for this A2 variant machine of ours at 1903 or maybe 1904. 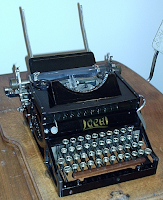 The Ideal A is one of the most unusual typewriters ever manufactured due to its inclusion of what I refer to as composite shift. Typewriters normally use motion of the carriage to shift cases and figures, or else they use motion of the type basket / segment for this purpose. In the case of the Ideal A, both the segment and the carriage move simultaneously when the shift keys are depressed; the segment moves up, and the carriage down, against a very strong pressure. The silver tab on the front left top is the shift lock- you pull it up to lock the shift with shift key depressed. Another unusual feature is that the carriage return lever is mounted to the right of the keyboard, on the frame of the machine instead of on the carriage. This is accomplished by a shaft that runs parallel to the frame on the right side, along to the rear of the machine and to the front of which is connected the lever. As typing progresses, the lever moves from a position in which the long part of its shaft is roughly just outboard of vertical to a position above the keyboard with the long part of the lever pointing roughly at the ten o'clock position. Operation of the lever first causes, by a roller contact, the movement of a bail on the carriage forward (toward the typist, but invisible underneath) that causes the spacing action to take place through a linkage from the bail to the right side of the carriage to the ratchet. When all travel of the bail, and thus line spacing is complete, the roller will move to the end of travel on its small mounting and the linkage will contact a tang that allows it to move the carriage out to the full return position with full lever travel. The lever can be used to continue line spacing with the carriage fully returned, but with this arrangement can't just return without line spacing.

There is a touch regulator of sorts on the machine - a metal strip is held against one of the intermediate levers in the escapement trip mechanism which can be tensioned heavier or lighter by use of a thumbscrew.

Unusual too are the type bars, which are forked at the connection end; the split rides along a crescent-shaped guide as the type bar moves to the print point which does in fact have a print alignment fork that shows very heavy wear. No doubt this style of mounting and type bar may have been superior to individual mounts with no alignment guiding or fork as in the original Monarch Visible and the L.C. Smith & Bros. machines, but it's fairly primitive looking to us. Note that this machine doesn't have a segment like modern machines, but rather individual mounts for the type bars; often we use the term 'segment' now for convenience when originally the term was 'basket' shift for machines that moved the 'type basket' (colloq).

The machine types decently well if not solidly. The type bars have a lot of slop and lost motion in the direction of travel when not near the print point, due to the simple four dowel and intermediate link setup for the key lever and type bar mechanism - but impact to the print point is solid enough. The machine almost asks you to follow the keytops all the way down which is not correct technique for modern typewriters. (Note: Yes, we know - this isn't a modern typewriter!)

Overall, the Ideal A is one of the most impressive looking typewriters you're ever likely to encounter. The open sides with the IDEAL name cast in are especially noteworthy as is the style of the case, if you're lucky enough to have it (and we do which explains partly why this one's in such good shape.) Operationally the machine isn't up to modern standards as we know them but then again it was invented before those modern standards of operation were set in stone and adhered to by any company that wanted to compete. Viewed in proper context, the Ideal A was clearly a very high quality machine capable of heavy use. It's now apparent to us, having very early and very late Ideal standard machines, that quality at Seidel & Naumann was top priority and the fully operable examples we have of A from 1903/4 and D from 1946 prove that clearly.
Posted by Will Davis at 5:05 PM