Let's take a break from our ongoing ABC series (much more to come on that this week) and get out a typewriter to examine and test. 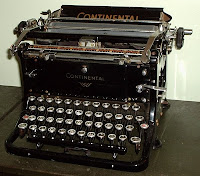 There is something almost tragic about the Continental brand of typewriter; the company originally introduced its first typewriter, a four-bank single shift visible writing $100 machine in 1904 and later on added portables and the vaunted Continental Silenta prior to the Second World War, and in the decade preceding that conflict had become one of the well-known makers of typewriters certainly all over Europe and in the trade itself, certainly worldwide. Hostilities curtailed production; the tooling for the Silenta, according to Beeching, went off to Russia and disappeared while that for the portables went to Belgium where the machines were built briefly and badly. Other marques continued to fill the void of typewriter production post-war; the Continental essentially did not (although the Communists appear to have restarted the standard machine; see our European Typewriter Project page on the Continentals.)

My example shown in the photo is from 1938 and is in fine condition. Many pre-war machines from Germany weren't so lucky- the war was hard on typewriter production and damaged machines were often patched up and made to soldier on. This machine is in very good shape. I wanted it all the more when it became available as it had an English keyboard (and this is a factory keyboard, not a re-solder job.) I've just run a full sheet of paper through it at various speeds and examined it overall, and here are the details....

This machine might properly be called the Continental Standard A since there is a decal letter "A" on the paper table, although this might just be the carriage width. The machine has 45 keys typing 90 characters; the keyboard includes a numeral 1, an exclamation point, a "1/" symbol for fractional numerators, diacritical and German letters and a standard English layout for the alphabet. Carriage release, paper release and line space / return levers are all duplicated on both sides of the carriage on this machine, which is very handy. We note that most Continental standard machines seem to have much shorter return levers that don't drop down over the front of the machine as to the levers on this example; this lever placement took some getting used to but it seems that when familiar it might allow higher speed since the total hand travel to return the carriage is less than it would have been with the older style short levers. Item: How many machines have return levers on BOTH sides? Only the Demountable comes to mind immediately - and in that example, they are not identical since the left side lever is practically duplicative of that found on the Harris Visible, all models, and Rex Visible, all models.

The action of the machine is very sturdy feeling, with a feel of high key resistance and fairly rapid type bar return. The control arrangement on the carriage is convenient and sensible; the small machined block that is the setting device for the line space mechanism is a great touch, and very easy to use. Line spacing is available in half line space increments from one to three line spaces, as is very typical of European machines. The backspace key seems to be perfect; both the location of the key generally and its height seem to be ideal for me, although this again is a matter of personal preference. The margin release and bypass controls on the front left of the machine take a bit of getting used to but once figured out are easy to use. Unfortunately, the tabulator device on this machine is not functional so that we cannot review it; parts are missing. (Again, not surprising for wartime machines.) The carriage shift is about as light as one could expect for a full size machine. The machine does require strong fingers and does not reward uneven speed or touch at all; in fact, I was able to jam type bars fairly easily with the machine when deliberately typing badly.

Control layout and operation on this machine are above average; touch is average; type bar return speed is average or just below; fit, finish, tolerance, in other words quality of material and quality of assembly are absolutely first rate for any typewriter made anywhere at any time. So then I rate this machine just above average overall for use today. (Your results may vary.) Stated briefly; I like it!

Final note: We do have a Contiental Silenta that's been sitting around neglected since being purchased for quite some time and we'll be getting that machine tanked, lubricated and adjusted in the near future for full review, so watch for it!
Posted by Will Davis at 5:46 PM

Email ThisBlogThis!Share to TwitterShare to FacebookShare to Pinterest
Labels: Continental