What's wrong with THIS thing? 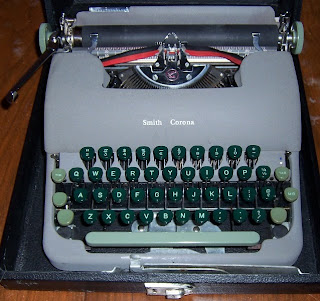 Time for the second installment of our popular "what's wrong with this thing" segment where we show you a picture of a typewriter and invite you to comment on what you think is odd about it. True, there are a lot of "odd" machines out there, but the point of this feature is to show machines which at first glance may not seem off, but under closer examination vary in some way (or ways) from "normal" production machines.

So here it is! I have been suffering under this thing's somewhat "cyclopean" glare ever since I promised to put it on here, before Thanksgiving I think! Or is it more like that mythological monster that had 100 eyes instead of just one? I mean, are the keys eye-like or the clearance hole through the top cover? You know, Will and I had an electric hand mixer in our family when we were young that had a definite smiley-face on one end. It was a Dormeyer, and towards the end every time we used it it smelled like it was burning the motor windings. I imagined it grinning evilly as flames shot out the "smile", mixing...... flaming... MIXING!! FLAMING!!! AAA--HAAA-HAAA-HAAA-HAAAAAA!!

Ahem. So, intrepid type-spotters, what's up with this thing? To cover the bases, no we did not make it, yes it works, no it isn't photo shopped, no it was never on fire, and yes it did fit in my stocking, which promptly went south scaring both Santa and our dog, leading to some unpleasantness between the two.

Post your thoughts below as comments! We had a great response on the first one, so hopefully everybody will have fun with this one. Maybe you will spot something nobody else has, including us! Get out those bi/tri-focals and have a ball. (Really? It's just me? NOBODY ELSE has them? REALLY?) Our "answer" will be posted up next Monday, so check back then to see how everyone did!
Posted by David A. Davis at 4:24 AM