Years back, when I constructed my "Visible Typewriters" website section, I included a thorough article on the Victor Standard machines, with help from Peter Weil, Richard Polt, Jim Dax, Tilman Elster and Thomas Furtig (who is on board with me on this new site's "ABC in Detail" series, still ongoing.) We reviewed the history, the known models and even some relabels, and fully examined and tested a Victor No. 3. What's left to do is to get out and test my Victor No. 10... so let's do that now. Better late than never. 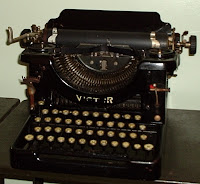 The Victor No. 10 was a 42-key, standard, $100 machine meant to compete with the best of the other machines in that price range. The machine has, as standard equipment, a rather novel decimal tabulator device which we'll describe shortly, and completely unobstructed view of the print point from all useful angles from the front. Many machines of the early 'visible' period incorporated front-mounted margin setting (see the Continental we just reviewed) a la the original Remington blind-writers, which of course partly obstructs the front view of the machine; some makers, like L.C. Smith and Royal heavily advertised the openness of the front on their models and the Victor machines all fall properly into this sort of visible machine.

This particular example has been very heavily used and repainted partially at least once; this is why the paper table and front frame decals aren't visible. While it's nice to have really mint condition machines in many cases from a collecting point of view, from a research point of view it's also nice in many cases to have some with high mileage so that the effect of wear can be judged. Further, it's nice to see what we might today call an "off brand" machine that stood up to the test of time.

Of course, the front of a machine gets a lot more surface abuse than the back so that commonly the rear decals are in much better shape than those on the front- and that's the case with this machine. It's interesting to note how prominently the machine tells us that it's made in America; we know from Typewriter Topics' 1923 compendium that Victor had been essentially exporting all of its production for about six years at that point, so that this labeling makes sense. And collectors should note that the list of patents found in the same places on the earlier models is still there, but much longer and running through 1919.

The No. 10 Victor has margin stop devices mounted to the rear of the carriage, but fixed to the frame of the typewriter and not to the carriage; as a result, the setting of the margin stops is like that of front-mounted designs, or else like that of the Monarch Visible in that, giving one side only as the example, the stop on your left side controls furthest left motion of the carriage and is thus actually the right margin stop (if we say 'right margin stop' thinking about the number of carriage spaces at which printing ends on the right side of the line.) This system would have been intuitive for those familiar with Remington, Underwood and Monarch machines but is backwards to most modern typists. However, once figured out and set, the device is no problem for modern non-secretarial and non-business work.

The decimal tabulator, standard equipment on all No. 3 and No. 10 Victors, is of unique design. The operating device consists of a depressed or dished button for the fingertip, a marked quadrant near the top and a pivot at the bottom. The quadrant is rotated to the corresponding number of places required for the column at hand (if entering "3042" then move the device to "1000" on the quadrant) and then the button is depressed. The rotation of the device to the desired digit translates by shaft to the rear of the machine and up to the top deck, whereby through linkage the entire tabulator stop rack is moved horizontally to match the number of typed spaces corresponding to the desired figure. Depression of the button then performs the carriage release until the stop is reached, at which point the device is simply released and the figure entered. We have tested many decimal tabulator designs and this device seems easy to use, although not truly intuitive, and would be handy once familiar.

The 42 key layout is fully standard. Note the shift lock key, above the top left of the keyboard. This may be depressed to obtain shift and the lock action simultaneously, or else depressed while the shift key is held. This is somewhat reminiscent of early L.C. Smith machines, if I recall correctly. The shift on this machine must be described as very stiff, and the shift key lever throw fairly short, so that strong fingers are required. However, this is nothing compared to the key action itself. There is no doubt about it - this machine is tuned for professional typists. Simple slow easy depression of the keys results in only the very lightest contact between the type slug and paper. This forces the staccato touch method for this machine. Once this method is employed, the key action is best described as very springy and stiff, with sharply increasing resistance feel with travel. Of course, at the highest speed typing the fingers are not following the keys down that far so that at this odd feel isn't important. Once this speed is achieved, the machine comes into its own. I have not typed a whole lot of late, but am not out of practice - and I think maybe this machine is in the upper rank of speed capability. (If Richard Polt has another get together with typing speed contest, I might bring it.) A very steady rhythm is needed with this machine and is rewarded; the key rest is hard, and the type slugs bounce on return which might theoretically limit speed - but I never did jam any type bars at all with this machine. Further, the type is dark, and in alignment. No skipping, piling, shading from machine error. I note here that this machine does in fact have elite type, in a very attractive type face with just slightly heavier than normal print so that the product looks between, say, that of any normal typewriter and that of an Oliver Printype. Having said all of this, I can add one thing: I do not know of any typewriter that has a feel like that of this Victor. There are distant similarities in feel, but none the same. The overwhelming feel of driving large springs with the fingertips when typing is notable. For the experienced typist, this feel is like that of an open top sports car; it demands more speed, and more speed, until the limit is reached. It pulls the performance out of you.

(Item: Other very fast machines can be subtle. The R.C. Allen, for example, feels a lot like many other machines vaguely if you just type lackadaisically. But as you speed up, you realize that the return speed of the type bars is adequate, the carriage doesn't skip, and the feel is good so you go faster and faster. But nothing about the machine MAKES you realize, at least initially, what it is. It's more refined, more well rounded. The Victor almost demands to be run one way - really fast, and really steadily - and rewards nothing else.) 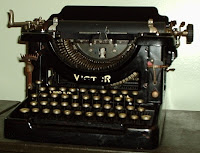 After getting my Victor No. 10 out following a long period of neglect (you can't pay attention to every machine when you have THIS MANY TYPEWRITERS) I'm impressed. The Victor as we all know played no significant part in the history of typewriters, per se; that is to say that nothing Victor did made any other builder stand up and take notice. Further, from the time of the First World War's end the company really didn't sell their machines here as much as it exported them which might to some give them no sense of real identity; they're American-made machines, but made to be exported for the most part. Bearing all that in mind doesn't negate the fine qualities of this machine, though. While there are some features that aren't top notch, none is really awful on this machine. The machine's worst feature can also be described as its best; the key lever and type bar mechanism's action is such that a new or non-dedicated typist might just give up on using this machine, but is such that an experienced typist might come to really prefer it over many others - including many major makes.

Once again, an 'off brand' or non-major make surprises us with something we would not have known had we not decided to really put all our machines to the test around here! Keep watching for more installments in the "Quick Look" series, which are intended to give readers the best possible brief idea of what a given machine is really like .. next to owning one.
Posted by Will Davis at 6:40 AM

Email ThisBlogThis!Share to TwitterShare to FacebookShare to Pinterest
Labels: Victor