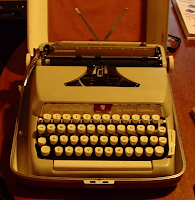 Many collectors and writers have noted the occasional appearance of either the larger desk model Smith-Corona portables, or else the smaller plastic bodied Smith-Corona portables, with the name "Golden Shield." Often these have attractive, extra decor not typical of that found on other relabelings of Smith-Corona machines. After years of having passed on these, I finally decided to get one for a look.

These machines will invariably say "Golden Shield" and "by Smith-Corona" on them, and this one as we can see says this on the front. (It is on the back of the carriage too.) There is also an attractive insert in the center, which has a small gold shield and the text "The Deluxe Line." 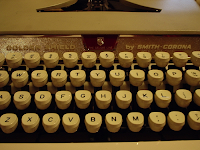 What is clear about this machine is that it is in the body style that we refer to around here as the 'chop front Super 5,' which indicates that the machine is overall a Super 5 series machine but one which has a top cover whose front is straight, and rather vertical, making it look decidedly chopped when compared with a conventional Super 5 machine. (Much, MUCH more to come on our whole line of collector designators for various Smith-Corona machines in later articles.) The only really unusual thing on the machine is the large paddle-style tab stop set/clear bar on the right. Other than decor, the machine is wholly conventional. This leads to one wondering why the labeling of the maker AND the distributor.

A bit of work here has found that Golden Shield Corporation was founded in March 1959 and incorporated in Delaware 3-11-59. Apparently the company's main place of business (offices, warehouse) was at Great Neck, Long Island, New York. The company essentially existed to distribute home equipment such as radios that it had designed, which were made by either itself or more often other companies. Many Golden Shield, or else Astrotone radios are found even today. The company had other product lines such as sewing machines, vacuums and of course, as we know, typewriters. We are pretty sure that this company itself did not survive the middle 1960's since it appears that its only registered trademark ("Astrotone") was sold to Magnavox in 1967. That makes us think that the company's life span was essentially 1959-1967 and that matches up well with the typewriters we see labeled as "Golden Shield." So then what Golden Shield was doing was having Smith-Corona specially decorate and label these machines, which it then distributed. It is interesting that the Smith-Corona name is not only so visible on these relabeled machines, but even on there at all.

Now we can take a look at the machine in our normal format! 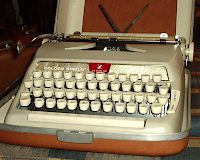 GOLDEN SHIELD Silent Meteor. Serial number 5TG 21565. Will Davis collection. Manufactured by Smith-Corona for Golden Shield Corporation, Great Neck, New York. The model name of this machine is very interesting; this model is what had been, prior to the introduction of the "6 series" or Galaxie machines, the Silent-Super but after introduction of the Galaxie machines had various model names in either the old Super 5 body or the new chop-front Super 5 body. The incorporation of half the old model name, plus a new name never used by Smith-Corona makes the model name all the more interesting to collectors. Of further interest is the serial number prefix, which is "5TG." Surely the G is to delineate Golden Shield, since the 5T is exactly what one would suspect to find otherwise. The five-digit number is unusual, to say the least.

So there we have it! Another mystery solved- even if not a major one. This machine gets extra points in our book too because internally it's the same wonderful reliable Smith-Corona machine coupled with a very assertively stated decor on the outside. It's now my favorite of all the chop-front 5 series Smith-Coronas!
Posted by Will Davis at 3:50 PM