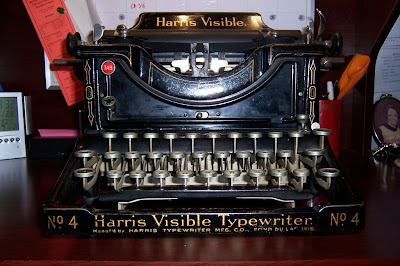 Get it? "Standard" blog post, and see? It's a "standard" typewriter? Who said that? What, what was that? That's lame? Ok fine. You think up titles then.

Having been participating in the Yahoo Portable Typewriter group chats lately, I came up with this idea for a post after a couple participants began discussing standard machines. I realized that I only have 3 or 4 standards, and they are not at all common ones! So, here we go. What do they all have in common? Well, other than that I own all or them, only a few things. Namely, only one of the designs would have any lasting power at all! Yet, these are some beautiful machines to look at. 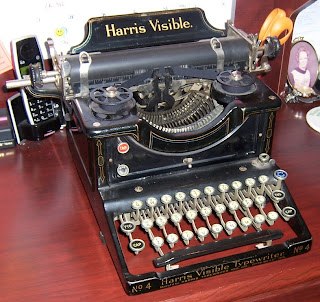 The first machine it that seen at the top of the page, a Harris Visible No. 4. This machine is in fantastic condition, and is useable too. Gotta love the blue and gold pinstriping. For lots more on these machines, and the fascinating story behind them, see Will's foundational article here:

These shots are all of my machine, serial number 24568, which is in pretty darn good condition as you can see. I really like the blue and gold pinstriping, don't you? I have always felt that these machines were not junk, but not at the top. You know, kind of a solid middle of the pack performer, not losing to every other machine out there feature for feature or comparing useability, but not winning ENOUGH to make it any further than it (or the company) did. This whole business venture is an excellent study in business theory and application, and shows just how hard it can be to compete in a tough field business-wise. Yes, the story is cool, totally apart from the machines. 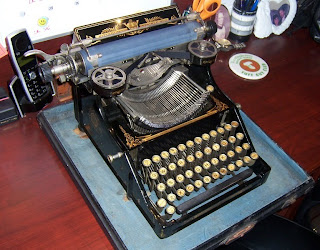 Here is a really beautiful machine, my Pittsburg Visible No. 12. This is a fantastic machine, and as seen here is totally useable. Yet, it is another one of those machines/companies who ended up failing. Again, refer to Will's in depth study, and also there you can see many more pictures of this very machine! 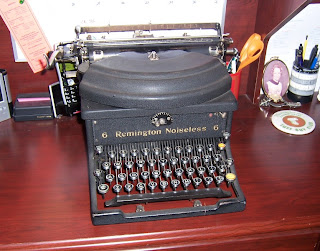 Ok, other than the Smith Premier 1 that was on this blog a while ago, this last machine is currently the only other standard I own, and I just got it today! Purchased on EBay from a well known and excellent collector, this machine fulfills a want I have had for years: a good condition, useable noiseless standard machine. Clearly this machine is useable, in fact the rear decal says: "Reconditioned at the Remington Noiseless Factory"!! Well, that could have been last week! These thrust action machines are a class in and of themselves.

Now then, we have the Harris No. 4, the Pittsburg No. 12, the previously described Smith Premier 1, and this last machine, a Remington Noiseless 6, factory reconditioned as some point. Go back and look at all the pictures above. Gee, the noiseless doesn't look too good compared to those others, does it? I mean, it isnt terrible, but these machines have a high, bulky look, odd with that rounded type bar cover contrasting with the square blocky shape of the body. No paper table either on these (these didn't have one!) to put a nice big decal on. No pinstriping at all, just liberal crinkle paint. Nope, no contest as far as looks go. All 3 others are better looking, even with one being an upstrike!

The serial number of the noiseless shown decodes to 1930. Long after all three other machines were made. And this basic design, never really a front runner in sales, would soldier on many more years. Despite it's mechanical complexity, it can be considered a successful design.

Here's the crux of the comparison: this Remington Noiseless 6 is an absolute DREAM to type on! It buries the other machines and not just by a little. Not only is it MUCH quieter, it is FAST. I couldnt pile keys on it unless I got sloppy with my typing. This machine responds to fast, strong, staccato fingers, just like someone who types a lot might be expected to have. This machine survived its original company of origin (The Noiseless Typewriter Co.) because it is inherently a GOOD MACHINE that is strong, solid, and does what it says it will do, that is reduce noise. But there is no sacrifice with that gain, other than the complexity. Not pretty, not ornate, no pinstriping, and yes I know it isn't exactly apples and apples but the least visually attractive machine here is the best to use, longest lasting of them all? Yes. And it also has an almost as good business story behind it too, but the thing about THAT is that this design had an edge, some advantage, that could keep it around. Just like Jack Nicklaus said about golf tournaments, he always felt that if he could just hang around till Sunday, maybe not even near the top, he had a good chance of winning the tournament. Some of the machines we all own did just that, their designs hung around, had something to offer, some edge or advantage, and even if their original company faltered, someone else saw the possibilities and kept the machine in the market, one way or another.

So, this display of just a few standards is at once a study in what I like personally, AND in business theory and application, useability, aesthetics, all kinds of things! Yes, those first three, the Harris, Pittsburg, and Smith Premier are top notch display machines. They all work too. Would that Remington turn any heads? Is it the "ugly friend" to the others? Maybe, but if I had to use one every day, it would be the Remington. No contest. Not even close. The Harris would certainly be second, but not a close second. Is the number of each of these you see roughly comparable to the success of the machines/companies? How many Harris' do you see? Now, how many Noiseless machines of all variants do you see, whether the original company, or Remington's, or Underwood's?

My Smith Premier 1 makes a wonderful display in my house, and everybody that sees it comments on it. Same with the Pittsburg, and no doubt why. I think they are beautiful too. But, being mechanical more than artistic in nature, and having typed LOTS on a LOT of machines, if a Noiseless were on display in someone's house, it would get the same reaction from me! The mechanical complexity and unique story of these Noiseless machines made me want one, to add to my small group of standards, and now after experiencing it's awesome useability I'm even more glad to have added it to my collection. Do you have machines on display, maybe in your office or in your home? How do they compare to your other machines NOT on display? Do you display machines that look good, or ones that WORK well, or is that even a consideration for you? Comment, and have a great week! David A. Davis
Posted by David A. Davis at 1:35 PM