A few years back, our Dad went berserk and started having me buy, as his agent, every Smith-Corona variant I didn't already own myself. We even duplicated a couple I did have to opt up in quality. Let's take a very random look through this ocean of Smith-Corona machines -- among the collector-typists' favorites -- in what I'm going to call the Smith-Corona-rama!

Note: There are two ringers in here; one acquired recently, and one is mine. 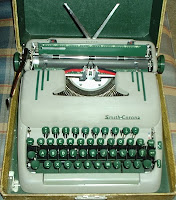 Smith-Corona SUPER. Serial 5T 118429. This machine is actually the first of the 'ringers' since we recently acquired it from Tim Champlin. Now, I've been telling everyone for many years that the first Smith-Corona machine with the key-set tabulator was the SUPER, and that these are about the hardest conventional Super 5 machines to find. Quickly, two more keys were added and the machine became the Silent-Super. However, during all this time I never actually owned one! So recently we rectified this situation with this fine example. This machine dates to 1954. For reference as we go along, let's point out one of the more obvious trim changes that occurs on these machines -- the logo. On this machine, it's green plastic and has an underline. On the very earliest Super 5 machines the logo on the front is actually burnished metal, with an underline. This logo style came next, and then after that a logo still of plastic but with no underline. 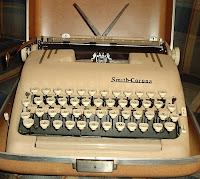 Smith-Corona Silent-Super. Serial 5T 459437X. This machine dates by its serial number to 1957, and is finished in Desert Sand color. Note the white keytops - white appeared sometime after the introduction of the Super 5 as a keytop color. But look closely at these keytops; they still have the "T" cross section of the early Super 5 style keytops. Note also that the logo is plastic, with an underline. You can find Silent-Supers in very many colors out there if you look hard enough. Certain colors were fitted with the original green keytops, while others got these white ones. Later on, only white ones were used. I don't have a hard date on that, yet. 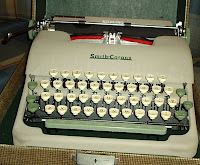 Smith-Corona Sterling. Serial 4AR 42795. How many people remember my brother Dave's last "What's wrong with this picture" feature? Many must, judging by the traffic it got. Those who do will find this machine of interest. Not only is this another mutant Speedline (4 series) machine painted in essentially Super 5 era paint, it's painted in Desert Sand and has white keytops! Note the keytops are "T" cross section, and note also that the logo is plastic with an underline. In point of fact, the keytops and the logo happen to closely match the previously seen Silent-Super with a production date of 1957. Is that even possible? It might just be, although I'm fairly certain that this color was available before that time. Still, this is about the latest-schemed 4AR I personally know of and it's also important to note that the other 4AR machines we showed with Smith-Corona name brand applied used decals to indicate brand, and model (if used.) This machine has the logo punched through just like the Super 5 machines, and in fact it's the same logo, making the decor even a bit closer overall to being truly Super 5. 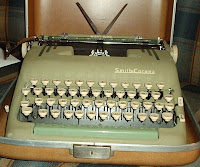 Smith-Corona Silent-Super. Serial 5T 624260X. Here is another Silent-Super, this time in a very nice darkish green color. I can't remember the factory name for this shade right now. We see again the most common Silent-Super decor features, with underlined plastic logo and white keytops with T cross section. About the time of introduction of the 6 series, also known as the Galaxie series, the keytops were altered and had the same top contour but a bowl-shaped bottom. This change doesn't affect the typist since the feel is no different at all, but it's another one of those small changes that's easy to spot outside the machine. This machine dates to 1960 by serial number. 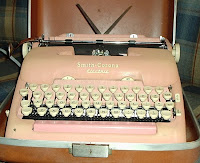 Smith-Corona Electric Portable. Serial 5TE 137750. Here is our second 'ringer' of the presentation -- this is actually my machine, not my Dad's. I acquired this machine many years ago, and it was my only electric typewriter of any kind whatsoever for a long long time. I got it at a resale shop for just a couple bucks because they thought it didn't work. It had a minor loose wire which I fixed quickly, but then I found out that all the type bars were stuck. The original lubrication had dried up and the machine was stuck. I very lightly used some oil and some brushes and some very light force with fingers, freeing each type bar and cycling it until the machine worked like a charm! It still does even today. It's very nice to use, actually. One fact many don't know is that these very early electric portables were not totally electric - some of the functions are still totally manually operated. The serial of this machine indicates it was made in 1958.

Smith-Corona Clipper. Serial 5C 419075. This is a 1959 machine, at the bottom of the line of large portables for Smith-Corona. It has no tabulator, no paper support arms, and two fewer keys than the contemporaneous Silent-Super and Electric machines we've just been looking at. However, note one obvious change on this 1959 machine; the logo on the front has been changed and is now no longer underlined. The logo on the Electric was also not underlined, either. We might then guess, roughly for the moment that the underline disappears in about 1958 or 1959. Of course, this is purely decorative and implies nothing about design- it's just a spotting feature. Note the keytops. Green, still T-section.

We just yesterday saw the Golden Shield Silent Meteor, which is in a modified body style that Dave and I have tagged as the "Chop front Super 5." This means that the ribbon cover has a flat front to it, instead of being rounded as originally designed. Now, many Sears (Tower brand) machines have flatter fronted top covers that are close to, but not always identical with, regular Smith-Corona branded chop front machines. In fact, Tower machines had the same style of top cover for many years, making one wonder if the chop front style was not just directly adopted by Smith-Corona to hold its own costs down a bit since it was a sure bet they'd be selling through Sears. With that in mind, let's go to Sears!

Tower Challenger. Serial 5CT 369487. Made for Sears, Roebuck & Co. by Smith-Corona. It's no mistake that I show this machine next; it's the Sears equivalent of the Clipper we just looked at earlier. Note the identical setup, with no tabulator, no paper support arms on the carriage and two fewer keys than the Silent-Super and Electric. Note however the very different looking profile used for the top cover; you will see this on the Tower Commander (with tabulator) and Tower President (like the Silent-Super) as well as other Tower models. It's very much like the chop front cover used on in-house branded Smith-Corona machines, but it isn't perfectly identical. If we assume that this machine's serial number is running in line with Smith-Corona's regular production, this machine is only a year or a year and a half older than the Clipper seen above. Let's move a bit later, and up the price scale a bit, at Sears for our last machine of this feature. 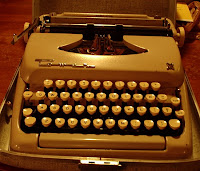 Tower Tabulator. Serial 5CT 440003T. Made for Sears, Roebuck & Co. by Smith-Corona. If the serial for this machine is also in line with Smith-Corona's production of its own machines, then it dates to 1959. Note the radically different look given this machine through use of a smooth finished paint, and the large chromed logo. What is interesting is that this machine has a serial that runs in the Clipper serial number range, and like the Clippers this machine has the 42-key keyboard and no paper support arms.. but it DOES have a tabulator, albeit a manually-set one. It is interesting to see, in addition, that the serial numbers for the Silent stop in 1957. It would appear that the construction features were blurred between the former Silent and Clipper, and the Silent serial number range ended. This is educated speculating, and more investigation is needed on this sequencing. However, we're on it and the results will continue to appear here.

That's it for our meandering through the Smith-Coronas for this evening. But keep looking back for MANY more!
Posted by Will Davis at 5:22 PM