by Will Davis with assistance from Thomas Furtig

Recently, I was very excited to acquire a machine I felt sure I'd never seen before. This machine is clearly labeled as a Japy, but upon a bit of checking I quickly realized it isn't a Japy at all .. at least, that's not who made it. 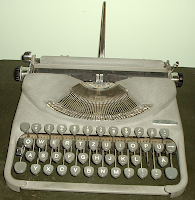 JAPY portable, no model indicated. Serial number 511648. Will Davis collection. At left we see the machine in question; I myself, not owning a Gromina didn't recognize it at first but after having e-mailed Thomas Furtig I discovered that this is what it was. I quickly went searching in my array of machines for that later, very attractive Groma Kolibri I knew I had and waited for Thomas to tell me where to find the serial number. He did of course, and also sent along some observations and some photos of his early Groma Gromina. Let's take a look briefly at that machine -- which is in the earliest decor -- to see the root design and then we'll get on to what this odd relabeling might be all about. 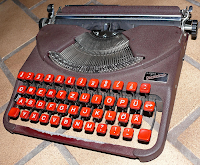 Groma Gromina / serial number 503409 / Thomas Furtig collection. The serial numbers for the little flat Gromina begin right at 500000 in 1951 so that Thomas' machine is indeed very early. Thomas points out that the square red keytops are the first style, and that he also owns another one with the same keytops having serial number 504322 (although that machine is grey crinkle paint.) These machines are incredibly flat -- certainly in the Rooy class of vertical space. However, what is interesting is that the internal design is not any special piece of engineering in terms of tricky design to achieve the flat size envelope. The parts are just plain tiny. The machines employ primary key levers that all head from keytop toward the centerline and which end underneath the segment. Short links take the motion from the key levers to small intermediate rocker arms which directly drive the type bars on the opposite end of the first link by way of a gear tooth design very similar to that used in many Remington and Imperial portables. The amazing thing is not the design itself, but the miniaturization of the parts and the precision of manufacture. 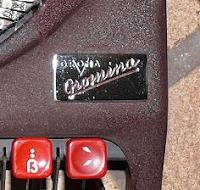 At left, we see the burnished metal label plate applied to the top right of Thomas' Gromina. It appears that the little flat Gromina was not produced in what we might think of as vast numbers judging by available serial number records, even though flat typewriters were definitely in vogue in the 1950's. By the end of 1953 only 8000 machines had been produced.

While the official serial number records available seem to end short and are sparse, Thomas Furtig has informed me that the Gromina ran through two distinct forms -- the second looking much more like the later Kolibri than the first kind -- with the Kolibri beginning production at a serial number in the middle of the 500,000 range.

That takes care of a quick briefing on the root machine, the Gromina. Let's take a look now at the actual newly discovered Japy machine again and place it in some context. 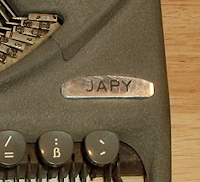 Here for comparison to the label plate affixed to Thomas' Gromina is the label plate affixed to the newly found Japy, serial 511648. Let's note the shift to grey keytops on this machine with the body finished in grey crinkle paint; we can limit the change in keytops at least to between serial numbers 504322-511648. No other changes are apparent. This machine also matches one on the Elsters' site with a serial number of 511692.

Why was Japy, a well known maker in France, importing and selling the little Gromina with its own name on it? One has to wonder if German-made machines weren't somewhat unpopular in the immediate post-war era which might have led to attempts by German makers to get their machines relabeled for sale in France. Many German machines of almost all makes were relabeled in the post-war era at some point.

What would this machine have competed directly with in France? In other words, did Japy have a market niche that needed to be filled by a small, flat typewriter?

Absolutely it did. These were the days when the Rooy Portable was being sold - itself one of the most innovatively designed and manufactured flat machines of all time, and the only machine on the market whose case (or enclosure, if you prefer) was totally integral with the typewriter. This one feature is really the heart of the whole Rooy design -- the inventor, Borel, states this clearly in his voluminous patent material -- and this deliberate integration of typewriter and case which leads to (supposedly) the ultimate convenience in operation and storage is what makes the Rooy Portable my designated "Holy Grail" of portables. It is in essence the final developmental concept - tried only once. Surely, even if experienced typewriter men were not completely won over by the design and execution of the Rooy Portable they'd have realized that to concede the small flat machine field would have been damaging. Japy had no such machine in house; surely the Gromina, relabeled for Japy, would fit the bill.

Above we see the Japy relabeled version of the Gromina, dated to later than 1954 on the left. On the right is the larger Japy portable of the 50's in green crinkle paint. This machine is serial number 166216F and dates to roughly 1953. (I think the "F" might indicate French keyboard, which this machine has.) We can see how much smaller the newly found Japy is than the Japy portable (probably the model P18 in point of fact, by serial number records but also possibly called the Japy Personelle) and it's clear that this one-two combination is exactly that fielded for many years by Paillard (Hermes)and L.C. Smith & Corona / Smith-Corona. It is sheer luck that these two are so close in date. I'm sure everyone recognizes the machine on the right as belonging to the later Euro-Portable family design produced in many places over the years.

Thomas tells me that he's never seen another machine like the little Japy. Unfortunately we cannot perform any further identification on the machine other than the brand and the serial number because the thin long plate on the rear is totally missing from the machine. On the Gromina, it carries the manufacturer's name. We will have to wait until either another machine turns up like this one, or else some sort of advertisement or catalog appears showing the machine in Japy trim.

As a point of interest, I've placed my Groma Kolibri, serial number 603607 next to the Japy for a size comparison. The Groma Kolibri is a whole generation more refined, you might say, even including parallel key action and many improved details and features.

And that's it! We don't know anything more about this little Japy, which Thomas described as scarce. We'll certainly be on the lookout for any further information and if there is any to be had, you'll see it here.