Many of us like to keep track - well, try to anyway - of the various Underwood labeled machines (and Olivetti-Underwood, and Underwood-Olivetti) that correspond to various other models produced by Olivetti, just for reference. That is, except for the Underwood 250 series machines which were made in Japan by Silver-Seiko, for reasons we don't know. 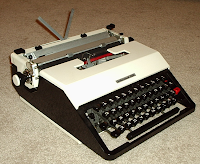 Here's a very attractive one. This is an UNDERWOOD 450, and it's probably no accident vis a vis the model number that it correlates to the Olivetti Studio 45. Look here for our European Typewriter Project page on Olivetti portables. The serial number makes us think that this machine was made in 1972, if it runs in with the Studio 45 machines.. and there's no reason at this moment to suspect otherwise. This machine has a nice crisp action, lever set tab stops, great keytops and a fantastic two-tone black and white color scheme that I myself just love. I do have a Studio 45, and I can tell you that visually this Underwood labeled machine is much, much more appealing. So if you're looking for an Olivetti machine out there, keep aware that there may be an alternate decor and/or brand out there and see if you can't find the machine you want, but done just a bit better!
Posted by Will Davis at 2:26 PM 1 comment:

Original OLYMPIA vinyl window cling, obtained at closure of Baker Typewriter Company, Elyria Ohio some years back. I got the best stuff - George Baker's Royal Line Book, an Olivetti-Underwood dealer book, a number of other things paper wise and this very cute window sticker. I've never shown it until now. Click to get a larger view!
Posted by Will Davis at 1:48 PM 2 comments:

Email ThisBlogThis!Share to TwitterShare to FacebookShare to Pinterest
Labels: olympia 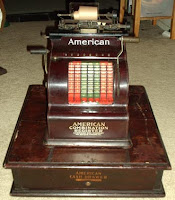 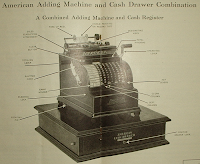 In any event, the American Combination Register is now NOT the only indication of its own existence, which is quite gratifying to us.
Posted by Will Davis at 1:14 PM 7 comments:

I'll TELL YA' what's wrong with this thing!!

Hi again everyone!! We were pleasantly surprised by all the responses to this feature! Really better than we had hoped. Thanks to everyone that posted an answer, AND to all those who viewed the blog and are awaiting the "solution"

But first, since I have your attention, I'd like to begin with this brief analysis of the preamble to the Constitution. HAHAHAHA no not really.

Essentially almost all of the guesses from first to last were correct! Here is our "response" to whats wrong with it, in the order that we noticed these things when we first saw this very machine, and then bought it.

First off, it is VERY VERY unusual to have a machine this late with only 42 keys. Really, by this time virtually ALL large portables, heck almost ALL portables PERIOD had 44 keys. This machine is way too recent to have only 42 keys. Notice that is identical to any other contemporary SCM machine, except for missing those two keys. Heck, even the shield behind the keys through which the key levers pass is clearly made for only 42 keys. So that's the FIRST thing we noticed.

Lets cover WHY that is first. Yep, this is indeed a LARGE TYPE FACE machine, and because the slugs are so big, there isnt room for the two other keys! Note that the segment is also only machined for 42 keys, if you can see that in the pic! If not, trust me. It is. Really. This is actually a large type face machine intended for primary education!

The other give-away was also guessed correctly, the scale numbers. These clearly indicate a larger type face, so that guess was correct too! In SCM machines, a large type face PRECLUDES use of a rapid space key too, by the way.

Also guessed correctly was the variation in shifted symbols on the number keys. A division symbol would certainly have been needed, and was provided in this "font" style.

The half space button is actually common on this particular generation of SCM machines, BUT it IS an uncommon feature, so that should get at least half credit for observational powers!!

Now for one wrong thing that is tiny, but cool. Remember that shield I mentioned behind the keys? Look again at the right side of it, adjacent to the correctly spotted only two position ribbon selector(yes, thats another wrong thing!! No black/red ribbon on one of these babies!!). If you look very closely you will see the characteristic 3 dimples that appear in this shield when used on earlier SCM SUPER-5 variants. The dimples would be colored in to identify ribbon selector position. Many machines of this era have this "left over" shield, and some Sears machines from this age still use only it, without the large plastic slider! BUT, this is one of the things that clearly indicates the SUPER-5 heritage of these late SCM GALAXIE machines. New body, yeah, but essentially a Super 5 inside!

So thats about it! We hope you enjoyed this, and we also hope you are looking forward to the next installment which will feature another machine with "something wrong" with it! (Its right over there across the room staring at me right now, and lemme tell ya this things MESSED UP!) AND HEY-- maybe you yourself have a machine that would be good for this feature, eh? Oh come on, strap on the miner's helmet, spray on the bug-b-gone, light the torch and go down to your basement and look around! See any machines in your vault that would do well in this feature? Let us know!! We would love to feature your machine here!! Gotta go now, UFO number 425 just parked and they want their large font machine back. Wouldn't you think that UFO-people would have something more sophisticated than ditto machines for primary education? Who cares, they brought more Chardonnay.
Posted by David A. Davis at 4:26 PM 2 comments:

What's wrong with this?

Time for something fun. We've all seen those pictures intended for children where something is wrong in them, and the goal is for the kids to find what it is. Then they circle it, and check the upside-down answer on page 78 or whatever. Well, this is kind of like that, only please do not attempt to actually circle anything with your over-sized HUSKY pencil, and don't turn your computer upside down to look for the answer.

Obviously, then, there is something wrong with this picture, more precisely with the TYPEWRITER shown in it. And NO, what's wrong with it is NOT that is doesn't work! (Come to think of it, that would have been good though...) Nope. It's something else.

We've all heard of, and likely taken, IQ tests. Meant to measure intelligence on a broader lever, these tests are still common in schools for estimating intelligence. BUT, there are OTHER kinds of intelligence. Anyone ever heard of EMOTIONAL IQ? Yes, there is such a thing. Apparently. Mines a 3. Is that good? Well, whatever.

This exercise is going to test your TYPEWRITER IQ. Yes, there is such a thing, if only because I just made it up. There!! So what is YOUR typewriter IQ? Well, try it out on this new, recurring feature. Post your ideas and/or comments and lets see who guesses correctly. Even if you aren't a machine "student" you certainly have a good chance of SEEING something, or SOME THINGS in this picture which ought to seem odd. No, I didn't photoshop it. No, we didn't manufacture it ourselves out of our huge rumored to exist warehouse of Smith-Corona machines and parts. (What a complete surprise that it's an S/C/M machine, eh?) No, it wasn't delivered last night on the regular UFO shipment, that one only brings typing paper and crystal meth. And Chardonnay. Don't ask.

So have at it! Look over this machine which most if not all collectors wouldn't even give a second glance, and POST what it is you note!! Or, just keep it in mind and look for the answer, which we will post up early next week. Have fun!!
Posted by David A. Davis at 4:30 PM 13 comments: