We've put up another video - generally concerning the Visigraph, but exploring the difference between segment mounted type bars and individual type bar bearings.  We compare the Visigraph to some other early machines.

There's bonus footage included, of a machine and device we haven't shown before -- a Brother JP-3 series machine and the rare Dial-A-Type changeable type head. 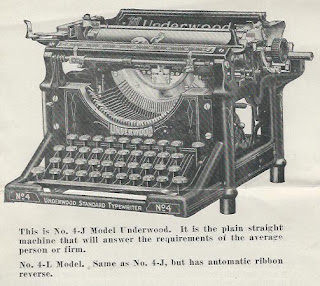 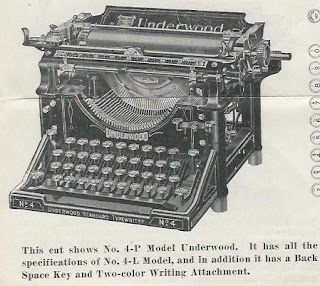 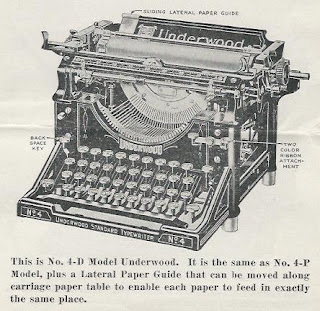 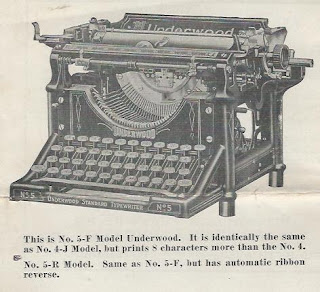 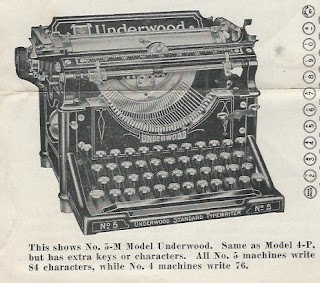 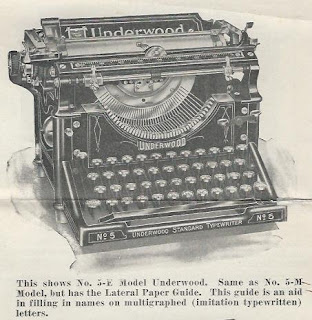 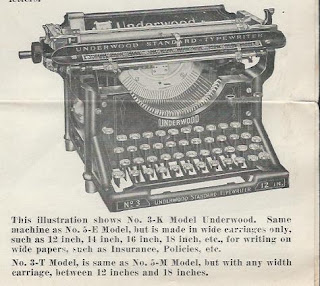 What we're pretty clearly seeing here is that this rebuilder (clearly stated as such) is offering a range of ages of Underwood typewriters of each model (3, 4 and 5) and that they have varied features --- with more appearing as time goes on.  The machines are mixed up in the booklet, which is why I've clipped the scans and placed them in order.  So that we can make sense of these things, here's a brief summation of the codes from this booklet.
No. 4-J  76 character machine
No. 4-L  adds auto ribbon reverse
No. 4-P  adds back spacer and two-color ribbon selector
No. 4-D  adds lateral paper guide
No. 5-F  84 character machine
No. 5-R  adds auto ribbon reverse
No. 5-M  adds back spacer and two-color ribbon selector
No. 5-E   adds lateral paper guide
No. 3-T  has all features of 5-M but wide carriages
No. 3-K  has all features of 5-E but wide carriages
We can try to zero in on the age range of the machines you've seen using other evidence.  For example, we know they're all post-1900.  Also, note that none of the machines you've just seen (except for the 3-K) has a shift lock key on the right side of the keyboard; they're thus all pre-1915 (or so) when that feature was added... again, except for the 3-K.
The OMEF serial list, looking at the No. 5 model, says that back space and bichrome ribbon began on that model at about serial 245,000, or in the 1908-1914 time range.  Looking at tw-db.com we see that these features are listed on the No. 3 as having been added in 1909 - so that's a good solid guess for the No. 5 to have added the back space and two-color ribbon as well.  This then places the 4-P, the 5-M and the 3-T starting in 1909.
The brochure, as noted, is from about 1918.  Right now, it doesn't look as if it matches up properly with the groups from the rebuild manual - the rebuild manual's K groups are placed by serial well after the print date of this brochure.  What we do now have though is a couple of solid pieces of evidence that, internally, Underwood was referring to changes in features by letters suffixed to the model number of the typewriters; it remains to be seen if we will ever be able to find a complete listing of such codes.
Let us know, in the comments, if you have anything to add to this code mystery!
5:20 PM  9/11/2013
Posted by Will Davis at 2:23 PM 37 comments:

We've decided that it would be fun and interesting to try some experimental videos detailing some of the work we do on various things, which naturally includes typewriters.

The first video, which is a short six minute look at the Visigraph, can be found at the following link:

We hope you enjoy this; it's the first time we've done anything like this, and it was kind of fun to do.  So, if it keeps being fun, and if people enjoy them, we'll keep going.

There is now a link to the YouTube channel in the right sidebar of this site.  There will be other videos on there than typewriters, but we'll post here when typewriter videos go up.