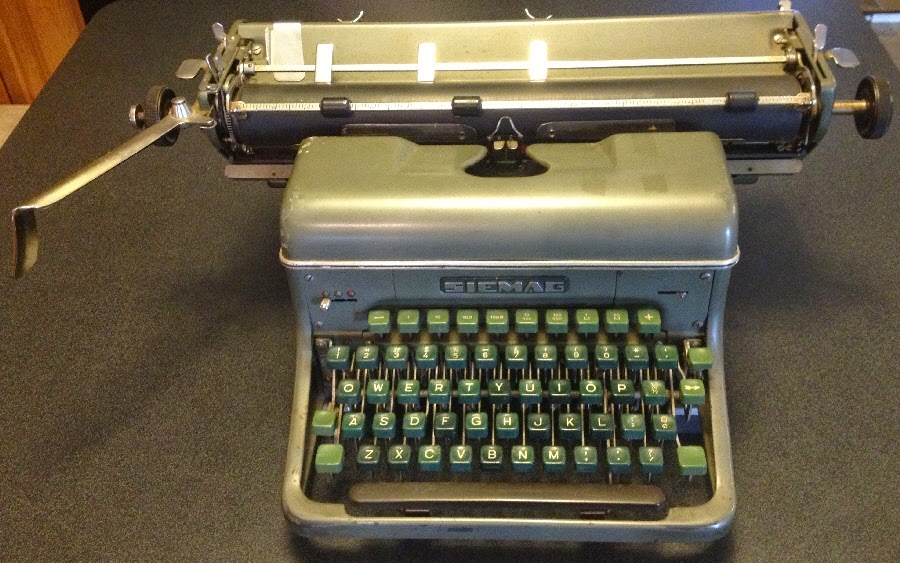 We recently had the good fortune to spot, win, and actually pick up the typewriter you're about to see.  This is one of those machines that until now, anyway, was mentioned in some collector materials but not shown in detail.  The machine is the "Signature," manufactured for only about seven months during 1949 by Woodstock Typewriter Company. 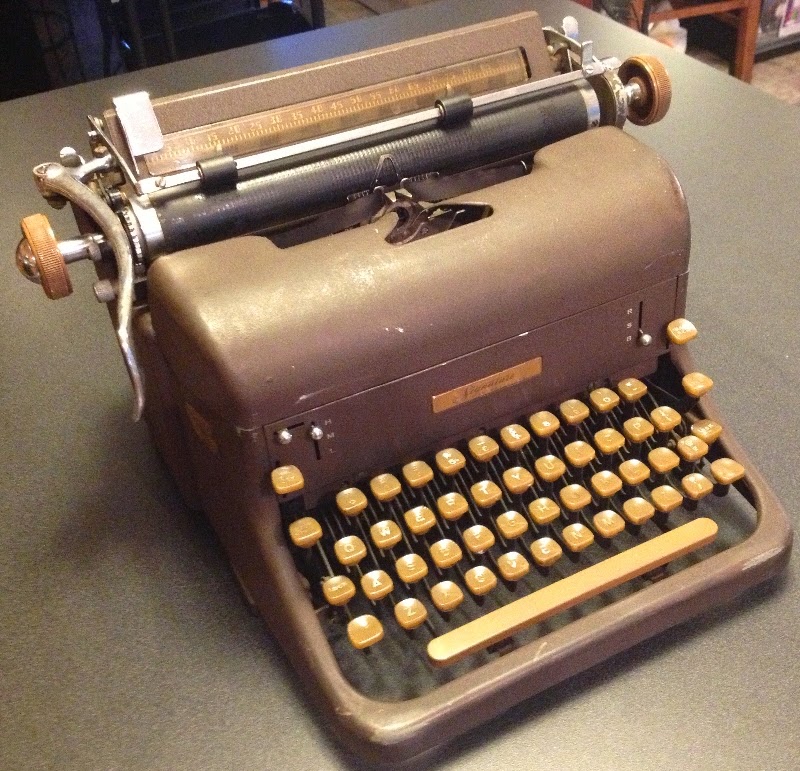 This machine represents a significant departure from the previous post-war Woodstocks, which themselves had already changed significantly once post-war.  After the Second World War Woodstock continued manufacturing its regular standard machine (which had been built throughout the war for the Government) in overall crinkle black, as prior.  In 1947, the machine was altered to segment shift by incorporation of a completely new and different key lever / type bar mechanism that perfectly retained the inherent speed characteristics of all prior Woodstock machines.  In that same year, Sears Roebuck & Co. sold its interest in Woodstock Typewriter Company to Century America Corporation.
Century America changed nothing immediately - but in May, 1949 the machine you now see here appeared.  The body style outside was changed everywhere, and an overall color scheme of brown and tan was applied.
﻿ 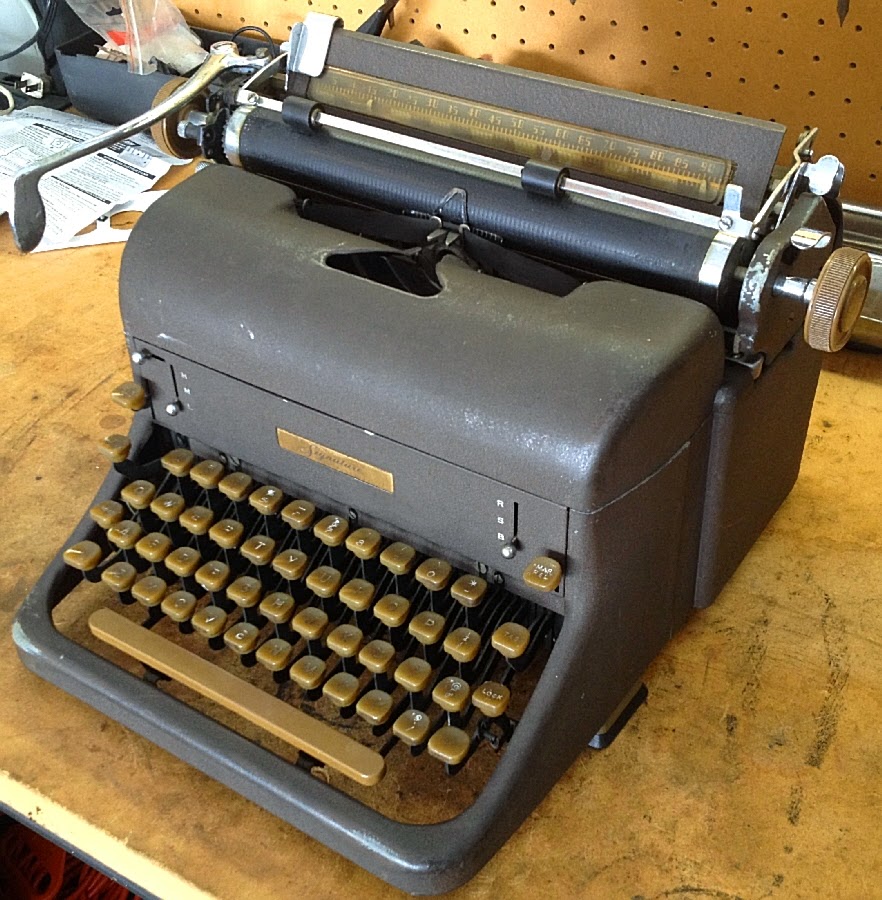 The marketing of this machine was completely unique among not only standard typewriters of the day, but also among all standard typewriters ever built.  You can click here to see a short YouTube video we did showing this marketing feature, and some of the features common to Woodstock typewriters that make them the favorites of some typists.  The typewriter was said, in advertising. to "sell itself on sight because it's personalized!"
The serial number of the example you see here is N1060765, and information that came with it shows a date of December 7, 1949.  That date correlates well with a corrected tabulation of Woodstock and R.C. Allen serial numbers, which in some lists are quite a bit off.
In November, 1949 the newly formed R.C. Allen Business Machines Inc. (itself formed only in March, 1949 by merger of several affiliated businesses Allen himself was involved with) announced it had purchased the Woodstock Typewriter Company, with all rights and good will.  After an initial announcement that production would be moved to the Allen plant at Grand Rapids, Michigan, the decision was made later not to move the production, and it never did move.
Considering that this machine dates roughly to the last month of 1949, and that R.C. Allen labeled machines began rolling off the assembly line at the factory or or about January 17, 1950, this is certainly among the very last Woodstock typewriters ever made.  I should quickly note however that R.C. Allen continued in production at the same plant with successive models through 1970. 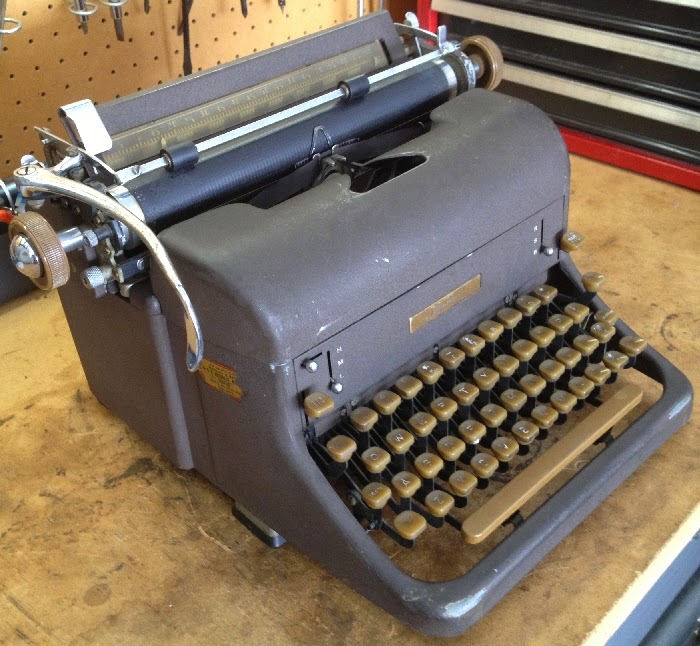 What seems obvious now is that there really is, and has been, quite a tendency to ignore Woodstock machines on the internet and among collectors (outside of my now nearly defunct website pages on 'visible typewriters.')  We are prepared to rectify that shortly, with a large article in the works right now showing literally every Woodstock variant from the start to the end, and the R.C. Allen variants as well.  Our good friend Thomas Furtig has supplied photos from his collection, and we have several machines of both makes ourselves as well as paperwork to throw in.  That post will be coming up shortly (within a week or two) following the acquisition of a couple more key pieces of information.
So, keep an eye on this blog for that big article / photo montage.  I think it's exciting that there is such an unusual variant stuck right in the middle of the history of the two related product lines, so to speak, and I'm fascinated by it.  It's also a wonderful typewriter of course - as are all Woodstock and R.C. Allen machines. 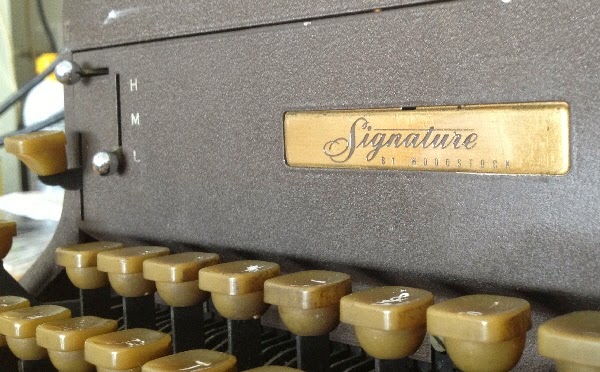 One final point, for now - it has not been lost on me that the December date, and personalized nature of the machine (which you'll see in the video) might well indicate that this machine was a Christmas present ... which makes it all the more fitting that we found it now, and are posting about it now.
•YouTube video showing this typewriter's incredibly unique feature, and some operation.
6:30 PM 12/2/2014﻿
﻿
﻿
Posted by Will Davis at 3:25 PM 11 comments: