A recent discussion on one of the many online typewriter forums has triggered a quick but careful look into some manufacturer (and other) materials in order to obtain the best and most accurate view of what the industry actually used as terminology when referring to the type on a typewriter; this paper, published on the Davis Typewriter Works blog, is the result.

The aforementioned discussion centered primarily around the various different styles of print which were available from the manufacturers.

Without looking at any materials, those familiar with typewriters can probably easily define the term "type."  "Type" is a component of a typewriting machine that presses upon the ribbon (in a ribbon typewriter) or directly on the paper (in a direct inking typewriter) to make the desired final impression.  Type may be driven to the printing point in any number of ways.  The type may be manufactured as many small, unique components for a typewriter, each mounted on one instrument used to drive it to the print point or in some special designs all the characters may be mounted on one single unit such as a cylinder shaped component, a sleeve, a half-circular component, or others.  In a very few typewriters (such as the Merritt) the type are not firmly mounted at all, but lie in a tray and are motivated individually when required.

Collectors and technicians all use this term generally, and frequently.  For example; "If you're not careful and you keep typing unevenly and clashing type bars together you might damage the type."  Or, "Once a week the typist must clean the type thoroughly with one of the approved cleaning preparations listed in the back of this manual."

The problem in terminology for modern collectors has arisen because the tendency for people today is to use a word such as "font" in describing the varied kinds of print shapes and forms available.. which was never in general use at all regarding typewriters.  The term DID appear late in the era, but in a very special application that we'll see later.  For the rest of the time, and rest of the universe, no typewriter materials (be it from the sales or the manufacturing standpoint) use the term "font."  We must then support the use of the proper terms by evidence in the literature, as it is our purpose not to invent a history that did not exist but instead to properly represent the one that did - a process only possible through taking time to come into possession of the facts.

To this end, I conducted a study of the literature at hand and will detail the results below.

1.  Century of the Typewriter, Wilfred Beeching (1990 edition.)  This book, nominally for collectors, is a rich and detailed account written by someone actually in the business.  Thus, it is likely to contain accurate information - particularly where direct involvement of the manufacturers is in evidence.  It is the only "collector book" that details the vagaries of printing styles.

This book has a section "Type and Type Styles" beginning p. 78.  This section uses the term "type" in a general fashion as defined earlier in this paper.  When the section begins to display the varied forms of final print that were optionally available the header is "Range of typefaces."  This brings up the most commonly used term to describe the varied final forms of print - "type face" or else "typeface" as one word.

The term "type face" is in fact also that term which this writer personally has heard all typewriter mechanics and dealers use in describing the varied styles and sizes optionally available on typewriters.

The Royal Line Book and the Olivetti-Underwood Dealer Guide were consulted to obtain the terms used to offer varied print forms to the customers.  The leading pages of both manuals are shown below. 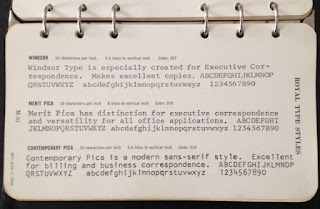 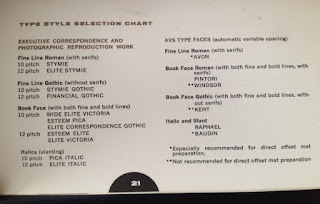 Both of these early - mid 1960's manuals use the term "type style" to differentiate between the varied forms of print available.  Note that the Royal Line Book shows them, but that the Olivetti-Underwood would require a separate stand-alone guide (Smith-Corona materials were also printed this way.)

The trade catalog for a typewriter with large interchangeable units was consulted first.  This catalog is for the Reliance Visible, which incorporated an entire "action unit" of sorts that contained the key levers, type bars and thus of course the type.  Different styles were available as were different language keyboards.  The page to describe these interchangeable action units (interchangeable ONLY on machines of the same pitch, or that is to say which typed the same number of characters per inch) is reproduced below. 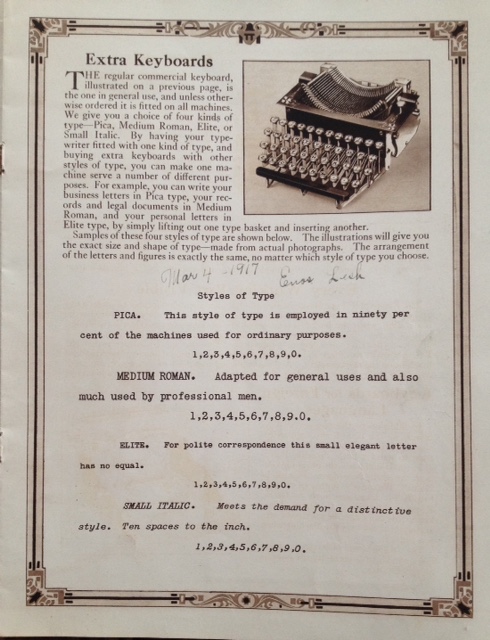 Again, we can see the general application of the term "type" in this document, as can we also see the use of the word "style" in reference to the varied forms of print available.

Another early typewriter on which the type were more or less removable as a unit (but without any of the mechanism of the typewriter coming with it) was the Hammond.  A Hammond Multiplex instruction manual is in our collection - a photocopy provided by Peter Weil some years ago.  In this document the familiar half-round elements which carry the characters to be printed are described under the dual heading "The Type Shuttle or Type Plate."  Throughout the rest of the document however the term "type shuttle" appears exclusively.  For optional type shuttles the reader is directed to the "Type Catalog."  A contemporary advertisement, also from Weil, provided at the same time uses the term "styles of type" to discern the varied forms of print available.  Thus, even with the added nonstandard terms the company still used the word "style" as one would expect, given the previous materials.

We will read again about the Hammond and its descendant shortly. 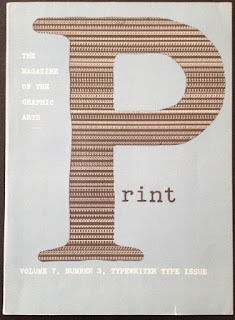 "Print - The Magazine of the Graphic Arts" produced a special technical and historical issue devoted entirely to typewriter type in June 1952 (Print, Volume 7, Number 3.)  This document was written directly with industry input.

First, in its whole this publication supports and uses the general term "type" as described earlier.  The term appears over a dozen times used generally in this way in various sections of the publication.

Attention is called to the "Special Uses" section on page 30: 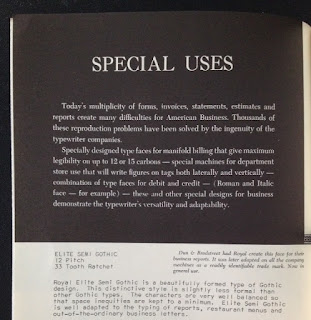 Once again, as with the Royal Line Book above (and of course many others) we see an assortment of varied forms of print, but in this case instead of being termed wholly as "type style" this publication throughout uses the term "type face."  In point of fact, in the detailed section on the manufacture of typewriter type and the actual creation of the type itself the term "type face" also appears when describing the formation of the characters on the type itself.

In general use, the terms "type face" (or, "typeface") and "type style" appear synonymous.  Both "type face" and "type style" are used to describe the varied different forms that the final print can assume.  This is fixed on a normal typewriter; is changeable on a typewriter whose printing instrumentalities are such that the type, whether with or without considerable part of the mechanism, can be removed or interchanged.  (Again, while typeface / type style are changeable on such machines, normally pitch or characters-per-inch is not.)

Actual dealers and mechanics, as well as Beeching and the special issue of PRINT have displayed use of the term "type face" / "typeface" in description of the varied available print forms.  The dealer and manufacturer materials shown above have used the term "type style."

It seems entirely likely, sifting and analyzing the materials, that the actual, proper term for the varied optional shapes and forms of final printed characters should be "type styles."  The term "type face" or "typeface" is a common, more comfortable or familiar type of term that may well be a simple and later-on widely established misuse of the proper term "type face" referring to the face of the type, given that it is used, it would appear, more by dealers and not the makers.  It is clear from the literature however that even if originally technically incorrect the term "type face" or "typeface" as a synonym for "type style" came into general use in the era of the typewriter.  In other words, if one said to a dealer or mechanic "I was wondering if I could change the typeface on this machine" instead of saying "I was wondering if I could change the type style on this machine," one would be just as easily and immediately understood.

Speaking specifically about the design, fabrication, cleaning or even damaging of that part of the type on which the actual printing characters are cast or embossed, the term "type face" is used as a short hand for "the face of the type."

(It should be mentioned here that the well known industry term for the type, manufactured for a conventional typewriter and normally soldered onto the type bars, is "type slug" for each individual component of the type.  Thus, the "type face" is the platen-facing portion of a type slug.)

It is reasonably established, thus, that the varied styles of print are referred to either as "type styles" or as "typefaces" / "type faces", in the interest of historical accuracy; the former probably being the correct 'inside' industry term and the second a popular colloquialization or misappropriation of another term that took hold and spread widely in the business.

Addendum 1: The term "Font," its use and misuse.

It has been pointed out by Brian Brumfield that the Vari-Typer, a somewhat convoluted descendant of the Hammond mentioned above, used the term "font" for describing what we see above as typeface or type style.  This is mentioned also in the PRINT magazine, which clearly describes the use of the term "font" specifically in relation to what formerly had been called a type shuttle.  This is a specific and unusual occurrence, and as we can see the term has been found nowhere else in the literature so far in reference to another machine.  Thus, it is true that the term "font" would be correct in referring to the changeable type in a Vari-Typer, but is a historic inaccuracy if applied to any other older machine (and of course to most newer ones.)  The term "font" appears nowhere in the magazine other than in reference to the Vari-Typer.

[The progression, for purpose of explanation, from the earlier to the later brands is as follows:

The Hammond concern's patents were willed to the Metropolitan Museum of Art in 1913 when the original inventor, J. C. Hammond, died.  According to PRINT's short history the machine's rights and the patents were bought from the Metropolitan (no date given) by the Frederick Hepburn Company which is the concern that renamed the machine "The Vari-Typer."  This company went bankrupt and was bought out in 1933 by a group of investors headed by Ralph C. Coxhead.  The redesigned machine (now with a metal type font instead of Bakelite) and with some 3000 changes overall was re-introduced to the market under the same brand name in 1937.  The concern's growth was slow until, the magazine reports, a strike at Chicago newspapers started in 1947.  Reportedly "Until the strike's end two years later" the people of Chicago read newspapers set up on the Vari-Typer, which became known to the industry and pushed the machine to the later heights of "Cold type" printing.  It could be easily surmised that the wide use of the term "font" in place of what had been the term "type style" during the typewriter era came up during the age of the dominance of the Vari-Typer in printing.]

The use of the term "font" applies to computers today, and essentially is duplicative of the Vari-Typer in that the operator can change the whole printing appearance at once.  The term "font" appears nowhere else in reference to conventional typewriters or typewriters with interchangeable units in the literature, and thus is misapplied and perhaps even anachronistic (given the dates above) when used to describe type style on the wide range of conventionally manufactured typewriters.
DAVIS TYPEWRITER WORKS  3/25/2016