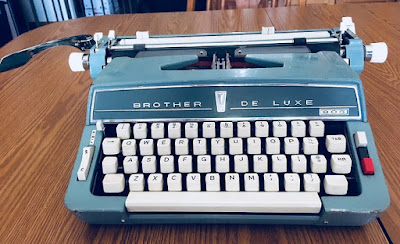 (This series of machine first appeared on Will's portable typewriter websites over fifteen years ago, and a detailed article on the large Brother portables appeared under both of our names in the December 2012 issue - Issue #100 - of ETCetera, which is available here.  This article puts the large Brother machine in perspective, and describes variants likely to be found in the field.)

Although Brother (a sewing machine manufacturer located in Nagoya, Japan) began investigating the manufacture of portable typewriters as early as 1954, it was not until 1961 that the company brought its first model to market.  This was a fairly small carriage shifted model, well made and sold at a very competitive price.

This initial entry into the typewriter market was brought about through inquiry by Western Auto, whose Western Auto Department Stores were already selling sewing machines manufactured by Brother.  Western Auto began selling these machines under its "Wizard" brand name; two are shown here for interest.

While sales of this model, known internally as the JP-1, provided the basis for Brother's entry, the company broadened its range by adding two further models to the market in 1965 which were related to each other.  These were the electro-mechanical JP-2 and the fully manual JP-3 models.  While the electric model did not sell well (as judged by surviving numbers and advertisements) the manual machine did somewhat better... although it still did not last more than perhaps seven or eight years in production.

The new machine differed considerably from the earlier model.  It was much larger, incorporated segment shift instead of carriage shift, and incorporated parallel key action like the 5 and 6 series Smith-Corona portables, the East German ERIKA, and the small East German GROMA machine in the flat category.  The price of the machine at retail however was noticeably lower than the big Smith-Corona and Royal portables, giving the machine a niche.  In the United States, the JP-3 was sold most widely by department store / catalog retailer Montgomery-Ward, and it is that store's brand which appears on the very early machine seen next. 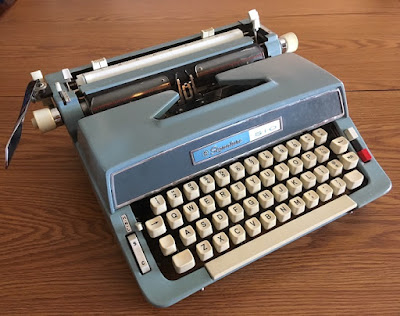 The machine seen above is a 1965 Montgomery-Ward Signature 510.  The JP-3 is immediately identifiable by the combination of the blocky, squarish keytops and the three-button ribbon selector to the right of the keyboard.  The tab set-clear rocker to the left of the keyboard is notable, as is the high speed paper feed lever on the right end of the carriage.  This machine does not have a paper bail; Brother considered its new setup on this machine to be its "Advanced Paper Handling System" which did not require a bail.  Probably to meet competitive standard or critique, a bail did appear on many variants soon after production began. 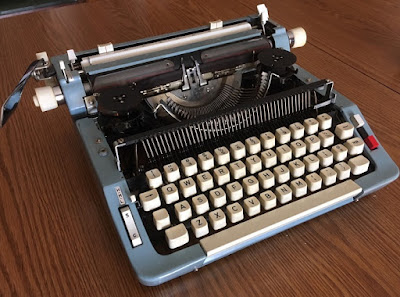 With the top cover removed, another immediately obvious characteristic of the JP-3 series is seen here; the type bar springs connected to a spring rack that runs across the front of the machine, above the multi-link key lever mechanisms and which provides return pressure for the key levers and type bars.  The typing action on these machines is stiffer than on others of the same general size with similar action (Smith-Corona, Erika) but is very pleasant.  These machines are comfortably fast to run with the touch regulator set high.

Above is the serial number plate from the rear of the Signature 510.  Note that in Brother fashion the first digit of the serial is the last digit of the year of manufacture.  However, Montgomery-Ward machines incorporate the year of manufacture reversed in front of the serial.  Look at the labeling "56 - SER. NO." and you will note that the digits for 1965 are there, reversed, as "56."   The actual stock / catalog model number of the machine is also seen - EBK 8130A.

For collectors, typists and historians there are two general variations on this line that may be of interest.  Namely, these machines were available at times with wider than normal carriages, and with interchangeable type elements.  We will examine these separately. 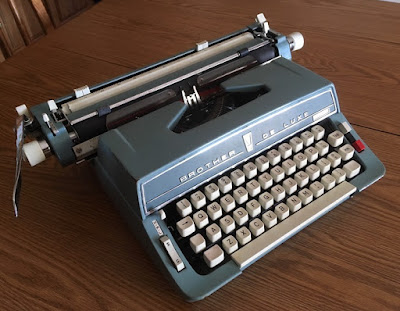 Wide-carriage JP-3 machines are instantly recognizable because of their wider carrying cases, although it takes some exposure to the two sizes to spot one immediately in the field.  Seen here is a Brother De Luxe 905, which was manufactured in 1966.  Most Brother machines were, at this time, sold in the United States by department stores - and the majority of that was Montgomery-Ward and Western Auto.  In 1965 the company also made a deal with Sperry-Rand Remington to relabel machines for that company, to be sold by it world-wide.  A number of Brother machines were also sold by other means, such as catalogues mailed to homes (the Spiegel catalog was one.)  Very few of its sales during these years were to, or through, office machine dealers. Thus, we at least know that the machine above was one of the relatively smaller subset sold some other way than by department stores.

Above, the back plate on the Brother De Luxe 905.  Note that this is the earliest style of Brother serial number plate you'll find on a JP-3. 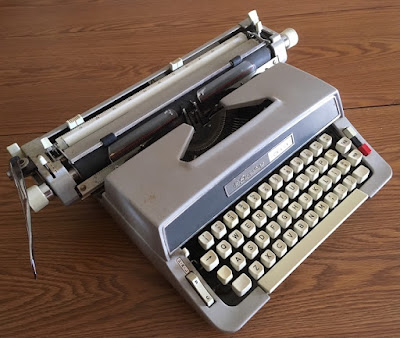 Seen next is a 1966 Montgomery-Ward Signature 513.  This machine had a wider carriage than the 510 seen earlier, and added a paper bail.

The rear plate for the Signature 513 shows the same overall style as that seen on the 510, with the date encoded (simply reversed) and of course the differing specific data.  At this time Ward's was issuing a common instruction manual labeled "Models 510-513" for these, not shown.

Earlier we used the term "element" to describe the interchangeable type on Brother JP-3 machines.  This is because the machines came from the factory with a type slug fitted on a special type bar, which was to be replaced with a cylindrical rotating "type sleeve" style element known by the Brother name of "Dial-A-Type."  We will see two machines here; one in original condition and one with the new element fitted. 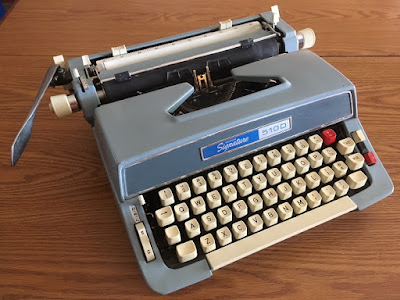 Here we see a 1971 Montgomery-Ward Signature 510D.  The "D" in the model calls out the interchangeable type feature and the red keytop is immediately noticeable in the keyboard. 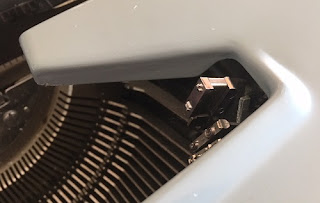 The removable type slug is very easily seen here - as is the spacing of the type bar for this element in the segment, which has a considerable un-machined gap between the farthest right type bar for the replaceable element and the next one. 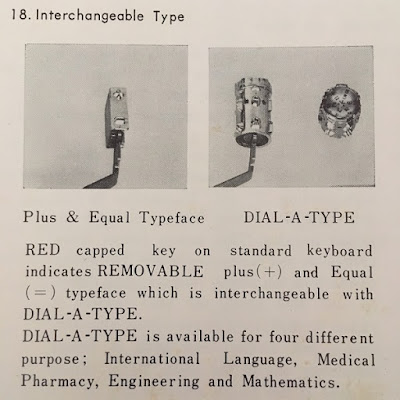 The owner's manual for the 510D clearly displays both the originally fitted, removable type slug and the optional Dial-A-Type element.  This element literally is rotated to obtain one of several pairs of symbols or figures, and four optional elements were available as spelled out here.

Above, serial plate on the 1971 Montgomery-Ward Signature 510D.  Note the changes from the earlier plates but also note retention of the curious date code in front of the number, digits reversed. 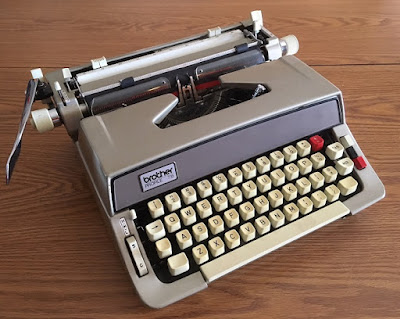 Now, we see a 1968 Brother Profile 715 which was found with the optional Dial-A-Type cylindrical type element installed.  This is a fairly unusual JP-3 labeling variant. 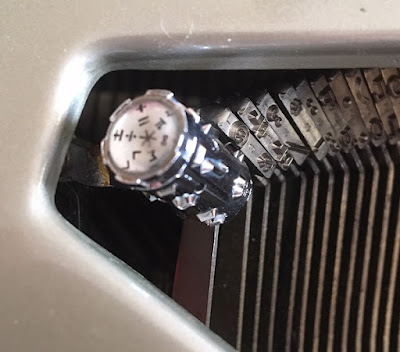 The Dial-A-Type element installed in the Brother Profile 715 is a Mathematics element.  These elements are relatively difficult to find; normally these JP-3 machines with interchangeable type are found in the field with the original type slug installed and no accompanying Dial-A-Type element - because the elements were sold separately.

Above, the rear plate on the Brother Profile 715.  The new style "brother" logo seen here was first used in 1968, so this example is also notable for being first-year in that respect. 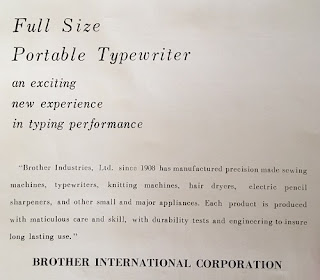 Finally, a clip from the Brother Profile 715 instruction book.  Brother referred to this larger manual portable as its "Full Size Portable Typewriter," which it clearly felt it needed in order to offer a fully competitive lineup.  What's also clear is that the JP-3 and its electrified near-twin the JP-2 didn't last too far into the 1970's; Brother came out with other models although the JP-1 soldiered on well into the 1980's.

Even if the big manual portable wasn't a lasting success, it did take part in a lineup that saw Brother rise from market entry in 1961 to selling over 500,000 portable typewriters per year by 1969.

Typists today would do well to look for one of these machines.  They are sturdy, with the same feel of precision that the first Brother model had but these add a "small office machine" feel and parallel key action, which some typists prefer for reduction of finger strain.  Their popularity continues to grow among writers which makes it somewhat unfortunate that the model didn't last longer.

(We have not shown all variants; some are just small variations of those seen here although a very new body style was introduced for JP-3 machines near the end.  Those can still be identified by the JP-3 spotting features easiest to use - which namely is the combination of a three-key ribbon selector on the right with a full keyboard, full featured portable having tallish, blocky keytops.)

Information in this article comes from the Davis Bros. archives and collection, from the US Federal Trade Commission, and from Wilfred Beeching's "Century of the Typewriter."