One of the more interesting items in my collection is a pair of sheets cut from a small (4.75" by 7.5") catalog which appears to have been a mail order catalog.  Three of the four sides of these two sheets contain advertisements for a special offering of rebuilt typewriters.

The original issuer of the catalog is unknown.  Conversation with Peter Weil produces no evidence from the pages which might give away the original catalog's publisher.

The date of the pages is certainly after about 1926, because the pages offer the Underwood Standard Four Bank Portable either brand new or rebuilt.  Indeed, it might be that 1927-1928 would be a good first guess for these.

We'll now show the pages, which are not numbered, in the order in which they most probably appeared in the catalog -- and then make some further commentary about the offerings. Click to enlarge the three images (separately.) 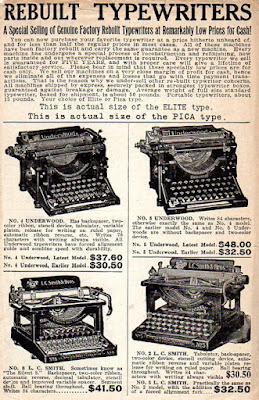 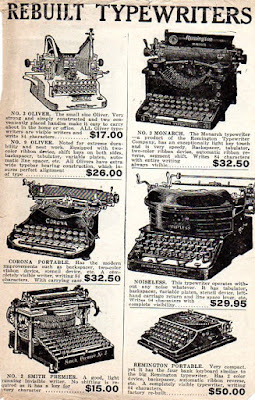 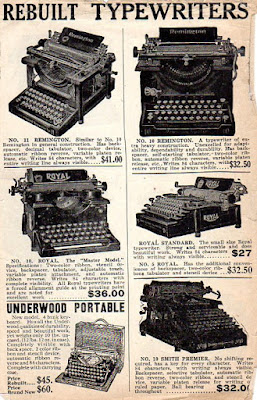 Not shown is the reverse of one of these pages, which advertises on its upper half a Ouija Board, and on its lower half a boxed selection of silk fabric scraps, for quilting or dressmaking.  These items have mail order numbers and a price by each.

The first page makes it clear that these machines are not sold on credit, and thus there is no machination required to protect against losing machines sent without full payment. Keeping in mind the date of this catalog is thought to be 1927-1929, let's look at the machines available.

Underwood No. 4 and No. 5:  These machines were in production at the time, but note that machines without backspace or two-color ribbon are available - these date to pre-1909.

Corona - this model is the widened frame type with right and left shift keys dating from later than 1922.

Remington portable -- This machine dates back as far as 1920, and the note here is the relatively high price for a rebuilt portable.

As we can see, while there are some typewriters in this offering that could include fairly new examples (the L.C. Smith No. 8 and the Underwood machines specifically, as well as the Underwood portable) most of the machines offered stood a chance of being quite old.  For a price comparison, keep in mind that new machines were still between $100 and $110 for the standard models (more for wide carriage) and that portables were still between $50 and $60 generally (note that the Underwood Four Bank is being sold at its going rate new, and cut rate rebuilt).  Here are the machines offered in the ad, in order of price, for comparison with these then-new prices.  All rebuilt except the first. 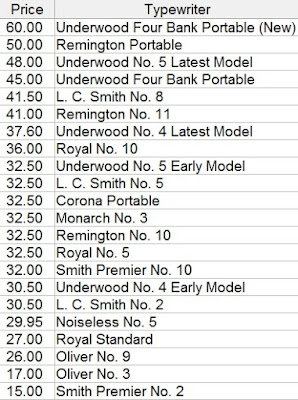 Taking a look now at the prices offered by whoever this was, we see the general mark of the rebuilt typewriter industry in that the latest available rebuilt models are roughly half the price of brand new typewriters.  Older models are still available, even examples that might be 20 or 30 years old, but are available at very deep discounts.

The companies that rebuilt typewriters put out ads offering to buy used typewriters- one of many ways they obtained machines.  Harry A. Smith advertised that he was interested in used typewriters "in lots from 10 to 100."  It is our guess that the prices these companies offered for used machines were at least as good as, if not better than, the trade-in value that might be obtained on the machines if they were traded against new ones.  This would be particularly true for a machine not being traded in on its original make (for example an Oliver being traded in on a Remington.)  Since the trade-in values were lower for non-same-brand makes it might well have made sense for an office manager to sell his office stock of machines to a rebuilder and get cash he could use to better discount brand new machines.  Or, if he wished to save even more money he could then turn around and buy rebuilt machines (we are aware of no trade-in allowance on rebuilt machines.)

The fact that these machines were, we suspect, purchased at or above the normal trade value on the market, and then sold being rebuilt at half the general price for new machines, points up the narrow margins on which this business model operated.  It also suggests why this particular seller has opted not to allow credit sales and is going for "cash only," considering that the country had pulled out of a bad recession in the early 1920's (although far worse was to come shortly.) 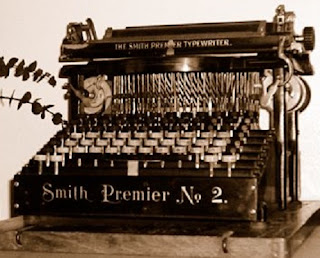 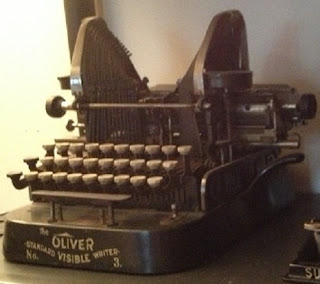 Above -- The Smith Premier No. 2 and the Oliver No. 3 both dated from the 1890's and were thoroughly obsolescent by the time this catalog was issued.  However, at roughly 15% of the price of a new standard machine these could have been attractive buys for the occasional user not interested in the latest features.  Will Davis / Davis Bros. collections.

Another purchaser at this time that we might imagine would be someone who needed to type at home, or perhaps in a local club or church -- say, for typing schedules or recipes, club notes or so forth.  Brand new portables were $50 or $60 at this time -- but as you can see from the price list a very solidly built, heavy standard typewriter could be had anywhere from $48.00 for a recent model down to just $15.00 for a totally outdated machine which would still have been completely adequate for many tasks such as suggested here.  This wide range of prices kept thoroughly outdated standard typewriters in circulation probably far longer than they would otherwise have been used or even considered.  It is not impossible that some standard machines were rebuilt twice, or perhaps three times, by professional outfits or dealers, given some of the age ranges we see in this advertisement.