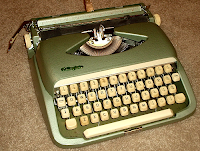 Just arrived here today, after an unopposed win on e-Bay is the COLLEGIATE, serial number 501963. I recognized the machine as some sort of variant of the ABC when I saw it on e-Bay (and that's "Cole-Steel" to those familiar with the variant normally seen here in the USA) and put in a large bid. The machine is different from all other ABC machines, and thus Cole-Steel machines in its exterior styling. A quick search of the European Patent Server produced lucky results; this styling was patented for use on the Koch's Adler ABC machine in 1960.

Here is a cropped view from one of the three drawing pages supporting the 1960 patent for Koch's.

This machine has 44 keys typing 88 characters, in an English keyboard format. Interestingly, the machine has no touch regulator and no ribbon selector and can thus be considered somewhat of a stripped model as compared with the other ABC / Cole-Steel machines normally found. The margin release doubles as a jam clear key, through use of a key lever extension that acts on the ribbon bail. As is clear in the photo, the Collegiate is in a very attractive "Hammertone" light green which is also found on the ABC / Cole-Steel. What differs is the casing in which the machine is contained. We have no data with the machine and have not on preliminary examination discovered any affiliation with the "Collegiate" name but will continue looking. It's very fulfilling to know that even at this late date there are yet-unseen and unidentified machines out there to find.
Posted by Will Davis at 6:22 PM