"Demise of the Typewriter - Recollections of the Queensland Era" 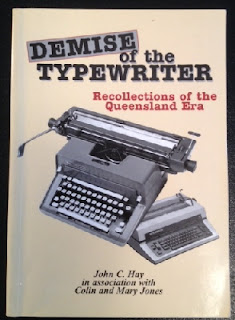 From the rear cover:

"This is a story of many stories about the typewriter trade in Queensland.  From the hardships of the Depression years in the 1930s to the boom period of the 1960s and 1970s, typewriters became a way of life for the tradespeople and business houses that served the industry.

But the writing was on the wall!  Within a few short years computers virtually made the typewriter redundant as digital technology took over.

The atmosphere and the characters of the trade disappeared along with the countless memories of a bygone era.  This is a story about that era and the demise of the typewriter."

This book was mailed to me by Brian Stevenson, of Australia, a friend who I met through membership in Nancy Sinatra's forum and with whom I've conversed many times.  Brian discovered this volume for a pittance in some resale shop or some other place and sent it to me as a surprise.  And what a surprise it was - a printed typewriter reference I'd never heard of until he sent it (which was over a year ago.)

This book is simply fantastic.  The authors decided some years back that, after the advent of the personal computer, the typewriter was doomed; having been in the typewriter business for many years, they made the decision with great foresight to collect as much information as was humanly possible before it was lost and assemble it into a book.  Thus, this book is filled with their first person accounts of decades in the office machine business, as well as the accounts of many others.

The accounts are amazing.  The rough and rugged stories of typewriter sales and repair almost literally on the old frontiers of Australia, and the transitional stories to modern times when assembled into this book provide a completely unparalleled narrative.  There simply are not words to describe how deeply inside the business this book's stories let the reader.

A late chapter in the book describes the transition of the typewriter from working tool and viable business product to odd interest and hobby.  A glossary, a large number of historic illustrations both of men and facilities in the Australian typewriter business plus advertisements, a reading list, and informational appendices round out this most worthwhile volume.

In this writer's opinion, this volume ranks among the top five most desirable books for collectors.  However, unfortunately, it appears that publication and sale was exceedingly limited.  I have not conducted a search in any meaningful way for further copies - but readers of this blog who have time and opportunity will surely want to track down other copies.  The book itself appears scarce.

I'm very grateful to Brian Stevenson for providing me this copy.  I would rate it a ten out of ten, and would suggest that the dedicated typewriter collector / researcher pay any widely reasonable price for a decent copy of the book.