•This material is condensed and reproduced from an article originally appearing on "Antique Typewriters by Will Davis - Visible Typewriters" which went online in 2006.  That site featured a two page article on the Fox later model "visible" machines.  To meet requirements for a visual primer on these models and to produce some insight on them, this shorter but updated article now appears. Because many of the original illustrations are used, most will not enlarge when clicked.• 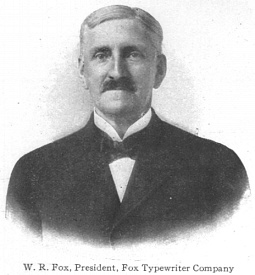 
William R. Fox's enterprise in manufacturing typewriters entered the field in 1898 with a largely conventional upstrike machine which quickly earned a reputation for ruggedness and speed.  The timing was a bit late, though, and today collectors do not find a large number of surviving Fox upstrike machines.  Much more plentiful are the "visible" Fox machines; this article provides an introduction and primer.

The Fox Visible machines were announced to the trade in February, 1906.  This was two years after the highly anticipated and well heralded introductions of the L. C. Smith & Bros. standard visible, and the Monarch standard visible.  It was also the same year as Royal introduced an innovative visible priced well below the norm.  The Fox, however, was a true $100 machine intended to go head to head with any other equally priced make on the market.

Perhaps because of problems tooling up to build the machines, the Fox visible machines were not actively marketed until early 1907.  This delay between an official announcement and the widespread marketing of a particular machine was somewhat common among the smaller makers of typewriters.

The Fox incorporated some novel design concepts - not the least of which was its use of a two speed escapement (allowing a setting for normal typists and one for exceptionally fast, steady typists.)  Another oddity was the use of two different lengths of type bar. 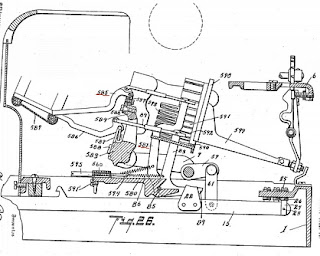 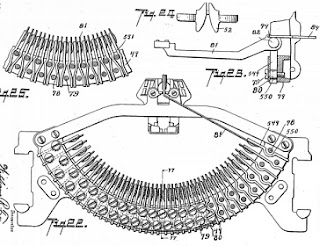 Below, a February 1906 advertisement for the Fox Visible (Will Davis collection)

The Fox Visible is most commonly found in one of two "most popular" models -- the No. 23 and the No. 24.  These two were offered at the same time for much of the Fox Visible's production, and differed only in the number of keys (number of characters typed) with a slight price difference. 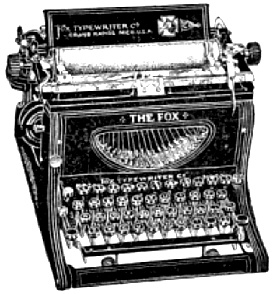 Above, April 1907 illustration of the Fox No. 24, courtesy Peter Weil.  This is the general appearance of the very earliest Fox visible machines.  These do not have a backspacer.  This illustration is of interest as it shows a No. 24 that appears to have only 43 character keys.  All known No. 24 machines have 44 keys, while all known No. 23 machines have 39 keys.  It is not certain that the No. 24 was ever actually made "one key short" as this illustration appears to depict. 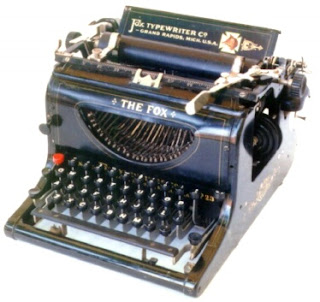 Above, a Fox No. 23 owned by Jim Dax, with serial number 0297 16297.   Other than being a No. 23 this machine matches in all details the advertising cut seen above.  This may indeed be the 297th visible Fox manufactured.

Our next view of the machines is from 1908, via a trade catalog scan provided by Ed Neuert. 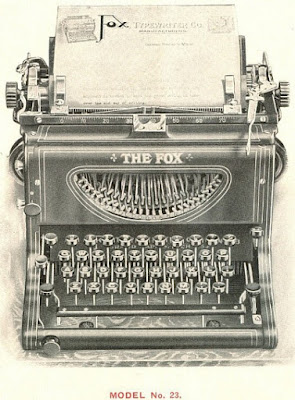 Above we see the No. 23 machine - and immediately a change can be seen.  Look at the front frame; a key is protruding through a hole at the front left.  This is the TAB key.  Fox visibles are notorious for having frames broken in this area as the penetration seriously weakens the frame here.    The typewriter has not materially changed from the original introduction about two years prior, 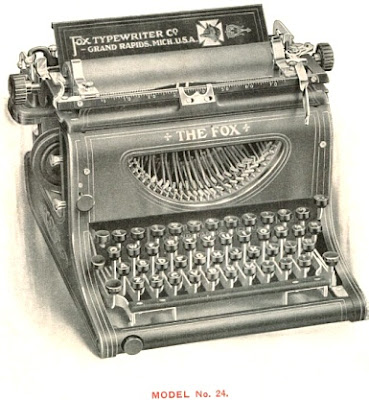 Above, the Fox No. 24 as depicted in Ed Neuert's 1908 trade catalog.  The unique appearance of the Fox visible machines when compared with anything else on the market attracts many collectors.

Note the solid, one piece keytops (black, with white lettering) and elaborate pinstriping. 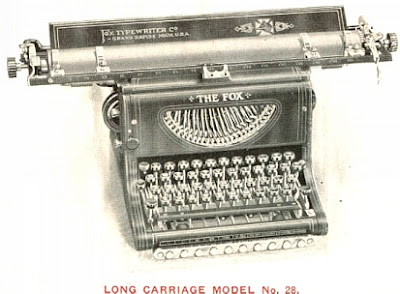 Far less well known to collectors today are the long carriage models of the Fox visible.  In the 1908 trade catalog, the models are delineated by paper width and carriage width as follows:

All of the wider carriage machines had the same keyboard as the No. 24.  The decimal tabulator shown on the machine depicted above (a No. 28) has actually been found on a Fox No. 4 blind writer acquired by the Davis Bros. and subsequently sold to Herman Price; presently we know of none on a Fox visible.  The different paper table decal on the wide carriage machine should be noted.

The illustration below is from Ed Neuert.  It dates to May 1909 and tells us that the machine had not changed in appearance or design by this time from those shown in the 1908 trade catalog. 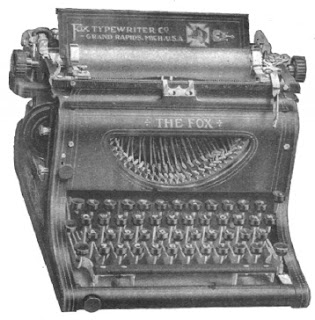 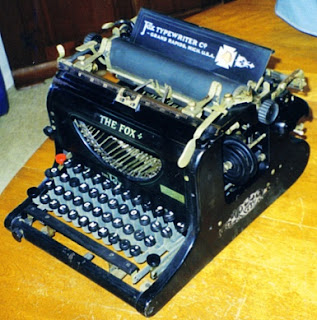 The machine above is our Fox No. 24, serial P1355 21355.  This machine matches the above illustration perfectly in all details.  Below, a view of the rear, which is as unusual as the front. 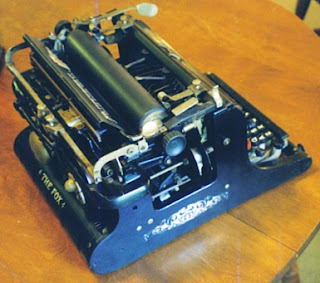 The wonderful book written in 1909 by Carl Mares (included on our reading list) notes that the Fox visible was just beginning to be fitted with a backspacer at the time.  The machine you see above does not have one; if it did, the key would be protruding from the right side of the typewriter's front, above the keyboard.  We have no illustrations from right at the time the backspacer was added.  It might be important to point out that many typewriters at this time were just introducing backspace mechanisms, and today, collectors look hard for L.C. Smith and Underwood standard machines that are old enough not to have a backspace key.

We next see the machine in 1912, again via a trade catalog from Ed Neuert.  This shows the "New" Fox visible line, which was announced to the trade in March, 1912. 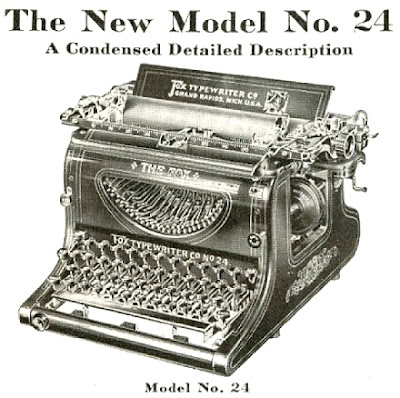 In point of fact, we know of very little that could substantially make this machine completely new; it is however improved over previous models in a number of small ways.  Note the back space key on the right side, front.  This machine also has carriage release levers on both sides of the carriage; prior to this the carriage release was only on the left side of the carriage.  The paper table decal has been slightly simplified as can be seen comparing illustrations.

Less easy to see is that the No. 24 has been modified to handle 10.5 inch paper.  On the new machines the key levers had been lightened at the front ends, which was said to give an even lighter touch than earlier machines (already known for a light touch.)  The machine had a new "double bevel" escapement, which replaced the old "two speed" escapement design and concept which had carried over from the original blind writer (upstrike) Fox machines.  The machines had a new, patented design of removable ribbon spool with a conical shape.  The keytops were altered, being a new cemented celluoid double-layer type with dished tops to fit the fingers.

The 1912 lineup is notable also for dropping the No. 23 model and the No. 27 model.  As of this point then, remaining available models were as follows (all 44 keys):

Carriage interchange on the Fox visibles was said to be fairly easy and rapid.

Our next illustration from Ed Neuert dates to 1919, depicting the No. 24 model. 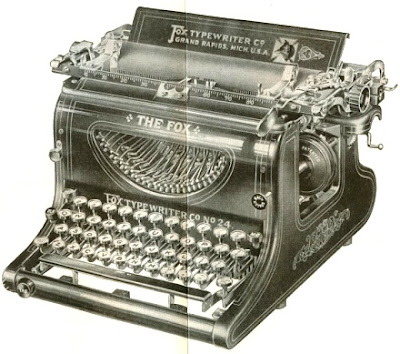 This illustration is quite interesting in that it shows a design variation that is very rarely found on existing Fox visible machines -- the keytops have been altered to a nickel ringed, white legend design with (probably) glass inserts.  This is the final major change to the machine; advertisements begin to show this alteration sometimes, but not in all, 1914 and 1915 images.  From that point on the company was in financial difficulties, and soon became absorbed first with trying to make a portable, and second with lawsuits concerning that portable.

The 1922 Typewriter Topics compendium of typewriter history tells us that after the outbreak of war in Europe in 1914, part of the Fox typewriter plant was closed and that the whole Fox typewriter enterprise was a questionable entity from that point forward.  We know that the entire operation changed hands to a newly financed corporation during this time (November 1915) and that it was eventually shut down completely and liquidated in 1922.

Fox brought out a portable typewriter, the folding Fox No. 1 in 1917 which led to a series of legal actions brought by Corona.  The Fox portables were later made non-folding and also ended in 1922. 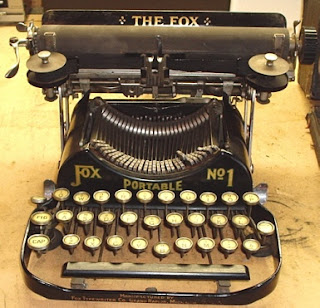 The portables did not save the company, which had a serious problem already - its standard typewriter was complicated and expensive to manufacture.  A similar fate was said to have befallen the Secor -- another good typewriter that was too expensive to build profitably if sold competitively.  Fox Typewriter Co. knew this, and filed at least two sets of patents whose purpose (clearly stated) was to convert the Fox visible standard machine to a design easier and less expensive to manufacture. 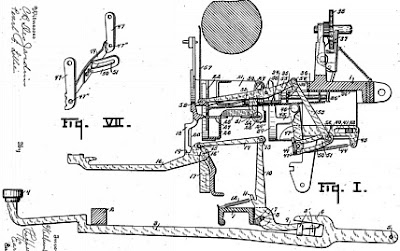 The design above was filed by Fox for patent in 1913, and concerns converting the Fox visible to a simpler design with all type bars of one length.  The key lever at bottom, hinged at the rear of the machine (right side of drawing) imparts motion to an intermediate lever which rotates clockwise as seen here from the left side of the typewriter.  This intermediate lever pulls an intermediate link, attached directly to the type bar.  A decidedly weak point of this design is the coupling between the key lever and intermediate lever, which requires side clips or tangs to ensure the pieces remain in sliding contact.  This design was never built to our knowledge. 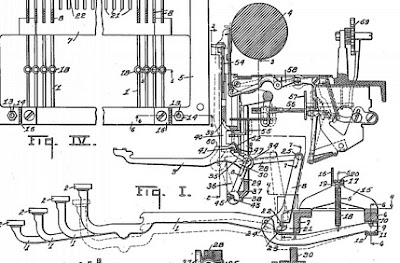 The above design for modifying the Fox visible is about a year newer than that above, and incorporates a slotted type bar segment along with a completely revised key lever and type bar mechanism much more well thought out than that previously patented.

In reality, neither of these design changes was applied to the Fox visible even though the company was recapitalized several times and reorganized once.  This author has wondered if the venture into portables, with their higher profit margin, was not an attempt to first enter that market and then produce enough cash to retool the standard machine to reduce its manufacturing cost.  We will never know, of course, but the speculation is interesting.

Fox visible machines run in serial numbers from 16,000 to about 125,000; the serial is the second of the two numbers.  The No. 23 machine disappears around serial 36,000.  Nickel ringed keytops appear somewhere around serial 110,000.   There were never any heavy, major alterations to the machine over the period during which it was made in terms of design, but rather a number of small improvements and additions.  Essentially the machine can be considered largely unchanged for its entire production run from a mechanical standpoint.

•This concludes our brief look at the Fox visible, standard machines.  CLICK HERE to read about the Fox portables, and the financial troubles that doomed the company•