While looking around in the vault for Consul machines to show in the previous post I happened into the ABC - Cole Steel area and spotted two similar cases.  One of them I knew right off, but the other one, which was identical except for being a different color, was not familiar.  Yet another machine I'd forgotten about?  Yes. 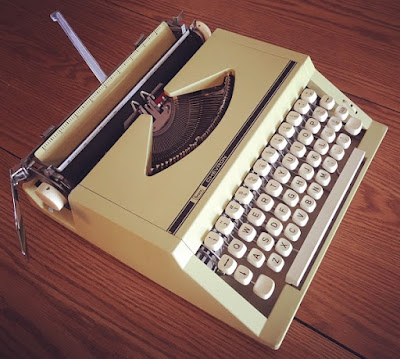 The one whose exterior I recognized is shown first.  This is the Sears Chevron of the late 60's and it's one of the machines Sears brought in as a mid-priced machine.  This all-steel-bodied and well made typewriter was made by MESSA in Portugal, and derives from the ABC series made originally in Germany until 1966.  In Sears model parlance, this is a Sears 5298.  But what was in the other case? 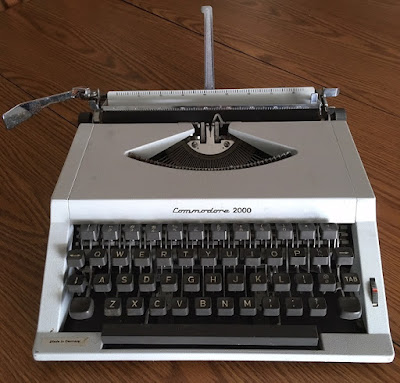 Here's the answer:  A Commodore 2000, which I almost immediately remembered after opening up the gray case lid.  I quickly tried to remember how long I'd had it, but..  nothing.  Notable on the front left corner of the machine though was the sticker seen below. 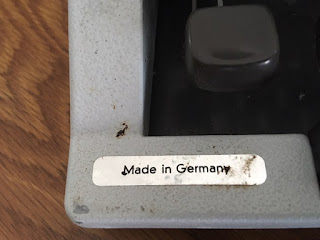 This machine was not made in Portugal; it was made in Germany!  That makes it pretty unusual, since this design didn't last long there.  I was immediately glad to have one of the newer style machines made in Germany to compliment the Sears Chevron. 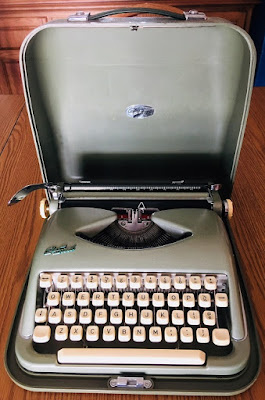 The earliest of the ABC line of typewriters had the general appearance of the "Hammertone Green" machine seen above, relabeled for sale by Cole Steel Office Machines in the United States.  This design was apparently expensive enough to make that the original maker in Germany redesigned the key lever / type bar portion of the machine while leaving most of the rest intact; the resulting redesign is seen above as the Commodore 2000 and, when moved to Portugal, the Sears Chevron. The redesign converts the front end of the machine to the modern 'four dowel' method of key lever mounting, with the ribbon bail driven off the top of the cranks formed by the key levers. 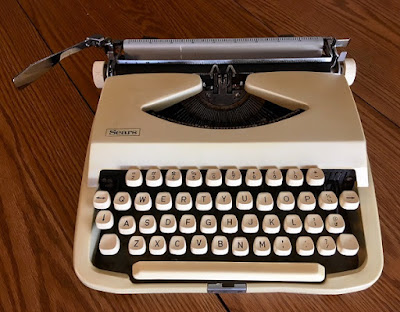 The redesign apparently did not kill off the original basic design however, which was shifted to a plastic body and sold at a lower price.  This Sears 5297 actually has a significantly higher serial number than the Chevron / 5298 seen earlier, and of course was also made in Portugal.  To be clear, the machine seen here retains the same key lever mechanism as the original ABC (Cole Steel).  It's possible the company was simply using up stocks of parts to construct this late model.

Anyway, the Commodore 2000 is one of the more unusual machines Jack Tramiel's Commodore Business Machines brought into Canada in the days before it became well-known as a computer manufacturer.  In this case the machines were made in Germany (by the original maker of the ABC line, Koch's Adlernahmaschinenwerke, Bielefeld) unlike the Consul-derived machines which arrived in pieces and which Commodore itself assembled.

These two - the Chevron and the 2000, whose fit and finish are identically good - are much better typewriters than their flattish appearance might let on.  While they're not as sturdy as larger more upright models they're everything that the contemporary Princess machine is in terms of quality and almost are in terms of typing feel.  They're solid and unlikely to get out of order; this variation is a definite improvement on the earlier ABC style with the early, different key lever mechanism.

I was reminded that this isn't the only old-style Commodore machine I had; there was also a Patria family machine somewhere down there to be found.  I eventually found it. 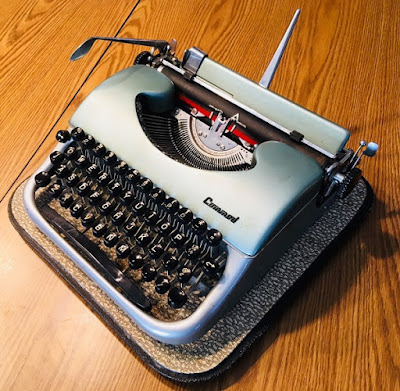 This is a Spanish-made machine, with labeling applied for Commodore (part of which has long ago broken off; I got it this way.)  These Patria family machines were more often seen as the Amaya overseas and, in a later plastic bodied variant, the Florida here in the United States.  As with the German made machine this machine was wholly manufactured by its OEM originator and shipped complete to Commodore for distribution.

Commodore registered its name for use on typewriters in 1964, although it stated in that filing that the first use of the name in commerce occurred in September 1959.  According to Tramiel's obituary in The Guardian, he formed the first version of Commodore in 1952 using a $25,000 GI loan; this was a shop in the Bronx, New York (actually the result of the buyout of a local shop, Singer Typewriter).  Tramiel moved and opened Commodore International Ltd. (later, Commodore Business Machines) in Toronto, Canada in 1955, according to the obit, "to import and sell typewriters."  According to Tramiel himself, there wasn't profit to be had solely in typewriter repair, but there was considerable profit in importing foreign made typewriters and selling them.  Soon, Tramiel found himself with a license to construct the Czech Consul typewriters and a big contract from Sears, Roebuck (Simpson's-Sears) in Canada.  Tramiel is quoted in that interview as saying that the actual application of the name Commodore to its typewriters didn't occur until 1958.

While it's the Consul machines that get mentioned most often by Tramiel in interviews, it's clear that the company was bringing in other makes to sell directly.  The company even brought in Remington standard machines which I've seen, carrying the same semi-script Commodore label.  As to the Commodore 2000, that model wasn't in production very long before manufacturing was shifted to Portugal, making it a solidly mid-60's machine.

It's always nice to head into your collection and discover something you'd forgotten about, especially when it triggers another look at a history you'd written once before (the first Commodore pages appeared on my original site well over a decade ago).  Since downsizing considerably over the last several years I haven't had much opportunity for that to happen, but it still can today.