When I say, offhand, to friends, or other collectors, or even as I sometimes do on the internet that we're up to our keesters in typewriters around here I'm not kidding. Many times you get to see the machines only when they're repaired, cleaned, adjusted and ready for typing. Sometimes you get to see specially selected machines that we put in the DTW because we think they're interesting subjects, and so these machines you get to see go from damaged or maladjusted to repaired. What you don't normally get is a tour of the absolute junkers that are around here waiting to be fixed, or used as boat anchors, or thrown in a ravine. Bridging this perceived gap, and very likely answering a question nobody asked, we now present our first-ever DTW Wrecked Typewriter Report. 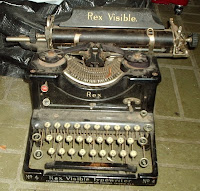 Rex Visible No. 4. Serial number 42980. This machine is in fairly bad shape; not only is one of the feet cracked off of it, we don't have the foot. It was this way when we found it at a large antique mall in Ohio, and since we love Harris and Rex machines and the price on this thing was something stupid like $5 I bought it. It's worse than just that frame problem, though; the shift is absolutely jammed through what was very likely a total misunderstanding of how the shift / shift lock override works on one of these things (for those who don't know, there is nothing intuitive about this functionality on the Harris/Rex standards) and sometimes you'll find these with the shift jammed. It's worst when the levers are really bent like they are on this one. There are other problems with this machine, too; I think maybe two or three type bar links are off, or broken. I didn't look again. This machine will likely get parted out since the fatal problem of frame breakage without the missing piece dooms it. However, we are still looking for a Rex with the side-button ribbon selector and if we had to get a really bad one we would absolutely use as many parts out of this one as needed to make a working machine. So I guess it stays. Heck, we've had this one a couple years now. I think. 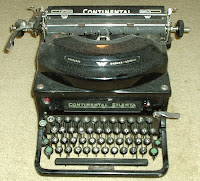 Here is our Continental Silenta. This is one that will be going up to Your Typewriter and Computer for a good tanking. The machine is not among the worst here, but any type of thrust action or Noiseless machine needs to be really really clean, in our experience, in order to function properly. This one was very dusty and dirty when we got it, and I can see it's gotten a bit worse since whenever it was I left the dust cover off of it. Oh, well... This was at one point supposed to be the designated 'Very Next Machine' to go up there for a soak and I honestly can't remember what happened. It's been a while. 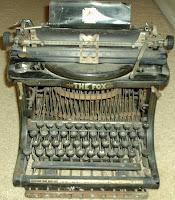 This machine is another one I bought at an antique mall. I think. What we are looking at here is something kind of interesting; it's a Fox No. 4 Standard, which is the original style of Fox that is an upstrike or "blind writer." What's unusual about this one is that it has a built in decimal tabulator (with denominations up to one hundred million.) I don't recall seeing too many Fox machines with decimal tabulators; I'm not calling this one rare, but I am saying I myself haven't seen too many. This is another one that I got home and designated as that "Next Big Project," but like so many other ones it got shelved for reasons I cannot recall. Sometimes things happen in bursts and some machines get forgotten! I do recall now that when I looked at this one the first time, the price was right about at that magic cutoff "speed of sound" number for me and my spending habits, but when I realized that in addition to its lid (no base) it also had the decimal tabulator I quickly decided to buy it when that little bell went off inside that says "I don't think you see a lot of these." We'll see; now that it's on HERE, they'll pop out of the woodwork. 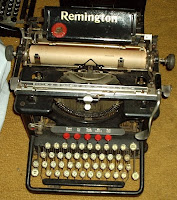 Here is one I don't think we've ever shown anywhere either. This is a No. 10 Remington Standard with five-key decimal tabulator. What is interesting about this machine is that it is actually a 10S variant - in other words, this machine is late enough that it has a slotted, solid one-piece type bar segment instead of the individually mounted type bar bearings that the No. 10 was introduced with in 1908. On the European Typewriter Project site, we showed Tilman Elster's 10S that very clearly has a letter "S" on the front, above the top row of keys. This machine doesn't look like it ever had that there before. It seems to work all right (not great, but all right) so I'm not too sure why it never got on any of the websites. I didn't pull it out to fully test it though; that is something for a later day.

Hey-- I think I found something that isn't a junker! 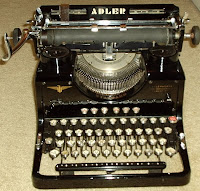 This is what looks like a 1930's Adler Standard machine, and it's really in good shape! Now I'm really confused -- however, this was stuck away in a corner that got buried pretty quickly with other machines and that would explain why we had this one cleaned professionally (it's really clean) and adjusted. This thing seems to work fine, and look closely - a QWERTY keyboard! That means I can put it through its paces without having to temporarily retrain my mind. What's more, this thing is segment shifted so it's sure to be pleasant. Once again, I have no recollection of having put this machine on any of the sites and I cannot think why not. I'll make sure to test this one on this site soon.

Well, that's enough looking through the debris field, detritus, and flotsam for one day. There are plenty more machines to be covered that ARE fixed.. and lots, unfortunately, that aren't. There's a brass framed Underwood around somewhere, and a matching parts machine for it with iron frame. There's a parts Reliance around somewhere too. There are at least two beat to death portables around too that will be a good source of small fasteners. But enough! Onward with machines that don't need to be fixed, at least for a while.
Posted by Will Davis at 6:32 PM