We've just spent an hour and a half unpacking something very special... and something that we're in an unusually good position to examine directly and comparatively. Rather than bore you all with text, let me take you along on the ride! 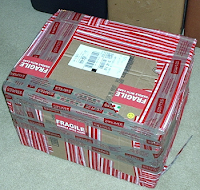 First we see the object at hand before unpacking. This is a Harry A. Smith No. 4, which is purportedly in its original shipping crate, with some tools and paperwork. Now, let's recall for a minute that there's no such thing as an 'original' Harry A. Smith typewriter unless it's the machine based on the Blick-Bar; thus, when we say "original" shipping crate we have to be slightly cautious. But nevertheless we've already got a good idea what we have here, so let's continue opening. This thing was bulletproof with what felt like miles of tape around it. Good packing job! 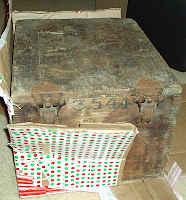 Here I've gotten enough of the outer cardboard packing and the tape pulled away to reveal one end of the wooden shipping crate. We can see a number on the crate; this is exactly what you'd expect given the knowledge that the machine inside is actually a rebuilt Victor. Victor shipping crates have the serial in this location. This one says 3544. That sure seems like an early serial number right off the bat, but let's go on. 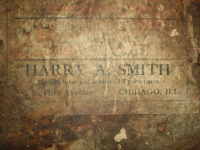 Now we can see that there were as many as five stickers applied to the top of the crate, which are all but unreadable now in terms of any useful content. But we do see clearly that this is the product of one Harry A. Smith, 231 N. Fifth Avenue, Chicago Illinois who describes himself as "Rebuilder and Jobber of Typewriters." The term "jobber" as used back in those days most closely means "wholesaler" to us today.

Here we see the newly acquired machine (still in its crate) on the left, next to our Victor No. 3 and its original crate. Do you see what notorious "rebuilder" Harry A. Smith has done? That's right. He has chipped off the area of the crate that says VICTOR and the area along the bottom that gives the original location of manufacture. I am not too sure you can see this comparison anywhere else in the world - but look! It's clearly what has happened. The areas of the crate on the left are literally chiseled away. Amazing!

The seller said there was some original paperwork for the machine, not in the best of shape but present and discernible. We find a three-sheet, single sided set of instructions for, as is labeled, the "Smith Model #4" and there are also two fragments of an illustration used for parts location. Remember that all pictures here when clicked blow up larger -- and we'll provide another view of the diagram sheet such as it is below, much larger. 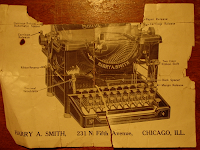 Notice the name "Smith" on the paper table. I only know of this decal or lettering variation on two machines; there was an Emerson at the Milwaukee Public Museum, which was shown in Beeching's "Century of the Typewriter" which had this exact label on its paper table, and then there is an illustration I have on my website showing a Harry A. Smith No. 12 (again another relabeled Victor) from an ad, which has this exact style of decal. So then, this machine is a Harry A. Smith No. 4 and it also has this label, being the third model I know of with it. I believe all other Harry A. Smith relabeled Victors have different paper table decals. If you know of one other that has this style, please let us know. Now back to the process.. and the picture I didn't show you which I took before getting the envelope of paperwork out. 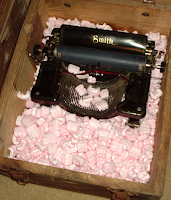 I think all of you out there who have a number of standard antique machines, who are familiar with open sided frontstrikes and who have used packing peanuts know full well what this picture really means. For those who don't, this is exactly why it's now 10:40 PM as I am writing this and this is also why the ABC continuation won't appear until tomorrow.

Here I'm using the original cleaning brush, whose bristles are many decades gone and which is now really just a handle, to poke these C-shaped styronuts out of the machine. This would eventually take lots of machine inversion, three pairs of pliers, a linkage I found in the bottom of the shipping crate, and my stainless steel Zebra F301 pen to remove from literally every area inside this typewriter. I might never have seen peanuts so well compressed into a typewriter. Maybe. But hey- except for a bit of old paint loss on the top, this machine is in near-mint condition. I can't complain about the shipping- the machine's great. 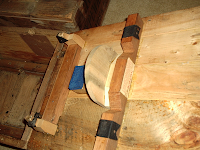 Here is the inside of the shipping crate lid. Original felt still in place; note the semi-circular piece to hold the type bars down. Looks very much like it did when it was new. The outside of the crate has done its job protecting the inside and its contents over probably ninety years or so. 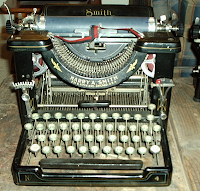 Harry A. Smith No. 4. Serial number 5324. Rebuilt and relabeled Victor Standard No. 2. Here we finally see the typewriter, without packing peanuts and dusted off but still needing a good cleaning. We can quickly see the open nature of Victor No. 1 and No. 2 machines; note the space bar on this machine that is not full width, and note the presence of a backspace key (the bar in the center above the keyboard -- not a tab key!) It's clearly visible where Harry A. Smith's workmen painted out the Victor name on the front, and the "V" emblem on the paper table and replaced these with Smith's own labeling. The machine is in great shape and the ribbon was even threaded right when we opened it up! The machine surely has not been used for many decades and probably hasn't seen the light of day in many decades either.

On the left, the Harry A. Smith No. 4, serial 5324. On the right, Victor Standard No. 3, serial 9573. In the future, I fully intend a part by part comparison of these two machines (Victor No. 2, Victor No. 3) and the Victor No. 10 you've seen in an earlier post on this site. This should be interesting to collectors who have never really compared all three, and will surely be to us. But for now the direct implication of this photo is all to obvious; Harry A. Smith's deceptive practices early on in his career could not be made any more obvious than they are right here. Not that he didn't straighten out and fly right -- he did. But this is the beginning of the story; how Smith did business in the first part of his career. 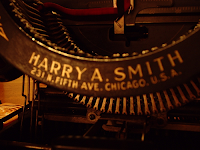 In the immediate future I hope to do a full roundup of the various Harry A. Smith Victor rebuilds, by serial and by model (both Victor and Smith model numbers) in order to determine just what was going on .. it seems there are now four identified Smith model numbers for rebuilt Victors. Whatever the case, it might be instructive and considering the labeling variations found on the various Harry A. Smith machines it will make for an attractive photo montage. 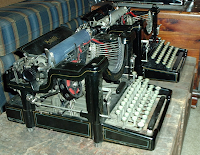 One final picture for now; the Harry A. Smith No. 4 sitting on its crate, next to the Victor No. 3 on its crate. We hope you've enjoyed this little trip with us and hope you'll look back again when we try to get more details on the various Harry A. Smith / Victor rebuilds on line.
Posted by Will Davis at 7:15 PM