As some of our readers know, we have more typewriters around than you can shake a stick at.  Some of them have been received and been immediately unpacked and put on the Internet.  Some get put aside, repaired, and then examined for articles.  Some get shopped, commercially, where they're completely disassembled and tanked, then reassembled and adjusted -- while others (which you've seen on the old "Davis Typewriter Works" site pages) we do ourselves.  Some get forgotten entirely and then are unearthed as a sort of re-surprise.  Some are wrecked.  A couple, scrapped.

The sorriest category in some ways is that of machines in "deferred repair" status, which are those that we need to fix but just never get around to fixing.  Well, that category got reduced by one today. 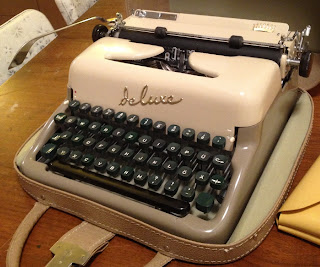 Here's a machine I got years ago off of German e-Bay.  The machine was in perfect shape when auctioned, with carrying case and tool kit but no instructions.  The machine is simply labeled "deluxe" (note that in proper reference, these are all lower-case letters) and has no other identification on it whatsoever.  There is an interesting little gold crown on the paper table.  I have yet to do any real research on who distributed it.

The machine of course is a relabeled CONSUL, of the variety most normally known as a Model 1511 or "Consul Deluxe" if sold in original trim.  This example is not in original trim, carries no brand name, and in fact does not even say "Made in Czechoslovakia" on the back.  We know it was sold in Germany, and it has a proper German keyboard.  The two tone paint is quite attractive. 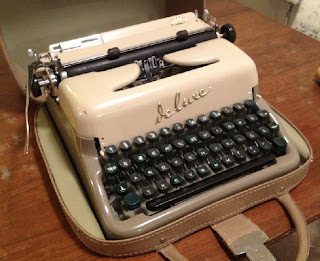 The serial number of this machine is ZP211239, which is among the very highest known to this author for any of either of the old-style Consul bodies.  (For a primer, see my old original page on Consul portables.)  Tilman Elster had a machine in the ZP range with a serial in the 216,000 range, labeled at Markus Elster's "plustype.de" website as a Consul Deluxe.  I can neither confirm nor deny that the Elsters' machine matches this one.

As you might be able to tell from the photos above, this machine was not received in operable condition.  Dropping of the not-too-well-protected box led to the front frame of the machine being deformed essentially in two ways; it was dished in along the front, more so to the right than in the center, and the entire front frame around the keyboard was translated to the left somewhat.  This rendered the frame of the machine into a rough parallelogram, instead of a rectangle.  It got put away just like that, but try as I did, I couldn't forget about it.

The photos above show the machine after I used a hand sledge on the machine for about ten minutes by myself.  (You'll want to use a towel on the machine to avoid damaging the paint!)  Remember in this type of machine the adage that if it got bent by being dropped or hit, it can get unbent the same way.  And "broken" covers all kinds of  "doesn't work" scenarios ...  and a machine with a frame bent badly enough to hold up the space bar and jam it into the lower row of keys (as this was when I started) is not going to ever get un-broken if you don't bend the frame back.

It turned out that one person wasn't enough.  I had to wait until Dave got into the act, so that one of us could hold the machine very steady up on the workbench, while the other hammered on it.  And look at the result from late this evening! 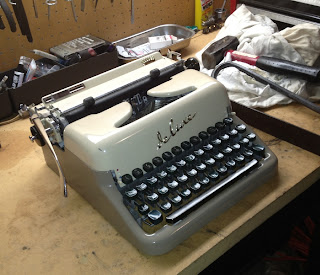 Here you see the machine this evening after a second application of force.  The frame is square -- we used the large carpenter's square to assure us of this.  Dave straightened the frame the rest of the way in steps, and then I re-formed the space bar support arms and a couple of key levers.  All of these work fine now.

Of more interest than that is the fact that the escapement of the machine was jammed prior to the second session.  I had determined that the space bar could move freely and could move the linkage to the rear of the machine, but nothing beyond would move.  I'd decided that after we got the frame square, I'd go into the machine to see what I could find.  Well, after the second session, when we sat the machine back on its feet, it worked!  Space bar and keys tripped the escapement, and the carriage advances smoothly and predictably.  Sometimes, a judicious application of force is just what the doctor ordered.  (Your results may vary.)

Since this is a Deluxe model, the platen pops right out with the action of one lever.  It also has the "magic margin" style lever-set margin stops.  All of this is visible in the shot below, which I took earlier today.  The cover over the mechanism just pops up and swivels back. 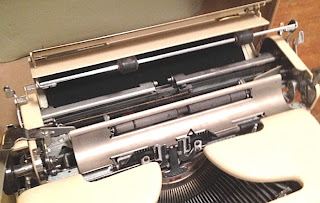 You might be able to discern that this example does in fact have the inscription "DE LUXE" in red letters on the type bar segment, below the print alignment fork.  On this model, the paper tray with rollers that you see lying in the carriage also just lifts right out.

So, now that it is fixed up, it'll be time to get a ribbon in and test it out.  Already of course I can tell that it feels just like the other machines of its ilk that we have, and so it'll be a good machine.  What is interesting to me about it of course is its different decor - which makes it all the better then that now it isn't one of those machines we regret not having gotten to sooner.

For more information - there's also a CONSUL page at the European Typewriter Project website, which Thomas Furtig, the late Tilman Elster, and I built years ago.