A small amount of buzz has been generated this week in collectors' circles with the discovery of a Visigraph.  This is an exceedingly scarce and relatively obscure typewriter, which was essentially perpetually (in the trade papers) in a state of purported imminent success and wide sale for a period roughly 1912-1919 but which in reality did not sell in total more than about four or five thousand machines.

We'll show the unpacking of this typewriter because it's an example of the best case scenario:  The seller was experienced in dealing and shipping antiques; the packing instructions I gave were thorough, completely detailed and made in a step-by-step procedure; the seller packed the machine just about exactly as described; and finally, UPS handled the box with exceedingly good care so that there was not one dent or crumple on the outer box.

The instructions of course were the standard double-boxing, with a layer of bubble wrap not less than two inches thick over the typewriter on all sides, top and bottom, and an outer box with at least three inches of dense packing peanuts or crumpled newspaper on all six sides surrounding the inner box.  In the inner box, extra protection was afforded the carriage area, and the return lever.  The front frame was well enough protected that no breakage occurred; the machine arrived here in exactly the condition in which it was discovered. 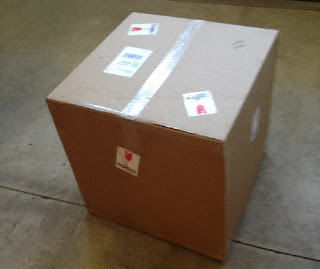 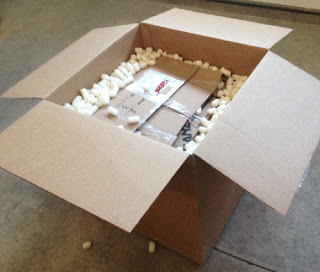 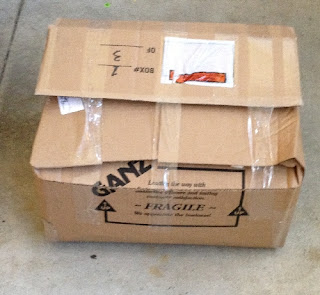 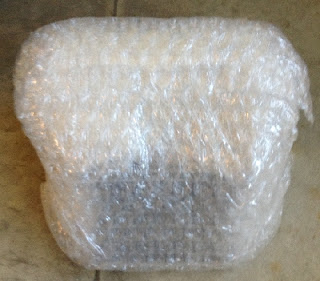 We see above, in order, the original outer box; the outer box opened and several inches depth of packing peanuts shoveled out; the inner box removed; the typewriter finally out inside its protective layering of bubble wrap -- which in this case included lots of the large-bubble size overall, with a good deal of added small-bubble type wrap specially protecting the carriage area of the machine.  Typewriters shipped with this level of concern and care are unlikely to arrive damaged.

Now, we'll take a look at the machine.  We'll save our historical and full technical analysis for later installments on this acquisition; for now, we'll just give our initial impressions. 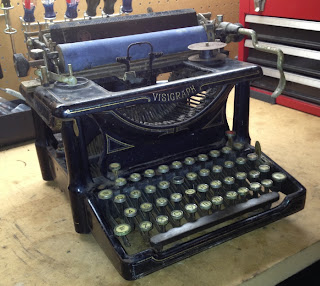 Visigraph, serial 12970   This is the first view of the machine after unpacking and placing on the garage workbench.  The machine presents generally the expected appearance of a standard four bank front strike typewriter of the day, and has a frame shape in that overall class most commonly represented by the L. C. Smith & Bros. machines; in other words, a visible writing machine with horizontal type bar basket, unobstructed view of the writing, and a full front frame crossmember (above the type bar rest point) but with margin stops and other appurtenances behind the carriage. 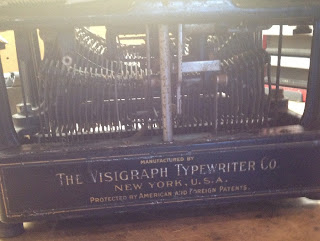 The decal on the rear appears exactly as one would expect, describing the machine as "Manufactured by The Visigraph Typewriter Co. New York, U.S.A. - Protected by American and Foreign Patents."

Immediate inspection revealed the presence of rust, pitting, debris, dirt - in other words, the generally expected conditions to be found on a typewriter this age which has just (for whatever reason) been unearthed.  We began immediately to apply various cleaners and oil to both remove grime and halt further degradation.

The serial number of this machine is 12970, which places it more toward the end of known Visigraph serial numbers than the start.  The range of serial numbers of known machines leads us to believe, at least for the moment, that production began with serial number 10,000 and ended around 14,000 or perhaps, very generously, maybe 15,000 --- meaning that over the roughly eight years this machine was on the market it didn't sell over 4000 to 5000 units.  (Known machines are from the low 10,000 range to the high 13,000 range.)  This example is the eleventh documented machine in existence today; it is a "new find," and was not previously in a collection. 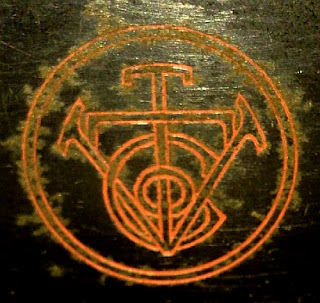 Above, you can see an extreme close-up of the very interesting Visigraph Typewriter Company emblem on this machine's paper table.  Sometimes this appears (on machines and on illustrations of the machines in ads and trade papers) on the left side of the paper table, sometimes on the right.  This machine's is on the left. 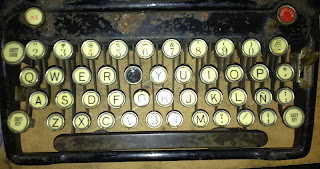 Here is a view of the keyboard of Visigraph 12970.  Note the Ñ key to the right of L on this machine; normally, this would be a : and ; key with other symbols outside of that.  On this machine, the colon / semicolon is shifted all the way right on the second row.  We'll be examining the keyboard differences between known machines in more detail in the future.

The cleaning of the machine and general investigation looked as you see it below after about ten minutes. 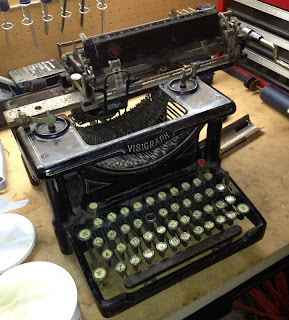 The carriage of this machine falls into that category of those best described as "platen instantly removable," which in this case involves small levers at either end of the carriage; the platen then lifts out vertically.  The ribbon spool found on the machine on the right side is original; another different pair were included with this machine by the seller as they were found with it.  That pair includes one much later Smith-Corona metal spool with ribbon safety pinned into it; perhaps an attempt to get the machine to work later, with one original spool missing or discarded.  The paper tray with rollers lifts right out and is seen just to the right of the machine.

After about fifteen more minutes of what we might call 'emergent preservation,' the machine was in the condition you see below. 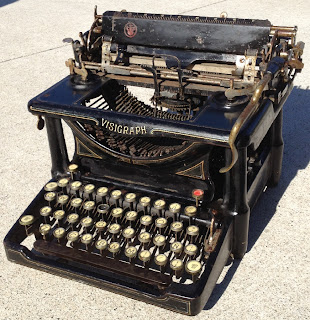 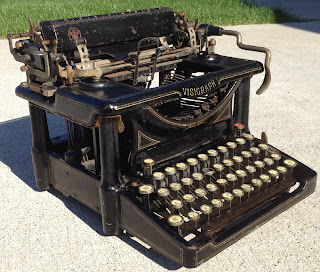 The machine went right back into the shop for further cleaning and investigation; the photo you see below is how it was left overnight.  The carriage removes quickly with operation of two thumbscrews under the machine's top deck. 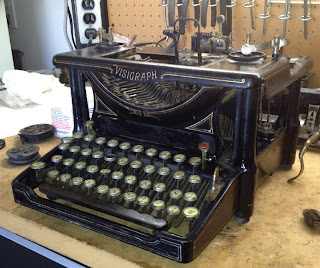 We'll have a lot more about the "scarce back then and even scarcer now" Visigraph in future installments on this blog, so make sure to check back.

FOOTNOTE:  We made reference earlier to the visual similarity between this machine's frame design and that of the L. C. Smith & Bros. standard.  Below, you see L.C. Smith & Bros. No. 2 serial number 106744-2 (mfd. 1911) from our collection for comparison of the overall frame features.  Mechanically, of course, the two machines couldn't be much more different than they are! 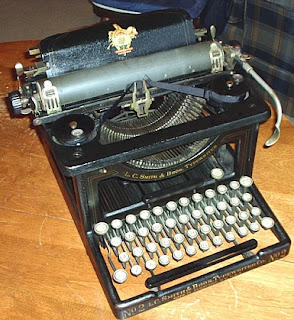 For more information:  We covered the Visigraph (back in 2006) in then-known detail in the large body of work that covered the dawn of 'Visible' typewriters.  Click here to see that page; scroll down, as the Stearns and the Visigraph (unrelated to each other) are on the same page.  Information being collected now will, in all likelihood, supplant some of that found in the article linked.