Yes, you read that title correctly.  The manual typewriter continues to prove itself to be an entity unwilling to die - and I am myself beginning to wonder if our continued declarations over the last decade about the manual typewriter's spot on the timeline of product life have not been premature. 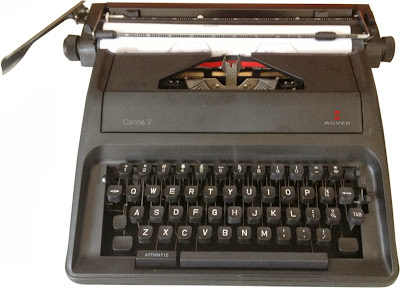 Above, you see the Rover Carina 2.  This machine was previously only distributed under the Olympia name with the same model designation.  However, you will see at this link that this machine is advertised as I write this as a "2013 New Model 11" English Typewriter."
The site page you see is part of an export opportunity page I've used for years to track Chinese-made machines produced by Shanghai Weilv Mechanism Company, which includes machines formerly manufactured by Shanghai Golden Bay Typewriter Company -- whose production appears to be either folded into the former company's name, or else the company evolved into the present one.  Several models of typewriter are available.  Machines like that you see here are indeed derived from the old Olympia Carina series, which originally were Nakajimas from Japan.  There are two other basic designs.  This design is apparently the old Olympia Traveller C design which I believe at last was made in Mexico and appears derived of Silver-Seiko heritage; this design is the old familiar Rover / IMC design familiar to those who have perused my website pages on Italy.  Robert Messenger has done a great deal of additional work on this lineup, and so has Georg Sommeregger.  (Their sites are always linked in our blog roll, so check them out frequently.)  You can also find an alternate full list of Shanghai Weilv products at this web page.
THREE "heritage" designs still in production in 2013.  Not one, but three confirmed for sale!
Some of the export opportunity listing sites give the majority market for manual typewriters as South America / Latin America and the Asia region -- in case one wonders where these are really going.
Further, and mostly in the 'bad news' department...
Marshall Sewing Machine Industrial, Inc. of Taiwan entered production of mechanical typewriters in 1996, and while they're still listed on this page, most of the newer export opportunity websites only show sewing machines .. and the company profiles on the newest sites have deleted reference to anything but sewing machines.  It's questionable how many, if any of these were ever actually made.  This also appears to be based on the Olympia Traveller C.
Ningbo Duodashi appears to have quit its DUODASHI brand of typewriters; Ideal (Jinan) and Ideal (HK) Products don't have the former GENERATION 3000 et al listed any more at large and the ROYAL version is no longer listed at Royal's site. (The Royal and Olivetti machines have begun to appear widely at overstock sites, and Olivetti's site no longer lists any typewriters at all.)   Zhangjiagang appears to have disappeared.
Chee-May (Goh's) still appears to be sitting on all the back stock I've been mentioning for years.  The now-semi-legendary "Model 100" still appears here as the KOFA 100.  Here's my page on this very interesting machine.
I'll try to keep an eye on the continuing situation regarding what's actually being manufactured and make regular updates.
----------
Background links:
For a couple years I kept regular updates in progress on the old website concerning real time developments in the manufacturing of mechanical typewriters.  Click here to see those pages, which cover the 2005-2007 time frame but which include some background that might be of interest relative to machines seen above.
Wang Pai Precision Enterprise Company proudly advertises aluminum type bar segments.
10:10 AM by Will Davis
﻿
Posted by Will Davis at 7:10 AM