Friends, I spent most of the last week attending, and working at, the American Nuclear Society's 2013 Winter Meeting in Washington, D.C. and had absolutely no typewriter time at all.  During that trip a box arrived here - a machine I'd won on e-Bay because it made me curious.  I unpacked it after my return, and now you get to see it too.

The machine appeared at first sight to be a member of a long-known and still-researched family of portables made in Europe.  I identified that family years back, originally calling it (for lack of a better name) the Oliver Courier family -- since that model was the best known.  I also called this the "Euro-Portables" family at times.  Later, it was discovered (I believe by Richard Polt?) that the original machine of the whole lot was the Patria (made in Switzerland) and the family was renamed the "Patria family."  Again, it must be noted that this term is a construct of modern day researchers and NOT an original term.  It's used only to identify a group of similar machines made in different countries to the same basic, internal mechanical design.

Throwback photo:  Research underway back in early 2004 in preparation for receiving the Voss Privat shown on my site.  All the family members I owned at the time were deployed to develop the differences. 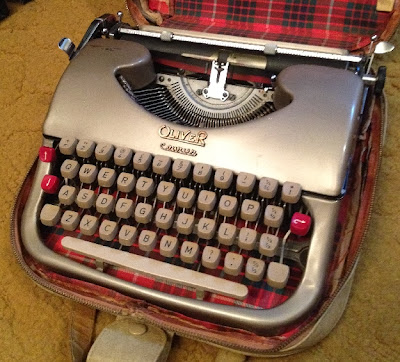 Above, Oliver Courier serial CF78557.  This machine was made one month before production of all Oliver machines ceased; it dates to April, 1959.  It has some features not seen on other Oliver Courier machines. 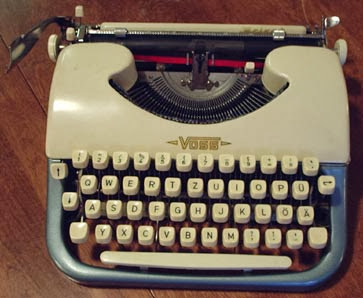 Above, Voss Privat serial 197611.  This machine incorporates the 'last ditch' or final alterations to the design of the machine that were dictated by Ernst Voss.  See here for details.
It should be pretty plain by now that I find this family of machines intriguing, and have for years.﻿

Of course, I had to wait until after my trip to examine the machine - and it proved to be a very interesting unit in a number of ways. 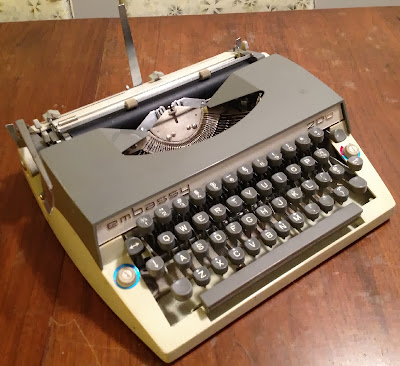 Embassy 200  serial 100209
Above, the Embassy 200.  The machine has keys right where you'd expect them to be for a Patria family machine - sticking out from the machine instead of up from the keyboard.  This one has two; that on the left, with double-ended arrow is margin release while the other is a jam clear key.
Most interesting are the dial controls seen either side of the keyboard.  On the right side is a ribbon selector with three positions.  On the left is a touch regulator.  This device consists of a knob, seen on the machine, with a shaft running straight through down into an open space.  There would originally (probably) have been a plastic piece mounted on this (now gone) which would have had a ramped profile, so that as the dial was turned, this plastic piece would have raised a lever in contact with it.  That lever (still in place as is the rest of the mechanism) pulls on a spring that places increasing tension on the ribbon drive bail, and thus would impart an increasing (if very slight) extra pressure against the primary key levers. 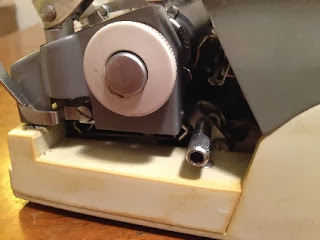 ﻿
The carriage lock, seen above, is right where I'd expect it.  The knurled knob is pulled out and away from the machine to allow the lock arm to either engage or disengage a square cutout in the carriage rail. 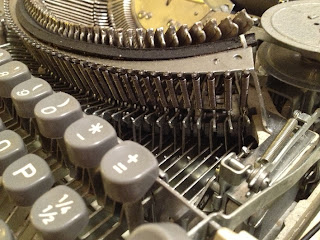 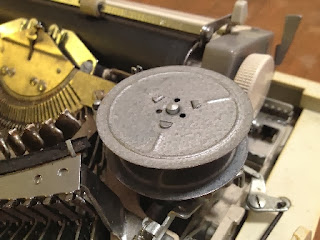 The ribbon spools are a very interesting light gray, with a mottled finish.  These have no ribbon installed (any longer) but are very likely original, I'd say.  They are not aluminum - we checked with a magnet.  The frame of the machine however is NOT magnetic, and is likely a magnesium alloy - at least, that's our guess for now.

There is no identification on the machine as to who made it or where, and no paperwork.  The immediate guess I had was that it was made in Spain, because the snap-over lid seemed quite a bit like that on my Florida.  It's clear that there used to be a sticker inside the lid, but it's long gone.

The serial number is stamped into the top of the front-most frame crossmember, below the keyboard, and is as gentle of an impression as I've ever seen.  It's really hard to see.  The serial of 100209 told me that this was perhaps the start of a new model for the company  -- but that is just an educated guess.

Discovery of a very similar looking Amaya IM/93 on Georg Sommeregger's page on the Patria family seems to nail it - the Embassy 200 is a Spanish-built machine (from Industrial Mecanografica, S.A. just like the earlier Florida) and has an English language keyboard and branding. 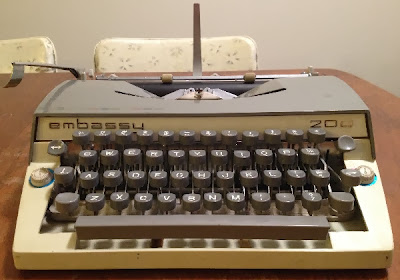 The machine is overall of decent but not great quality; the body is definitely a step down in quality from the Florida.  The distinct impression I'm given by this machine is that the maker wanted to reduce the size envelope to the absolute minimum possible, and the body tapers here and there to prevent having too much free space inside.  Interestingly, the bottom doesn't have, say, four individual feet but two very large, long rubberized feet that run front to back.  That is a peculiarity I've never seen before.  The machine was known broken when purchased, but intrigued me so much that I bid on it (and won it at the opening bid) just to see what it was.  The dial controls either side of the keyboard are very distinctive - but don't work very well.

Bashing of the machine's actual qualities aside however we can add a new model to the pantheon of modern(ish) portable typewriters, and of course add another sub-variant to the archive covering all the varied nuances of the Euro-Portables / Patria family.

All machines shown in this article in Will Davis collection.