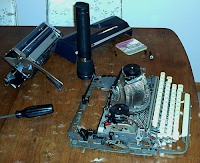 The carriage is easy enough to take off on this late-1970's Adler portable. Removal of the drawband from the carriage is easy even without pliers, and there's a slot to insert the retainer on the end of the drawband into the carriage rail assembly. Once that's done, two screws are all you need undo to release the whole carriage and escapement assembly from the machine - it lifts right out vertically. Then, with ribbon cover off, you will note four screws total holding the plastic exterior body shell ('mask') to the frame, which lifts off with a bit of wiggling to clear the ribbon selector lever on the left and the tab set/clear lever on the right. These operations left the machine in the condition seen in the photo. 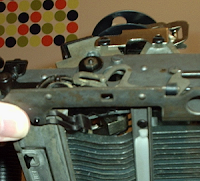 Here we see the machine, lifted up, and we're looking up under the left side. Right by my thumb you can see the offending bent piece. Once you find the screw holding it down, you'll need a very thin long standard screwdriver to get the piece off. It was easy enough for Dave and I to get it bent back to the proper profile and test operation of the lever without the screw inserted; once the screw was back in (perhaps the trickiest part, and made much easier due to lack of clearance by using a magnetic screwdriver) the reassembly and test went without a hitch. Yet another archive machine returned to fully operative status!
Posted by Will Davis at 5:04 PM