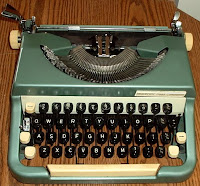 Here is a machine that I've been after for some time- actually, it's from a family that I've been after any one of for a long time. This is a British-made Imperial Good Companion 6, which is hard to find here in the U.S. since none of these was ever sold directly here. This example is serial number 6AG 816 and was manufactured in 1962. A similar 6T model, with tabulator, was also offered.

This general design for Imperial portables dates back to the early 1930's and incorporates a geared type-bar mechanism not unlike that found in Remington / Remington-Rand portables from the early 20's until 1949. On the Good Companion, the gear rack portion of the mechanism is fairly hidden by the distinctive type bar segment which is large and raised, apparently to provide better type bar alignment. 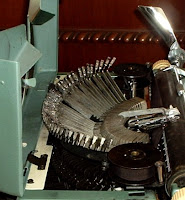 Here we see the machine, with (forward tilting) ribbon cover raised and a type bar at the print point. The black geared arc is visible sticking up through its slot in the segment. The action is taken off of the primary key levers by links that then actuate a series of bell cranks mounted in an arcuate, intermediate segment; the cranks are visible below the resting bar for the type bars. Interestingly, while the primary key levers at the center of the keyboard are essentially straignt, as key levers further from center are examined they display more of an angular nature from keytop to hinge as the hinge section is perhaps only half the width of the typewriter; outer key levers angle quite severely in toward the center as viewed from directly above, or below.

The touch of the machine is light - much lighter than superficially similarly designed Remington machines. None of that "over the top" feel Remington portables are known for exists with the Imperial, making it a lighter and speedier feeling machine. That said, the type bar blow isn't nearly as hard and getting dark impression isn't as easy. The carriage shift moves more back than up, due to the design that essentially results in type slug impact on top of the platen, and this means that gunk or poor lubrication results in somewhat slow return of the carriage to lower-case position since gravity isn't as much of a help as it is in most carriage shifted machines. We're particularly fond of the design of the carriage return lever, which hinges down for storage in a unique way but flips angularly sideways (not unlike Halberg-derived machines) for line spacing. Its chromed slipper spoon appearance is very pleasing.

Overall we like this little machine, even though it is somewhat devoid of features for a machine this late. The keytops are comfortable, the look is very 60's and so can be made to fit in a wide range of (retro or modern) decors, the sound is very quiet, the touch is light and the machine operates well. It took us years to get one in good shape and we're glad we waited.
Posted by Will Davis at 5:56 PM