Readers of my site are aware of the range of Bulgarian-made portables loosely affiliated by the name MARITSA, which is the name of the river that runs through the city of Plovdiv, Bulgaria. That city was the location of the "Typewriters Works" (sic) .. later called "Plant for Typewriters" .. which made two general ranges of typewriter over a yet unknown time period.

The two ranges were, first, a series based on the West German PRINCESS line, apparently after having acquired the tooling from Keller & Knappich, and second a range based on the Japanese SILVER-SEIKO small machines. Although neither of these Bulgarian-made series is common, they were in fact distributed at times the world over and an attentive collector almost anywhere can snag one. To learn more about these machines of both ranges, click here to see my long-standing web page. 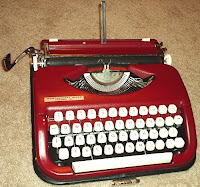 This machine adds some information to the story, and yet asks questions we cannot answer. This machine, clearly Bulgarian-made even if not labeled as such, is a Montgomery Ward Model 101. Most machines distributed by this well known department store and mail order company carried the SIGNATURE name, but not all. The machine has its instructions, and is serial number 11176474. Now for the details.

The instructions for the machine include photos labeled "OMEGA 11," which in itself isn't surprising considering that very often any Plovdiv-made machine will NOT have custom instructions made for this or that end seller. What's really interesting is that the machine also has a warranty card -- a card addressed not to Montgomery Ward but to Cheromi, Inc. This company was one of a string who owned rights to the brand name OMEGA for typewriters, and in point of fact only had these rights after May of 1977, when the descendant corporation of General Consolidated conveyed rights. Cheromi gave rights apparently off and on to Allyn Distributing through 1994 when rights were finally assigned to Corpex International.

(At left, the manual that came with the Montgomery Ward 101.) We are assuming at this point that this machine is labeled as Ward's model 101 because prior to this, the Signature 100 was sold for years (and that machine was the small, flat, very simple original Brother manual portable relabeled for Ward's.) On the rear of this new machine is a label, with the following information:

On the label, it's important to note that everything is printed in except the "3155" of the serial which is actually stamped. More research is underway on Ward's internal and - or catalog identification numbers to make sense of this label.

We might have a good date on the first use of Omega by Cheromi, since Richard Polt spotted an Omega 11 in identical color with a serial number about 1000 below this machine that went on e-Bay a short while back. It carried instructions labeled for the MARITSA. So we have a machine actually labeled OMEGA 11 with MARITSA 11 instructions, and within 1000 or so units a machine labeled for Montgomery Ward, carrying OMEGA 11 instructions.

While still puzzling in some ways, this machine does one thing; it pushes our conception of known Plovdiv production of the Princess-derived machine even later than we'd thought. We're almost sure it didn't appear in the 50's now, or probably even the 60's. More work must be done, but finally this unduplicated and somewhat rare machine has cracked the door a bit wider.