By Will Davis and Thomas Fürtig.

The ABC portable, a medium-sized machine, was introduced by Koch's Eagle Sewing Machine Company of Bielefeld, West Germany in 1955. The machine immediately stood apart from close competitors in size - for one, the Keller & Knappich Princess - due to the styling given the body casing pieces by Prof. W. Wagenfeld. The machine was not only styled, but styled from all sides and views; further, the machine was styled in a way wherein it would be fitting in any sort of decor anywhere in the world.

At left, art from a 1964 sales brochure featuring a slightly later model of the ABC which retains the original body styling. Note how the machine appears at home even in the most ultra-modern environment; such a sleek, streamlined design would fit very well in a home from thirty years earlier.

The typewriter manufacturing situation in Europe at the time of introduction of the ABC in 1955 was still essentially one of total over-demand and under-availability. Very many typewriter designs appeared in Europe in the decade following the end of the conflict (both standard and portable) and even mediocre machines were able to sell. The ABC quickly seemed to gain ground, though, even though it was not the product of an already-established typewriter manufacturer; Koch had prior to this never manufactured any typewriters at all. The machine's status would be bolstered late in 1957 or perhaps early in 1958 with the securing of a sizable export arrangement - to the United States. 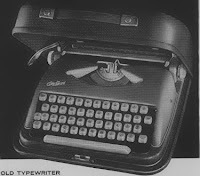 In this new arrangement, the ABC portable was relabeled as "Cole-Steel" for sale in the USA through Cole Steel Equipment Company, a well known manufacturer of office furniture and cabinetry. This move allowed Cole Steel to edge toward a position occupied by much larger companies (Remington-Rand, most notably) that offered a wide variety of office products for essentially "one supplier" service. Sales of the machine were transferred to a new division, Cole Steel Office Machines, by early 1959 with the machine retaining the same name. Item: Although some ads for the machine refer to it as the "Cole Portable," the machines themselves always bear the "Cole-Steel" brand name, and it is by that name that they're known generally to collectors today. This venture with Cole and Koch's appears not to have lasted for more than six or seven years.

In the meanwhile, the ABC had established itself well on the Continent and was being distributed both directly by the maker and through other channels such as wholesalers and retailers.

At left, further early advertising artwork courtesy Thomas Furtig (as is all ad art for the ABC in this series) from 1957. The original machine's external design is very striking, as has been mentioned and in fact many collectors finding or seeing their first ABC are surprised that the machine is as large as it is; for some reason, the styling implies a compactness which tricks the mind into assuming petiteness which does not exist. Further enhancement to the appearance sometime after introduction was made through the introduction of "hammertone" paints which gave the exterior an appearance of great depth and which in fact is superior in appearance to any automotive paint. Very few typewriters have ever been marketed with this expensive finish style. Several styles of case were also available, up to a deluxe leather case.

Retrospectively we can identify an 'early phase' of production, which might better be described as the 'main phase' since it appears to have lasted the longest, which lasted from the introduction of the machine in 1955 through 1963. During this entire time period, only one model of the machine was available at any given date. However, modifications, improvements and changes were made to the machines over time so that alterations are easily noted - but again, during this phase, there are no model names or numbers to help differentiate these. These machines almost always have a single digit preceding their serial numbers, and in the main these prefix numbers do correlate to a set of characteristics... but some of the changes are seen on scattered machines of the preceding prefix number which confuses matters.

It is for these reasons that the previously employed method of describing machines by their serial number prefixes is now discarded by us, and replaced with a much more complicated set of characteristics which identify a specific machine. However, trends and commonalities are visible after compilation of a large database of serial numbers and characteristics and the viewing of very many machines, so that a complete discourse is possible without attempting to enforce model designations retroactively that are essentially inaccurate.

THEN, it follows that first we will describe the 'early phase' of production, whose main characteristics are as follows:

-Production of the machines entirely in W. Germany
-Wagenfeld body design used on all machines
-No model name or number appears on any machine

This early phase of production saw a number of modifications to the mechanical design of the machine, which include the following major changes:

-Alteration to change from 86 characters typed to 88 characters
-Concurrent keyboard rearrangement
-Move from original with no multi-color ribbon and only a stencil cutout switch to a ribbon selector lever on the right side, and later a ribbon selector dial on the front right

We will describe these changes concurrent with the photo montages to follow, and will give serial number breakpoints for changes in that material.

All of this first phase of production in Germany used the same key lever and type bar mechanism, shown in motion in this illustration from an ABC sales brochure. The intermediate link that actuates the type bar is actually pulled by a short link that has, by virtue of the lever design and proportion, a much higher angular rotative speed than the primary key lever does which helps lead to the snappy motion these machines are often described as having. Distinctive when observed on these machines is the prominent drive bail on TOP of the entire mechanism, unusual in that day since most were concealed below in all other designs made elsewhere.

NEXT TIME: Photo montage of the early phase of production including rare name variants and very many color combinations.
Posted by Will Davis at 5:38 PM