When I left off yesterday, I'd shown you what the 'undiscovered machine' from our vault looked like as we just got to the point of opening the box to see some details for the first time. Let's first pick up the story there and finish examining the machine and then we'll place it in context. 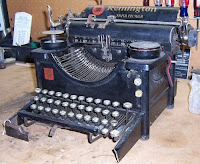 Here's the machine as it appeared yesterday, finally free of packing material. Luckily there weren't any packing peanuts involved - these are open on the back and those peanuts get in as badly as if the sides were open too. (Remember that on our blogs, the pictures can be clicked to be enlarged.) Quickly visible is that we've only got one of two original ribbon spools; the one on the left side is some kind of goofy gear-tooth edged silver tall spool that has LEFT printed on one end and RIGHT on the other. I don't know what it's for, but we'll figure that out. The type bars are very clean as in fact is most of the machine. Of course instantly we see the broken front frame, and the piece is separately bubble wrapped and included in the packing material very nicely. It's nice to see a shipper take care even with a pre-damaged article. Looks like the paper table is at some new modified arc, although we'll have to do some looking at other machines and photos too to get the right curve back on it. What's important now is that the machine appears complete enough to actually be operable instead of just displayable - except of course for that missing spool. But we have at least three or maybe four other machines that'll have exactly the same spools so that if needed we could switch out ribbons to type on this machine if and when we wanted to.

This is not a problem; we've dealt with far worse. For those who don't remember, the very first pair of machines ever seen on our workshop site sub-section included the only known dual-branded RC Allen Woodstock machine whose frame was so badly broken it would have been depressing to most who received it ... but we're mad scientists. We'd rather have this machine, even with a broken frame repair, than not have it. The fact that the official dealer handbooks and the NOMDA handbooks indicate that machines with broken frames have a $0.00 trade in value doesn't bother us much either.

NOW THAT WE'VE LOOKED THIS MACHINE OVER, let's put it in the proper historical perspective.

This machine at first appears to have no model number on it - but examination of my site page on the general line indicates that there should be model numbers on the frame. Sure enough, very close examination of the broken frame piece under varied light sources (fluorescent turned out to be the best) reveals the number "30" on the right side, as one might expect since this is a 42 key machine. So then we might call this machine the Remington Smith Premier 30. As we see on the back of the machine, the Smith Premier name appears boldly and it's clear that it was made at Syracuse, New York; this location is the old Smith Premier factory that was built immediately after the Smith brothers left to form their own new, unrelated company.

The serial number of this machine is MM10004. Surely this is a 1921 machine according to the serial number lists. At this date, the 30 and 40 models were introduced (the 30 had 42 keys, the 40 had 46 keys) and were essentially identical to the previous Remington Monarch machines. The example seen here still has individually mounted type bar bearings, and the shift motion on the type basket is upward as on the original models. Before 1926 the machines were redesigned to use a slotted solid type bar segment; in October 1926 the 30 was dropped. A new 60 model appeared in June, 1923. Right off the top of my head I can't tell you how that's different from the 40 though even though we do have a 60. I'll have to look at that one.

So then we now have another labeling variation of this Monarch-pattern machine, which appears at the very beginning of its third life. The 'first life' was that of the Monarch Visible, introduced in 1904 as a product of the Monarch Typewriter Company and produced at a new factory in Syracuse, New York, built for the new company's new typewriter. Of course, Monarch was actually a creation of Union Typewriter. In perhaps 1913 the Remington name appears on the machines, but not as the major brand. In 1914-1915 the actual manufacture of the Monarch was transferred entirely to Remington Typewriter's massive plant in Ilion, New York and from this time forward the Remington name took more prominence, essentially relegating the Monarch name to a model.

Production of this machine then had a third life, when the tooling was shipped back to the city of Syracuse, but not to the long-since sold Monarch plant but rather to the Smith Premier plant. The full keyboard Smith Premier 10 was dropped and the Monarch machine was placed in production at that plant; the machine you've seen unboxed yesterday and today is perhaps the earliest known example from that third round of production and is surely the first labeling variant.

Within a couple of years the name Remington completely disappears again from the machine, leaving only the Smith Premier name (and a spiffy new "SP" emblem too) to identify the maker. This in a way parallels the first incarnation of the machine as the Monarch. The design overall had a relatively long life in the world of typewriters, being produced at three different plants from design about 1900 to production launch in 1904 to cessation of production about 1939. That's 35 years; did any other Union design last that long in the visible typewriting era?

Click here to see our gallery of Smith Premier machines featuring many machines from the late Tilman Elster's collection. Look at the original DTW site link to find another Monarch labeling variant; link on the right.

We'll have more to come on the variants in this whole line over time, and of course the work on this machine will be shown here as it happens. Standard typewriter fans take heart - standards have returned to the DTW site! Stay tuned.
Posted by Will Davis at 4:12 PM